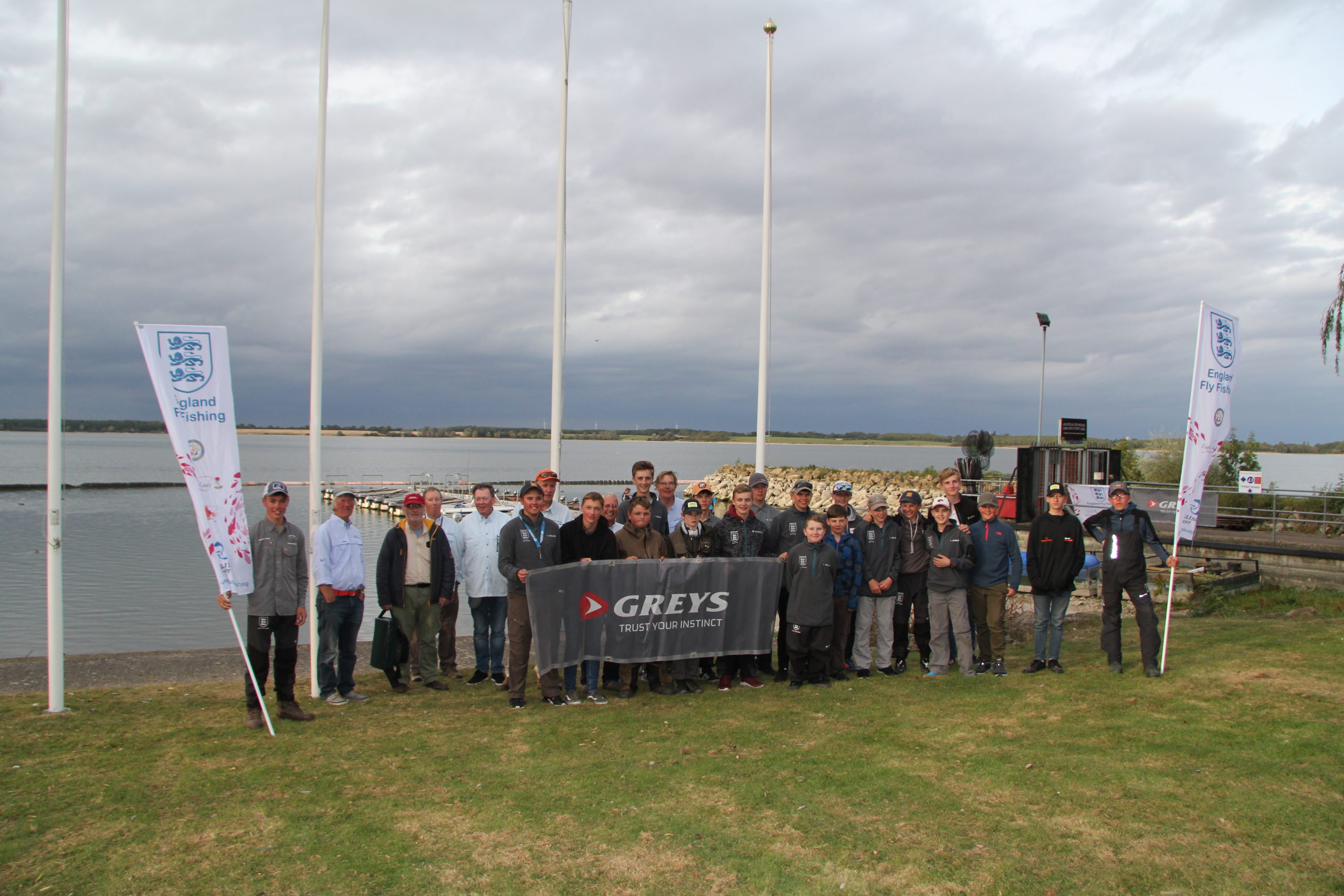 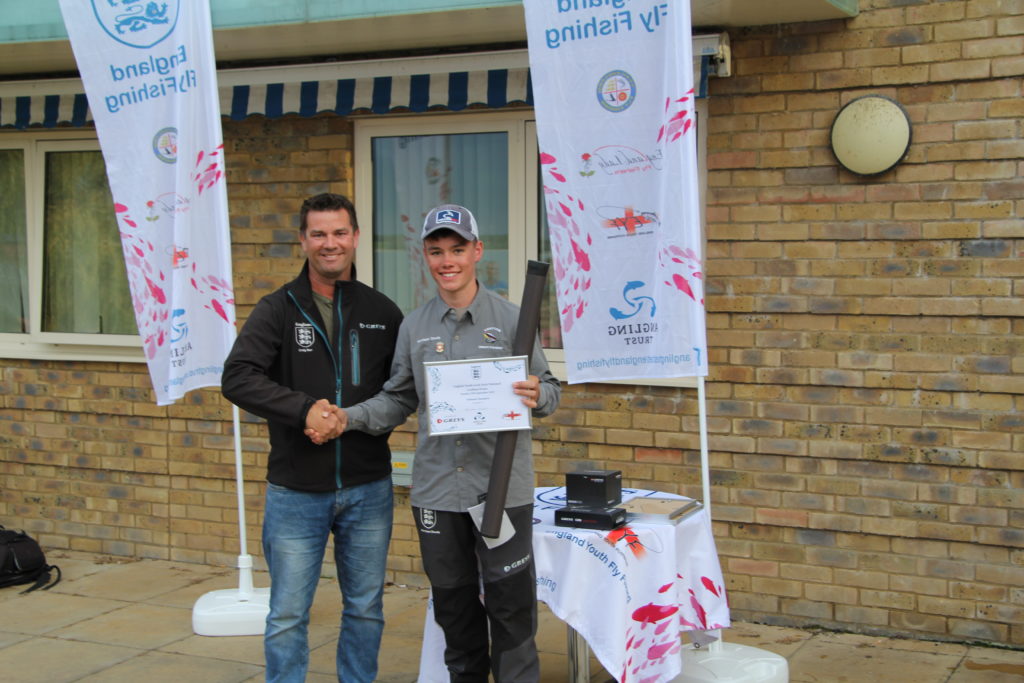 The fishing at Grafham leading up to the event had been good with the fish high in the water and keen to take when there was cloud cover. Fish location, as always, was going to be a major part of the winner’s success and as the wind direction changed in the days leading up to the match, so too did the hot spots. As always drifts onto the north shore and in open water were successful along with A Buoy to the Dam. Many of the young anglers practised the day before and had found the fishing tricky in the bright, almost flat calm conditions. On match day the wind had changed slightly coming from the west and when the boats left the jetty some headed to G Buoy whilst others made their way to A Buoy and the Dam. The match was fished to full catch and release with a boatman in each boat with the two anglers. The fish were measured with the lengths recorded on the score cards. There were two sessions with a short lunch break. The angler with the greatest combined length of fish would win the sessions fished and allocated a place point on where they finished in each session e.g. the angler who won was given one place point and so on. The place points for the two sessions were to be added together to determine the overall winner, the objective being to find the most consistent anglers. 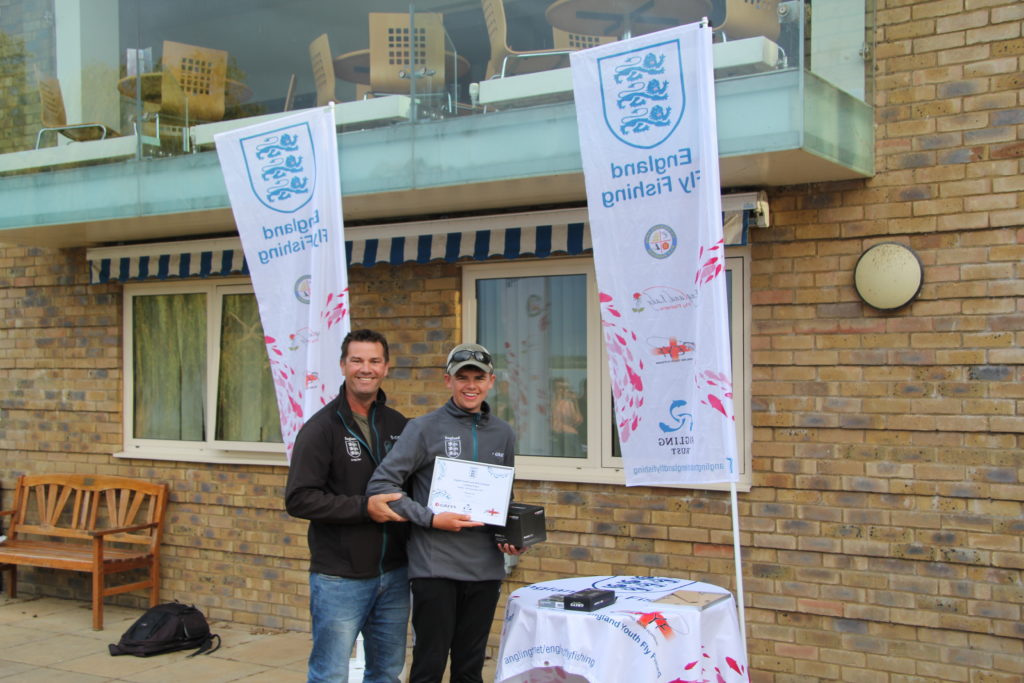 Session one started at 9.30am and at the end of this first period at 1.00pm, 43 trout had been caught with several 50cm plus fish. Out in front was Alex Jaffrey who had taken eight fish from A Buoy with Harrison Douds in second with six fish, Isaac Slack in third with four fish and Albert Coales fourth with four fish with just 11 centimetres separating these two anglers.Session two started at 1.30pm and with the anglers refreshed it was all to fish for before the 5.00pm finish. The sun was now having a negative impact with the temperatures hitting 24C and the young anglers were struggling for takes. However, the late afternoon cloud cover changed things and the fish came on the feed in the last hour and 37 fish were caught. Jamie Potts took first place with five fish in this session, with Harrison Douds second with four fish pipping Isaac Slack who also had four fish by 9cm Albert Coales was fourth. The place points for each session were added together to determine the final placings. The twenty young anglers had caught 80 fish for a rod average of four. Twelve fish measured over 50cm in length with many resident fish being brought to the boat. This clearly showed the talent these young anglers have. 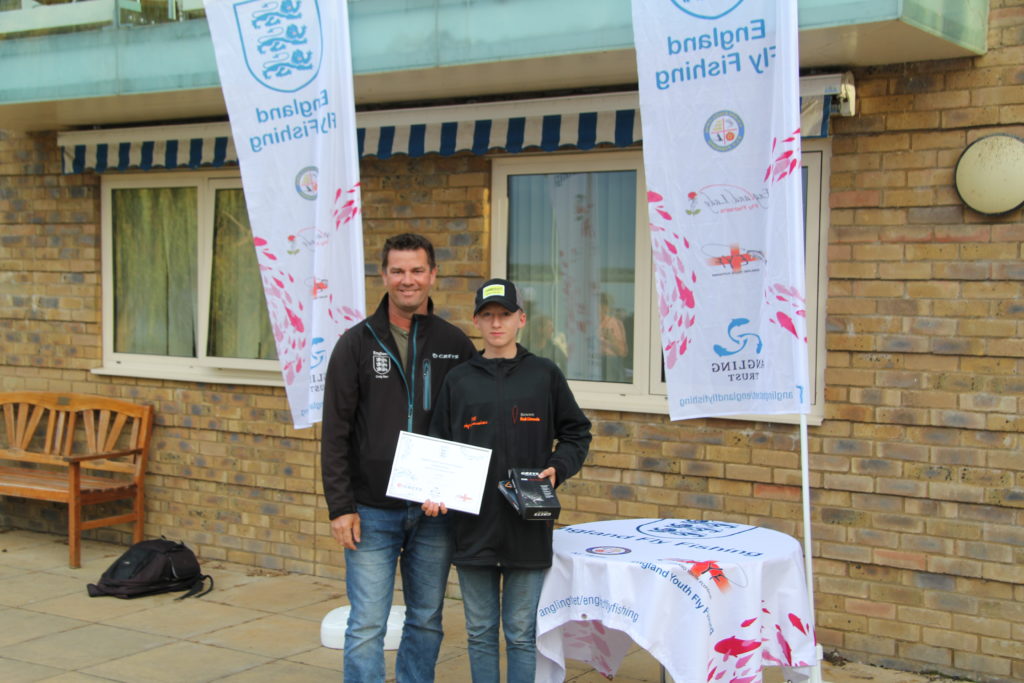 In first place, retaining the title he won in 2018, was Harrison Douds with four place points – exceptional fishing with two seconds in the sessions fished. Runner-up was Isaac Slack with six place points having been third in both sessions. Third was Albert Coales who had eight place points with two fourth positions displaying good consistent fishing. The longest fish went to Albert Coales with a trout of 55.5cm.The weather made for some difficult fishing conditions, but all the anglers fished well in both sessions with all of them having takes and fish on throughout the day.

The Angling Trust would like to thank Greys Fishing for sponsoring the event and providing the prizes for the top four and biggest fish. In addition they would like to thank the following; Invicta Fly Fishers who provided most of the boatman for the day and kindly made a contribution to a gift voucher for each angler to use at Anglian Water, Ifor Jones from Fishery Mgt Ltd for providing the measuring troughs and being a boatman for the day, Trevor Gibson for being boatman, Kirsty Marshall for her work behind the scenes at the Angling Trust and Anglian Water and its team at Grafham for hosting the event and providing a gift voucher and goody bag for each angler and finally Airflo for providing caps for the goody bag. 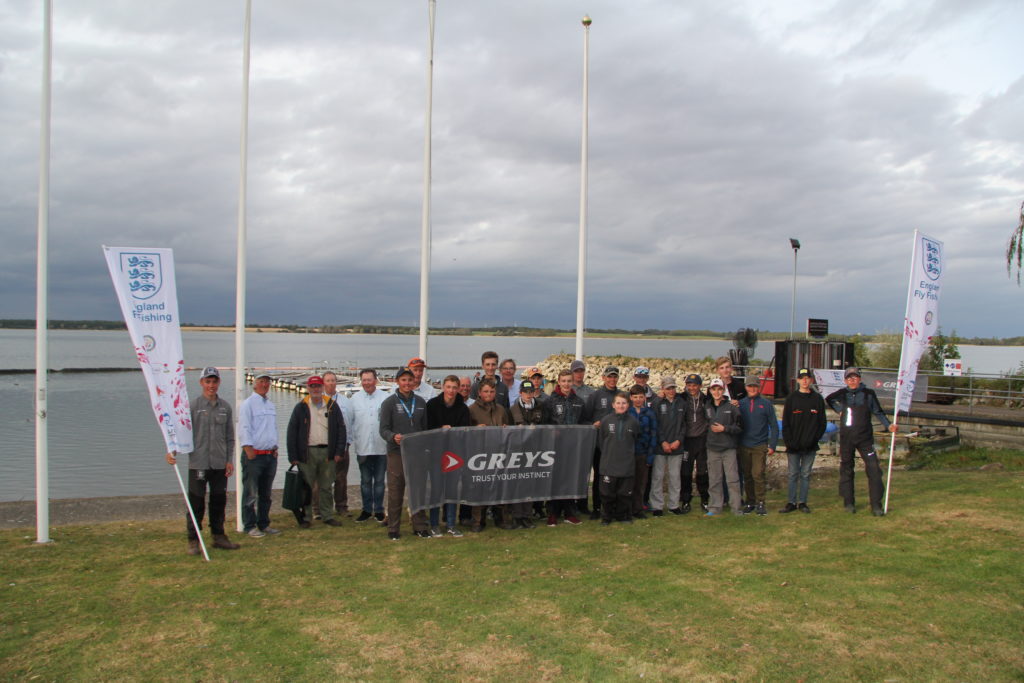 The young anglers & boatmen at the 2019 EYF National

Craig Barr England Youth Manager said: “What a fantastic day’s fishing at Grafham Water, with twenty young anglers battling it out for the 2020 Youth Team. It was brilliant to see such enthusiasm amongst the young anglers, many of whom displayed incredible ability.”

Harrison Douds 2019 Youth National Fly Fishing Champion said: I’m looking forward to a second year in the England team with some cracking young anglers all of which I would like to congratulate for fishing so well on such a challenging day. I’d like to thank the organisers and coaches, the parents and sponsors, my sponsors Fulling Mill and Chatton Trout Fishery who have helped me massively with my fishing. Roll on Ireland.”

Andy Taylor Competitions Support Officer said: “It is a credit to these young anglers who fished exceptionally well in some tough fishing conditions. A rod average of four fish, with 12 fish over 50cm, displays the talent these anglers have and the superb fishing there is at Grafham. Well done to all those who took part.” 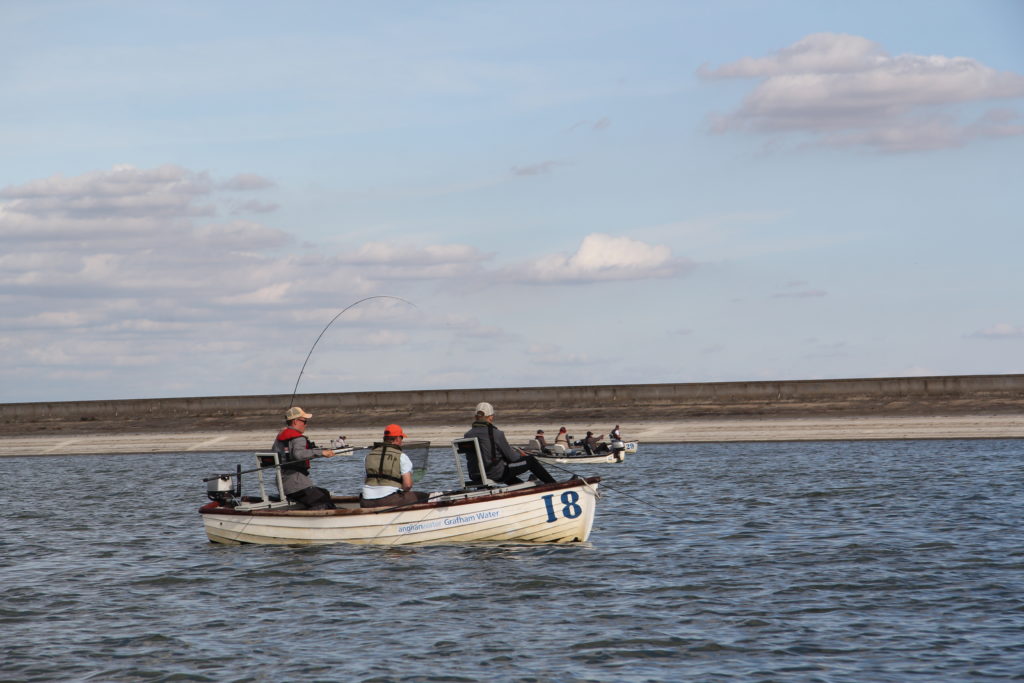 Harrison Douds nets a fish in the afternoon session

The England Youth Team for Ireland in 2020 based on the roll over from the International in 2019 and the results at Grafham are: Harrison Douds, Isaac Slack, Albert Coales, Henry Smith, Alex Jaffrey, Jamie Potts, Felix Gould, James Penwright, Oscar Hill, Jake Leake, Corey Russell, Elliot Guthrie, Tom Crawford and James Mockridge. The travelling reserve is George Clarke. William Gardner is second reserve. The squad will now attend the captain’s day later in the year before undertaking training weekends in preparation for the international in Ireland.


The campaign to save freshwater fish from elimination in Norfolk’s Hoveton Great Broad has taken a b…
Read more
The Angling Trust are sad to report the passing of volunteer bailiff Steve Allen, the recipient of a…
Read more
Winter is a fantastic time of year to get outdoors and enjoy some time next to the water. The new Ge…
Read more
The Angling Trust has joined forces with bait manufacturers Dynamite and Mainline in urgently seekin…
Read more
After a hectic and successful week navigating the consequences for angling of the government’s decis…
Read more
Martin Salter has timely advice for all anglers, along with the inside story of how we managed to ge…
Read more
The government rolled over the 2020 bass fishing measures into 2021 as we waited an outcome from the…
Read more
With anglers everywhere opting to keep it safe and local at present, short sessions make perfect sen…
Read more
The Government have now formally responded to the representations made by the Angling Trust. We have…
Read more
Following yesterday’s written communication from the Cabinet Office that fishing is to be proh…
Read more
The regulations have now been published and confirm this evening’s message from the Cabinet Office t…
Read more
It might be cold out there, but there are still some great fishing opportunities. Angling Trust blog…
Read more