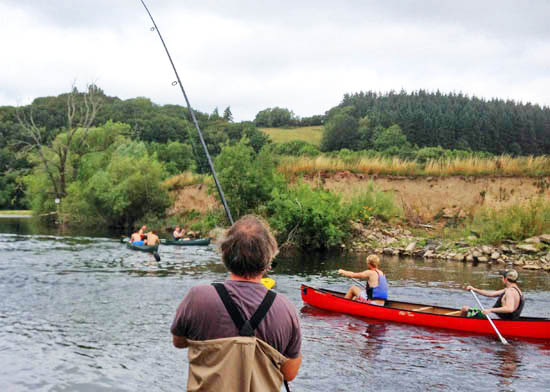 Many angling clubs and fishery owners have in recent years suffered a steady increase in unlawful canoeing throughout England and Wales which has often prevented them fishing in peace, and has affected the capital and amenity value of their fishing. There have been numerous incidents of aggressive behaviour in response to anglers asking canoeists to abide by the law.

Canoe campaigner Reverend Dr Douglas Caffyn (who is not a lawyer) has claimed publicly since 2004 that there is a general public right of navigation, based only on the conclusions of his Masters’ thesis. This theory conflicts with all the legal text books and case law on the subject. Unfortunately, the canoeing governing bodies have given it credibility by suggesting that there might be a right of access to all rivers. Many paddlers disturbing anglers’ legitimate fishing rights have quoted the canoe governing bodies and/or Rev Dr Caffyn as their justification for doing so.

The Angling Trust, together with Fish Legal, has been pressing British Canoeing (formerly the British Canoe Union or BCU) and Canoeing Wales to accept the clarity of the legal position for many years. We published “Conflict on the Riverbank” to highlight the many issues around the country and the irresponsible position being adopted by the governing bodies.

The Angling Trust & Fish Legal have long supported (and continue to support) the use of voluntary access agreements – made locally by those who know the water best – to provide managed access to rivers in ways which do not interfere with angling or cause damage to often fragile water environments. However, British Canoeing has often refused to sign up to such agreements and has discouraged paddlers from considering them, unless they offer access at all times and water heights. In doing so, they have fundamentally undermined such local arrangements by repeatedly refusing to accept the law.

To try and resolve this situation, Fish Legal commissioned legal advice from a leading QC which involved researching the law going back over hundreds of years. The summary of his advice could not be any clearer:

The Angling Trust & Fish Legal have written to the Canoeing Governing Bodies demanding that they: