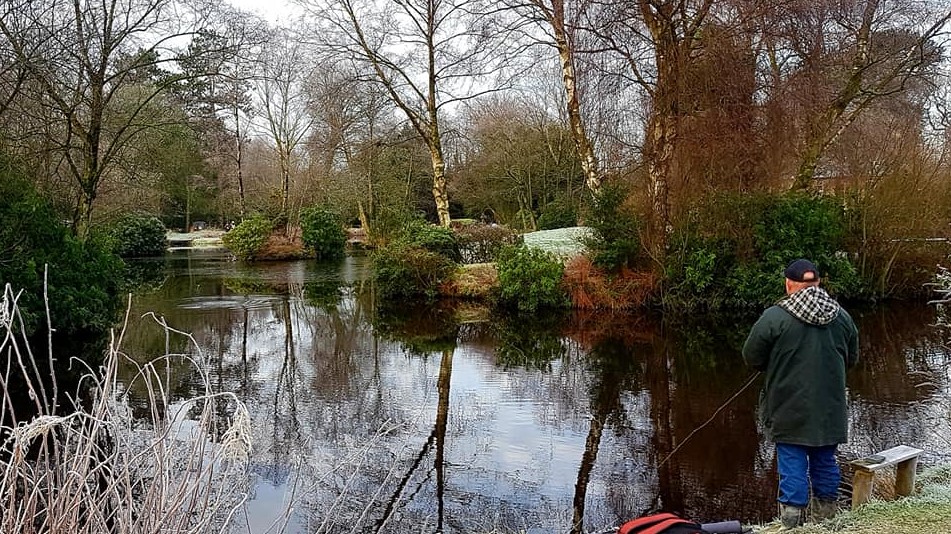 This competition consists of 3 stages

The Qualifiers
12 qualifying events will be held around the country between October and March. A maximum of 24 rods are available for each event and a minimum of 8 rods are required to constitute a heat.

All qualifiers & both regional eliminators have now been fished. The southern eliminator was postponed due to Covid-19. The National Final will be held in 2021 to select the 2022 team as no international teams fished in 2020 or 2021.

Qualification to Regional Eliminators
8-9 entries = 4 qualify for Regionals
10+ entries = 6 qualify for Regionals
Entry fee is £20 per event, there are no restrictions on the number of events you can enter. Fishing fees for each heat will be £17 and are additional to your entry fee, fishing fees are payable direct to the fishery on the day of the event. QUALIFIER REPORTS

Entry fee to the Regional Eliminator is £20 plus fishing fees of £20, both of which are to be paid via the online booking system when your purchase your ticket.

The National Final
The AT-TEFF Bank National Final will be held at Elinor Trout Fishery on Sunday 24th October 2021.
The finalists will compete for the title of National Bank Champion and a place in the 2022 Team England Bank squad.
Entry fee is £20 plus fishing fees of £25, both of which are to be paid via the online booking system when your purchase your ticket. For those who have qualified, entry for the Final is now open: Book here.

Please note: to compete in the Bank National Final you must be a valid member of Angling Trust, you can join here http://www.anglingtrust.net/membership

Rules & Briefing – Please ensure you download and read the Rules & Match Briefing below before you purchase your ticket.

All heats, Regional Eliminators and the Final of the competition will be fished to FIPS-Mouche rules. Rule Modifications may apply but they are highlighted in the event page each qualifiers. Please ensure you read the rules and any modifications before you book your ticket.

Sunday 1st November saw the rearranged AT-TEFF Bank southern semi-final held at Elinor Trout Fishery. 26 anglers took part who had qualified from the southern heats held in 2019/20. These anglers were fishing for a place in final which is to be held in May 2021 at Chigborough Trout Fishery. 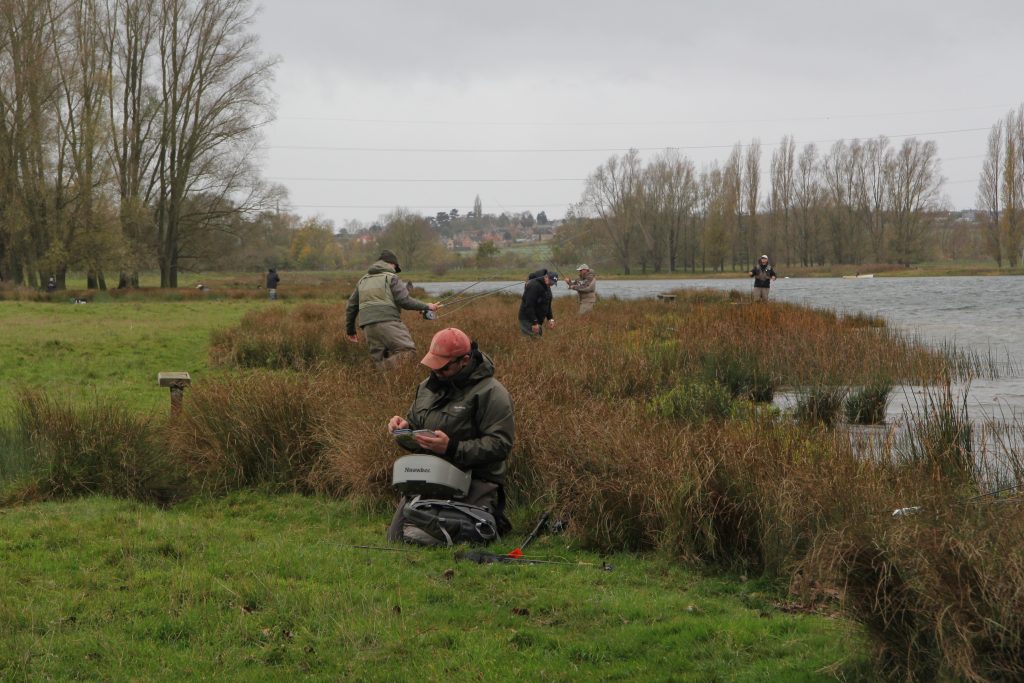 A strong, south-westerly wind with squally showers tested the anglers throughout the day especially those fishing the dam during the middle part of the match. Practice revealed a good head of fish up the ‘Brookside’ bank with fish in pockets along the dam. The fish were high in the water and floating and tip lines along with fast and slow glass intermediates being the preferred choice for most of the competitors. 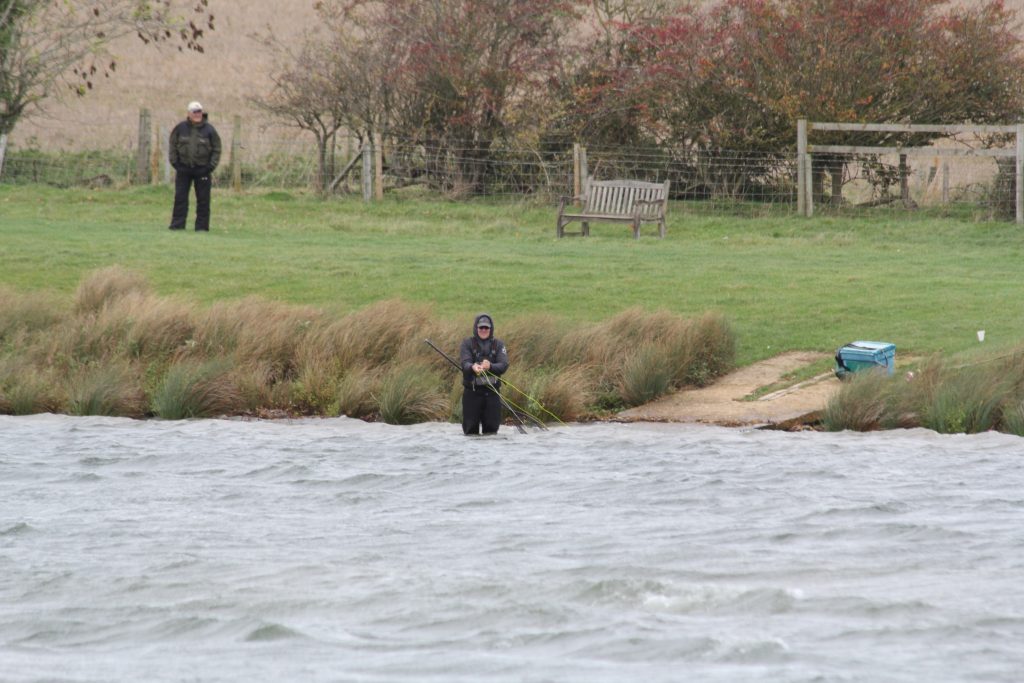 The match was fished to full catch and release with controllers marking scorecards. Anglers fished eight, forty minute sessions: four in the morning and four in the afternoon. The winner would be the angler with the most points.

Anglers were into fish from the start with many catching in the first session with the top end of Brookside Bank being the most productive along with the Dam. The strong wind made the Dam tricky to fish in the latter half of the morning and first sessions after lunch, however the pegs along Brookside continued to produce with several trout between 5lb and 10lb making it to the net.

There was a final flurry in the last two sessions as the wind dropped allowing the competitors chance to fish their pegs easier than earlier in the day. This final flurry saw many anglers move up in position with a tight finish expected at the top and for the final qualifying places. 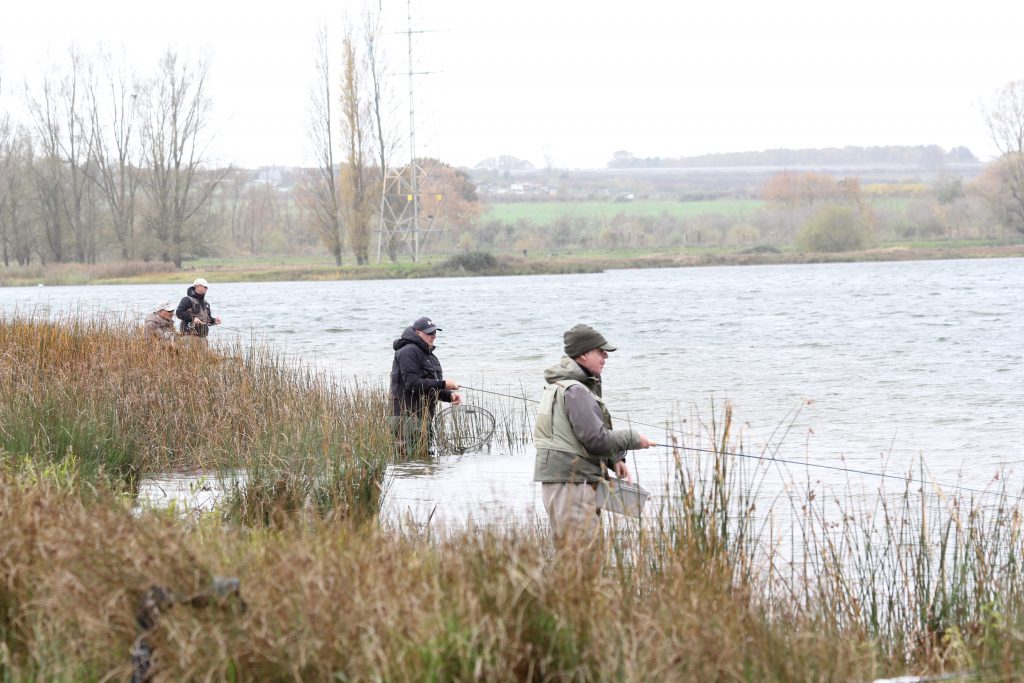 118 trout were caught for a rod average of nearly five with all 26 competitors catching. The winner with 14 fish for 20 points was David Neilson. Dave fished the indictor and his ever-reliable ‘Shammy’ to take first spot. Runner-Up was Sam Bailey. Sam fished a fast glass line and an Olive Apps catching most of his fish on the “hang” close in. Sam caught 13 trout for 16 points. Third was Ian Watts who caught 11 fish for 15 points.

The AT-TEFF would like to thank Lee Cartmail for running another great competition, the controllers who helped score for the competitors and Ed Foster and team at Elinor Trout Fishery. Elinor is on top form at the moment and is well worth a trip! Congratulations to all those who qualified and thank you to all those anglers who fished in some atrocious weather conditions.

The qualifiers from the southern semi-final are as follows: 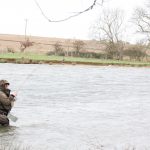 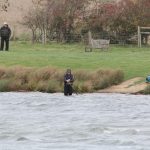 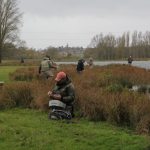 Sunday 15th March 2020 brought the first semi-final of the 2019/20 Bank National at Toft Newton Trout Fishery for the qualifiers from this season’s northern heats. 34 anglers were fishing for the top 17 places and their chance to fish the National Final at Chigboro’ Trout Fishery in Spring 2021 (rearranged from May 2020 due to Covid-19). 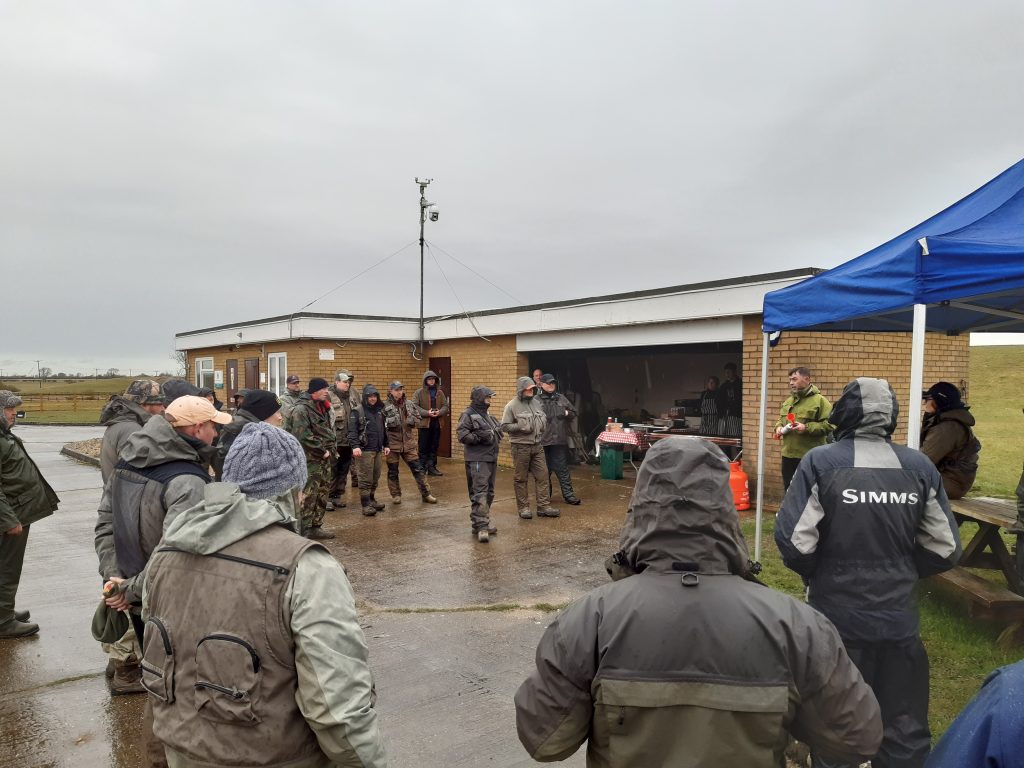 Many anglers had practiced at the venue in the weeks leading up to the competition with Di5 lines and FAB’s being the method on the rumour mill, with the fish caught at depth on a slow retrieve. As seems to be the norm for many of this year’s matches, it was wind and rain which greeted the anglers at the 8.00am briefing.

Four of the 2018/19 bank team were competing in this match. Joel Beeney took the first fish of the match at 9.04am and current National and International champion Andy Taylor took five fish off his first peg. The fishing was good for the remainder of the morning session with those anglers leading the way at lunch having taken seven fish. 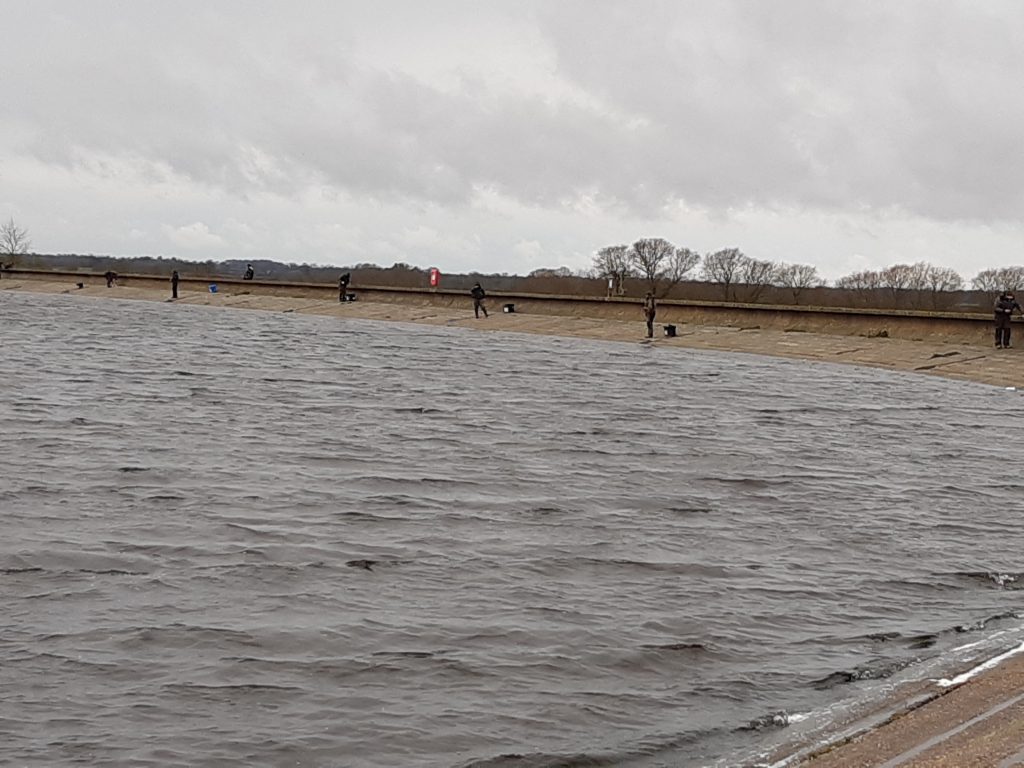 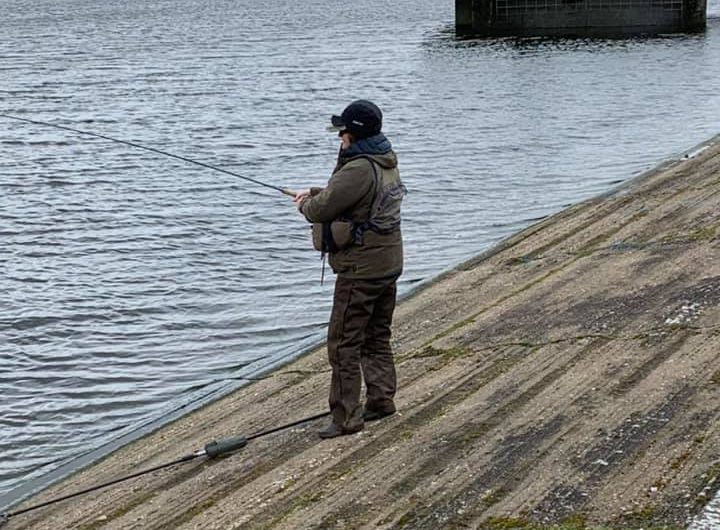 The successful methods varied with some anglers catching on the Di5 with FAB’s, whilst others caught pulling Zonkers on a Fast Glass, nymphs and cormorants on a floater or short tip line or the bung. The fish were close in with many trout taking right under the rod tip.

The qualifiers from the northern semi-final are as follows:

The top seventeen anglers will now fish the final at Chigboro’ Trout Fishery next Spring (was due to be fished 10th May 2020, but postponed due to Covid-19). Joining these finalists will be the qualifiers from the Southern Eliminator at Elinor Trout Fishery on Sunday 1st November (original date 29th March 2020).

The AT-TEFF would like to thank the team at Toft Newton Trout Fishery for hosting this qualifier and Lee Cartmail for again running a superb match. In addition, a big thank you to Neil Deakin for helping control on the west bank! 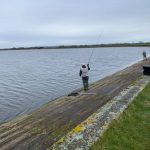 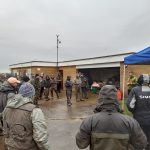 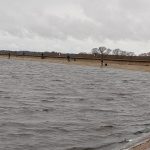 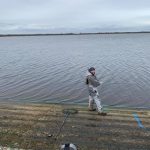 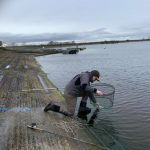