Anglers Against Litter is the Angling Trust’s campaign to provide a voice for anglers to engage with the issue of litter and plastic pollution in freshwater and marine environments. It outlines ways in which anglers, fisheries and tackle retailers can get involved to reduce and remove litter from areas where they fish. In rivers, lakes, canals, sea or estuary, the damage caused by litter pollution can be harmful to wildlife. It introduces toxic pollutions to the water as well as being an unsightly addition to our environments. We are working towards finding solutions for these issues as well as working with industry to do more to tackle and reduce the problem of throwaway plastic. Please support our campaign – and let’s tackle litter together!

Pledge your support for Anglers Against Litter

The Take 5 campaign is an initiative that everyone can get involved with every time they go fishing. The campaign is simple – take 5 items of litter home with you or spend five minutes to remove litter after fishing to help to remove damaging litter pollution from our environment.

The Anglers National Line Recycling Scheme is a national initiative aimed at encouraging anglers to recycle fishing line. Anglers can take their used or recovered line and spools to recycling bins located at fishing venues and in tackle shops or sending items by post to ANLRS.

Anglers Against Single-Use Plastic in the Tackle Trade

Anglers Against Single-Use Plastic in the Tackle Trade highlights the issues with single-use plastic in the angling trade. By raising awareness of the potential harm to the environment, we hope companies will reduce the amount of plastic produced by the industry every year. 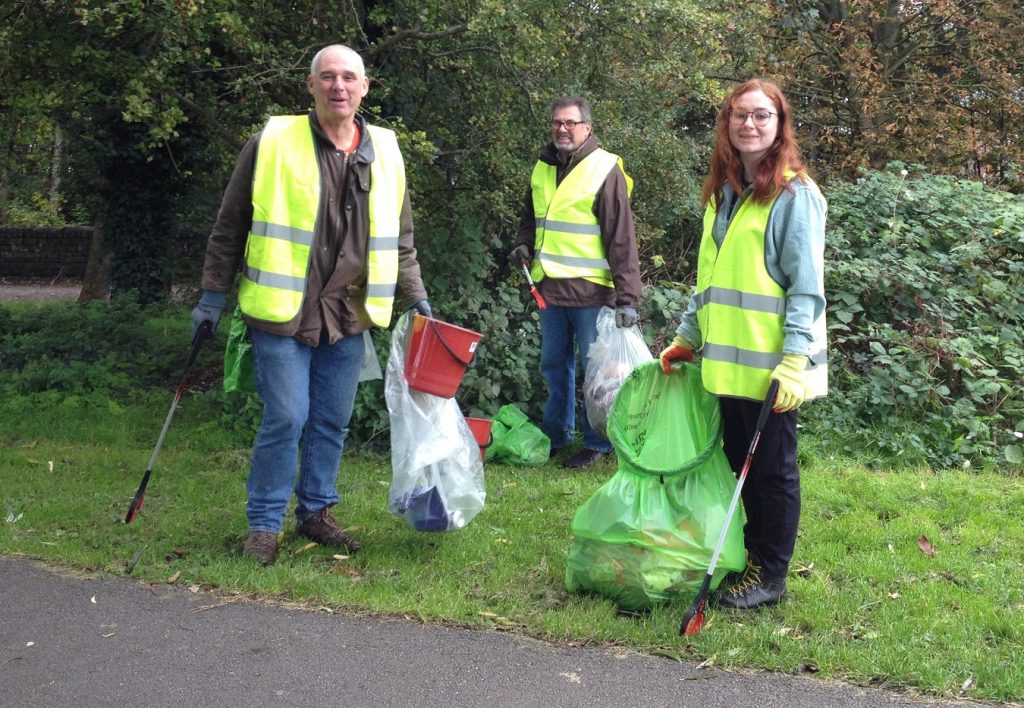 In our 2019 litter survey, an amazing 43% of you stated that you have taken part in a clean-up, and over 80% were interested in taking part in another event. To assist you in organising your own event, we have produced a guide outlining everything you may need to successfully organise your own clean up event.

Keeping your river, lake or beach tidy helps to protect the fish and means these areas continue to be an area for us all to enjoy. By following best practice, leaving no trace and doing our part to help to protect the environment, we can also set an example to encourage others to do the same.

It doesn’t take a lot of time and doesn’t require a lot of people, but together we can make a huge difference.

To ensure that we all remain safe during these unusual times, please follow the latest government guidelines on Covid-19. We have outlined some additional measures in relation to Covid-19 and litter picks.

Please let us know about your clean up

If you organise an event please register it with us.

This will help us build a bigger picture on the issue of litter in our waters, and give us valuable evidence to argue for more action to reduce litter pollution.

No one likes to see litter on our riverbanks, around our lakes or on our shores. This is why, with support from the Environment Agency, the Angling Trust encourages anglers to support the Take 5 campaign and pick up litter on every fishing trip.

Marine litter is a massive and growing problem. It can find its way onto our beaches, spoiling our fishing experience. Plastic also breaks down and can be consumed by small fish. So, please support our Take 5 initiative and pick up just 5 pieces of litter when you finish fishing. Together, we can make a huge difference. 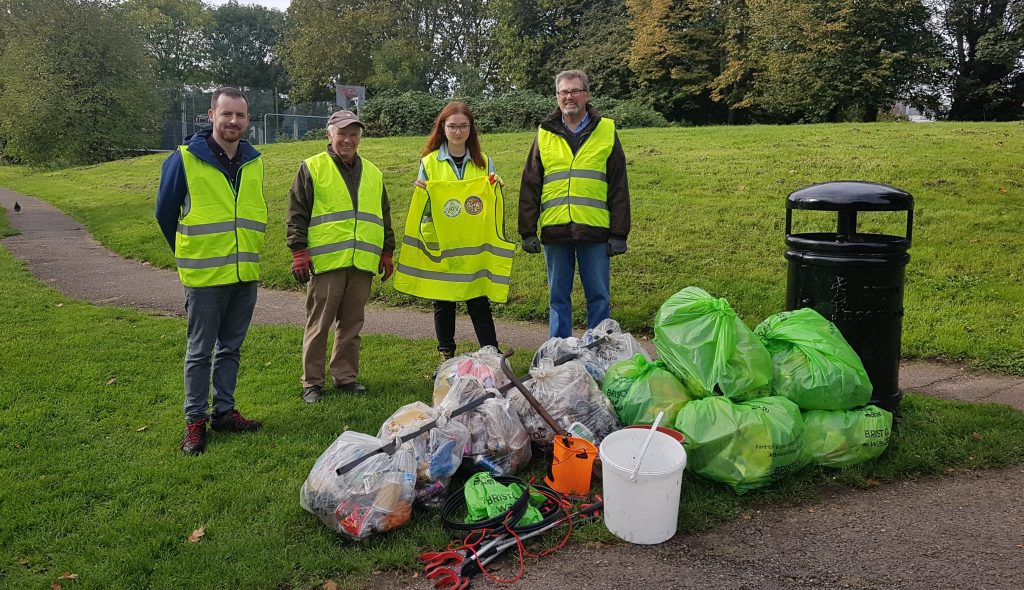 Anglers join a litter pick alongside the River Frome

Anglers fishing right across the country, no matter where or what they fish for, are being called on to back the Angling Trust’s successful Take 5 campaign.

It’s simple to do – and can make a huge difference to the environment: Just Take 5 items of litter or Take 5 minutes to remove any litter after fishing.

Litter is an increasing problem – particularly plastics – on land, in our waterways and ultimately in our seas. Anglers represent an army of millions of volunteers who respect the environment and can play a huge role in keeping our freshwater and coastal environments free of litter which threatens wildlife, pollutes the natural environment and damages the communities which rely on tourists attracted by the rich and diverse natural beauty of the UK.

If every angler in the country supported the Take 5 campaign just once over the course of a year, anglers alone would be responsible for removing 15 million items of litter from the environment.

The Take 5 campaign is run in partnership with the Environment Agency and supported by funding from fishing licence sales.

Dr Emily Smith, Angling Trust’s Environment Manager, said: “Anglers can play a pivotal role in helping to reverse the tide on increasing amount of litter we are finding on our riverbanks and beaches. By spending just five minutes to collect litter after a fishing trip, or picking up five pieces of litter on your way back to your vehicle, will stop litter being blown into the water, where it can cause injury to wildlife, or swept downstream to the sea.

“Although a lot of this litter may enter the environment through other means, anglers helping to clean up and protect the environment will encourage other water users to think more about what they are doing with their litter and adopt the same ‘Take 5’ approach.”

Please encourage your club or fishery to organise a litter pick or join in one of the organised clean-ups. And don’t forget to tell us about it and send in pictures to [email protected]

Alex Parker, chairman of Wyvern Marine Region, said: “The Wyvern Region are delighted that the Take 5 version is having a relaunch. It was one of our committee members, Phil Hyde, who came up with the original idea which at the time was well received.

“We feel that the new version, especially the tackle box sticker, could give added impetus to get the message out, especially to any unattached anglers. Litter is an emotive topic, which we all have to deal with and live with. When we leave our favourite angling marks please leave them as you would like to find them.”

Pledge your support for Anglers Against Litter
We are grateful for the support of the Environment Agency who have helped to fund posters and tackle box stickers through money received from fishing licence sales. You can pick up a free Take 5 tackle box sticker at Angling Trust events and shows we attend, or spread the message by displaying a poster.
We’ve written to local authorities in England offering support to help them tackle litter issues and encouraging the widespread adoption of the Take 5 campaign by the public. This could be through placing banners or materials at key locations, social media initiatives or socially distanced litter pick events.

We recognise that the COVID-19 crisis presents unprecedented times for us all. Whilst we are all doing our bit to stay safe and safe lives, there are things you can do at home or out for your daily exercise to help the environment.

If you decide to respool your fishing line, rather than putting the line in the house bin keep hold of it. There are recycling line bins located at fisheries and tackle shops throughout the country where you will be able to take the line to be recycled after the movement restrictions have passed. You can find your nearest bin by typing in your postcode on the ANLRS website. Alternatively, you can post it directly to ANLRS: ANLRS c/o Tools n Tackle, 11 Bridge Street, Newhaven BN9 9PH.

While you are out for a walk, run or cycle, why not take a bag with you so you can undertake an individual litter pick? If you pass any litter on your local route, by picking this up you will stop that litter being blown down the drain or into your nearby water and from there entering the river and sea.

If every angler collected 5 pieces of litter just once over the year, anglers alone could be responsible for removing some 15 million pieces of litter from the environment. So why not pledge to Take 5 and undertake a litter pick while out on your walk?

Alternatively, why not organise a small clean up with up to five other individuals? We urge this should only be taken if it is safe to do so and you are able to do this while following the latest advice on our Angling Trust Covid-19 hub to keep you and others safe. As well as maintaining a safe distance between you and others, other key health and safety measures include:

If you come across any hazardous items or fly-tipping please contact the Environment Agency on 0800 80 70 60.

The most important thing is for us all to stay safe at all time and take care of ourselves and those around us. Happy picking!