An Angling Trust initiative to sign up 50 angling clubs to take part in litter collections has reached its target two months ahead of deadline.

In total, 58 clubs across the country have pledged to take part in at least two organised litter collections and will receive free litter picking kits provided by Shimano, our Anglers Against Litter sponsor.

Shimano became the exclusive fishing tackle sponsor of our Anglers Against Litter campaign in April of this year and have been working with the Angling Trust to combat litter pollution around waterways, providing resources to enable clubs to undertake litter picks and encouraging all anglers to pledge their support to ‘Take 5’ – picking up five items of litter or spending five minutes at the end of a fishing session to collect and safely dispose of litter.

Earlier this year we set a target to recruit 50 clubs by the end of December to undertake regular litter picks. With 58 clubs already signed up and another 31 on the waiting list for next year, at least 116 litter picks will be carried out in coming months.

“Litter and plastic pollution can be harmful to fish and other wildlife living in and around rivers, lakes, canals, sea or estuary, as well as being an unsightly addition to our environment. Once again, the angling community has come together to help tackle this major issue and we wish to thank Shimano for the financial support which has enabled free litter picking kits to be provided to angling clubs.”

Shimano’s partnership with the Angling Trust supports the Japanese tackle manufacturer’s mission statement to “promote health and happiness through the enjoyment of nature and the world around us” and recognises the importance of preserving our environment to protect fish and fishing.

“We are delighted at such a positive response from the angling clubs and individuals across the country. With over 100 clubs committing to collecting litter in 2023, we as an industry should be proud of our community and the proactive approach to dealing with this blight on the landscape and making the environment more enjoyable for all.”

If you are on the committee of an angling club and your club is willing to commit to at least two litter picks a year and send us details and photos, you can apply for one of these amazing kits that includes 10 Anglers Against Litter Hi Vis vests and 10 litter pickers.

All kits for this year have been allocated, but we are now taking expressions of interest for 2023. Just drop an email to: [email protected]

The Anglers Against Litter’s ‘Take 5’ initiative is run in partnership with the Environment Agency and funded from fishing licence income. 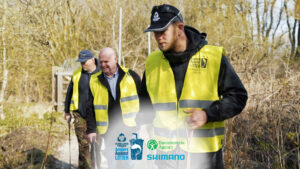