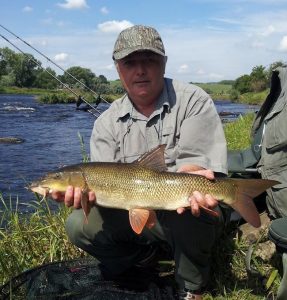 The annual Christmas raffle is one of our most popular activities and it is a key contributor to our fundraising efforts.  This year the lucky first prize winner was John McLellan (pictured above) who scooped £2,000 cash with ticket number 96662.  John, a member for 10 years has generously donated £100 from his winnings back to the Angling Trust which he joined because he “wanted to support an organisation which protected the interests of anglers, fish and the environment”.

The second prize of £1,500 tackle courtesy of Daiwa was won by Vicky Fidlin, from Grays, Essex with ticket number 63346.

Winners of £100 Daiwa tackle were:

Winners of the £50 Fishing Megastore voucher were:

The Angling Trust & Fish Legal would like to thank Daiwa and Fishing Megastore (Glasgow Angling Centre) for their generosity in donating prizes and for everyone who bought a ticket and took part.