Funded by Environment Agency fishing licence income, the FMAs have assisted fishery managers on both rivers and lakes not only with licence applications, but with practical advice about measures to help tackle unsustainable avian predation by using innovative techniques such as the use of lasers and lifelike mannequins to deter birds, as well as exclusion tactics and fish refuge.

The FMAs also advise fishery managers on how to protect their fisheries from otter predation, including advice about fencing. They are also now licensed by Natural England to trap and remove otters that are trapped within appropriately and securely otter fenced still water fisheries.

In this video, Steve Fearnley of Leeds Amalgamated, and Richard Bamforth, Fishery Management Advisor, discuss the work that the Angling Trust does to help make fisheries secure from predation. This work and the Angling Improvement Fund grants are funded by the Environment Agency through fishing licence income. 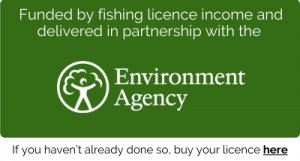 Progress of the Fishery Management Advisors

After a three-year Angling Trust campaign to persuade the government to take action to tackle unsustainable avian predation, three Fishery Management Advisors (FMAs) were appointed in 2014 to cover the whole of England.

In April 2016 the then-Environment Minister Rory Stewart concluded that the pilot project had been successful and that the initiative should continue as it had been successful in providing advice and practical support to angling clubs and fisheries over the previous two years about how to protect fish from cormorants and goosanders.

The Minister also confirmed that where appropriate the new area-based approach to issuing licences for lethal control will continue, rather than requiring every individual fishery to submit an individual application. The Minister noted that the system has worked well and that it benefits fisheries, which are an important part of the rural economy.

The expert advisors have also provided invaluable help with the paperwork required to carry out lethal control safely and responsibly either on an individual basis or via an area-based licence, which helps with co-ordination of control throughout a catchment.

Jake Davoile, FMA for the south of England, explains: “There are currently 16 area-based cormorant licences in operation across England and all have seen the benefit of working together, and sharing knowledge. These include stretches of rivers, stillwaters, and fish farms, bringing fishery managers together for the greater good – Some have even expanded across whole catchments.

“Collating knowledge on the cormorant population is vital, as we get a clear understanding of the feeding patterns of birds, and can develop bespoke strategies to deal with predation. By working as one and utilising the cormorant’s incredible vision in flight, we can maximise the impacts of a shooting strategy if one is required.”

“By coordinating shooting, we aim to condition birds in the most efficient manner not to predate on our valuable fish stocks. We have also seen great success using lifelike mannequins, which mimic the river keeper. These are completely weatherproof, easy to move, and by shooting from behind them, birds are conditioned to fear them, thus further protecting your fishery.”

Richard Bamforth, FMA for the north of England added: “Some area licences extend along 92km of river and include multiple stillwaters. Alongside the clear benefits of a coordinated approach, this strategy also provides us with robust data to take forward to Defra. Remember, if the combined need for lethal control exceeds the current national limit, the limit will be reviewed.” 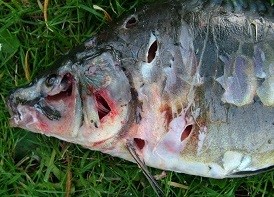 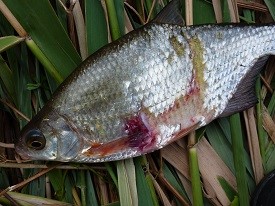 Cormorants and goosanders can often leave fish with serious wounds, which can later become infected and eventually prove fatal 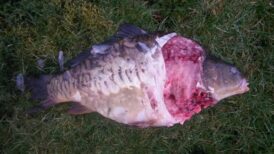 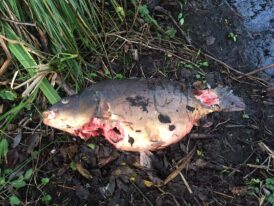 Otters will tackle carp in many venues, particularly in the colder months when fish are less active

From Lancaster, Richard graduated from the University of Newcastle-upon-Tyne with a degree in Countryside Management. His subsequent career has spanned habitat & water management for a large Water Company, project manager for a Heritage Lottery Project which included working with farmers, other land owners and government bodies and worked with sporting landowners and conservation organisations. A keen trout and coarse angler, he also enjoys taking family fishing.

Jake has extensive ‘hands on experience’ in reducing cormorant numbers in circumstances where lethal control was not possible on a reservoir through extensive research and practical application. A graduate of the University of Birmingham in Environmental Science, he specialised in freshwater ecology and the habitat requirements of fish. A keen coarse angler, recent captures include a stalked brace of carp at 35 and 40lb as well as an 8lb 12oz chub.

There is some fantastic advice available from the Environment Agency on building a fish refuge and a floating island: