The usual big shoals of bream failed to show at this year’s Tidefest Angling Championship held on the tidal Thames in London at Strand on the Green (Kew), Chiswick and Barnes. However, some quality roach were landed including fish to over 1lb 8ozs.

The annual fishing match, now in its ninth year, is part of Tidefest – a celebration of the recreational importance of London’s River sponsored by Thames Water and supported by Hounslow Council. Other activities included paddleboarding, kayaking, river dipping, boat trips and historic foreshore walks but participants were asked to give the anglers a wide berth where possible.

There were 40 pegs across four zones at Strand on the Green (x2), Chiswick and Barnes. The winners benefitted from a ‘continental payout’ system with equal Top Four prizes by zone of £250, plus £150 to the overall winner and section prizes to give more anglers a better chance of making the main frame. £5 from each ticket sale will be handed over to the charity Get Hooked on Fishing.

This year’s winner of the Mike Martin-Davies trophy was Mark Brush with 12lbs 4ozs of quality roach from Chiswick on the maggot feeder followed by Colin Shepherd with 9lbs of bream from Kew and a mixed bag of 8lbs 4ozs for Ali Attwater at Barnes. The final zone winner was Anthony Strudwick with just 3lbs 2ozs from the tough section at the bottom of Kew. The Thames was in dour form with the lack of freshwater making fishing difficult for many.

“This popular event was always going to be a struggle given the drought and the lack of flow which tends to see the coarse fish pushing further upstream and out of the match length. However, the lack of bream gave the big roach a chance to put in an appearance and it’s great to see such quality fish thriving in the heart of London. We are grateful to Will Barnard and the Angling Team at Thames Water for helping to organise the match and for keeping match angling alive in our capital city.” 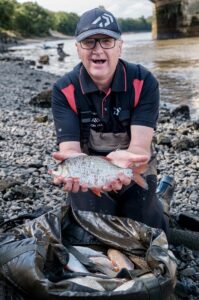 Mark Brush with some impressive roach in his winning catch 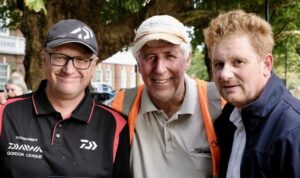 Winner Mark Brush with Martin Salter and Will Barnard 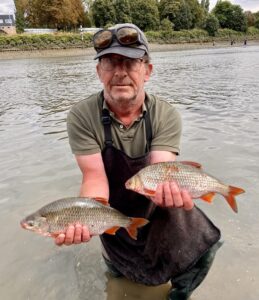