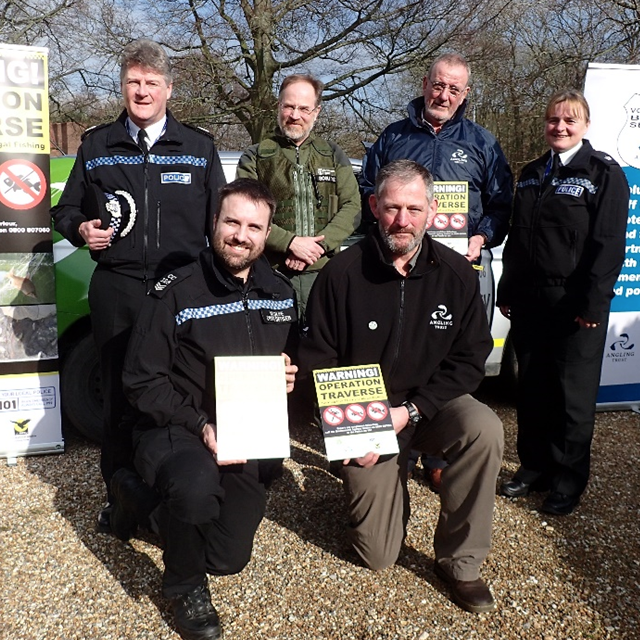 Poaching – fishing without permission – and fish theft, along with anti-social behaviour and other crime at fisheries are of great concern to all anglers.

In 2012, the Angling Trust had the foresight to engage life-long angler and retired West Mercia police officer Dilip Sarkar MBE to lead on coordinating the response to this issue and briefing police forces nationwide. Working closely with the National Police Chiefs’ Council, Crown Prosecution Service and Magistrates’ Association, awareness was increased, and a multi-agency response initiated.

Whilst the police deal with criminal matters, the Environment Agency is the statutory lead agency on fisheries enforcement. Essentially, this largely involves rod licence compliance and fisheries offences. Clearly then, the police and Agency have distinct roles – and must work smarter together.

To encourage this, in November 2014 Operation TRAVERSE, targeting poaching and fish theft, was launched at Lincolnshire Police headquarters, followed in June 2015, by Operation LEVIATHAN, launched at West Mercia Police headquarters. Most forces in the country now subscribe to one or other, ensuring that the Agency receives better support and anglers an improved service.

We must all understand that the system is ‘intelligence-led’, meaning that every incoming call and piece of information is vital. Indeed, the statistics arising are what quantify problems and arguments for more resources.

It is crucial that crimes in progress are reported to the police (police advise using 999 if appropriate), and fisheries offences to the Agency on 0800 80 70 60.