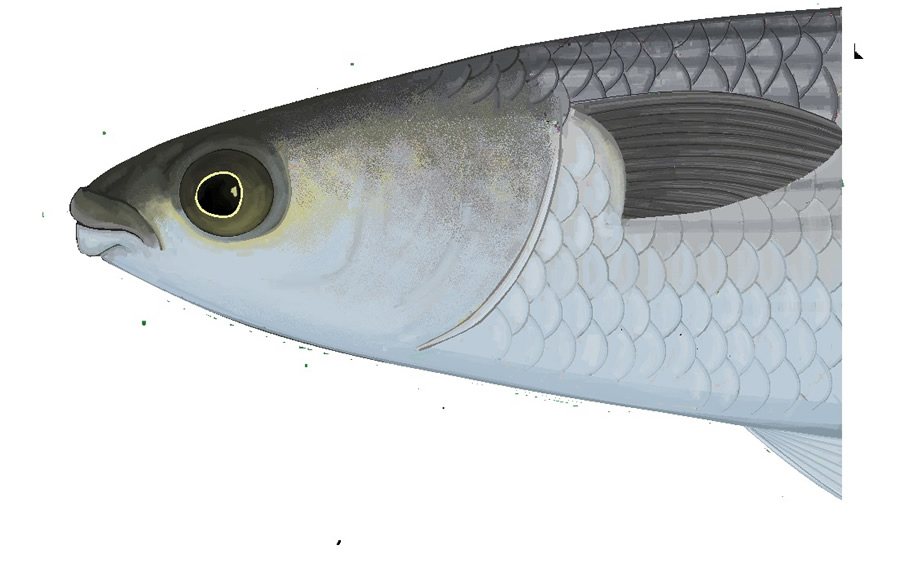 ‘Fishbook’: Our species-guide series based on “Get Fishing”
the brilliant how to fish book by Allan Sefton

We profile the UK’s most common as well as some lesser-known fish species to help newcomer anglers find out more about fish that can be caught in our lakes, canals, rivers, ponds and sea.

Understanding the kinds of fish you might catch will add interest and could even make your fishing easier! Here you’ll find out more about…

Waters:
Common in estuaries and harbours around shores of England and Wales, and now populating southern Scotland

Interesting fact:
Mullet come inshore in large numbers during the summer months and often feed in very shallow water as the tide advances up an estuary or over a sandy beach

Mullet are a distinctive, silver torpedo-shaped fish with dark horizontal stripes. There are three common species of mullet around British shores. They are predominately a southern species although there are big shoals of mullet as far north as the Firth of Clyde.

Mullet come inshore in large numbers during the summer months and often feed in very shallow water as the tide advances up an estuary or over a sandy beach. They feed mostly on algae and very small invertebrates and have relatively small mouths.

Some mullet (mostly thick-lipped grey mullet) make their home in harbours and marinas where they feed around moored boats.

Mullet are difficult because they are mostly vegetarian and feed on algae. They do not take the usual sea baits that predatory fish fall for. If you find something they like, mullet remain careful feeders and are good at avoiding being hooked.

Those anglers who developed their skills catching suspicious, freshwater fish on light tackle, have a definite advantage!

Visit the rest of the How To Fish video gallery here to learn new tricks and discover more about the basics of angling.

Find out more about:

Read more about how you can get into sea fishing. Alternatively, find a venue near you where you can #getfishing!

Some of the above content is taken from the new book, Get Fishing – the ‘how to’ guide to Coarse, Sea and Fly Fishing by Allan Sefton published by Merlin Unwin Books. This colourful, lively book is aimed at complete beginners of all ages, those who have been out fishing a couple of times and want to take it further and families of all abilities. It’s also packed with top-tips and info that make it useful for more experienced anglers too. Find out more about, and purchase a copy of the book here.

Header image thanks to David Overland and text reproduced with permission and © Merlin Unwin Books.


After a delay of nine months, the Environment Agency have today (17th September) released the latest…
Read more
It is with great sadness that we report the death of Jim Glasspool, who played a key role in the cre…
Read more
The Angling Trust is looking for talented coarse anglers who would like to apply for the England und…
Read more
Today [15th September 2020] the UN Global Biodiversity Outlook 5 report was published. It is the thi…
Read more
The Cabinet Office on behalf of the Government have confirmed that despite increased restrictions on…
Read more
Angling, fishery and wildlife interests in the Norfolk Broads campaigning against the serious threat…
Read more
With new Covid-19 guidelines coming into force on Monday limiting gatherings to no more than six peo…
Read more
Funding for angling participation available now A new round of Environment Agency funding will suppo…
Read more
This year’s Thames Tidefest was another great advertisement for London’s river with some excellent a…
Read more
Huge numbers of people find that fishing offers them a very special way of relaxing and increasing t…
Read more
Our Anglers Against Litter campaign provides a voice for anglers wanting to see an end to the harm l…
Read more
FishOMania will return to Hayfield Lakes, Doncaster for the fourth consecutive year on Saturday, Jul…
Read more