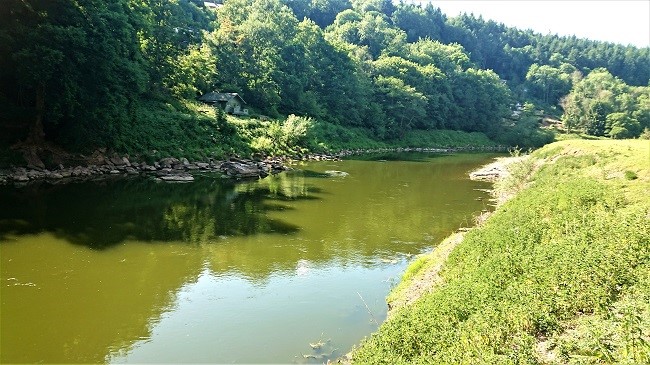 Fish Legal is representing one of its members – the Ross-on-Wye Angling Club – who have held fishing rights on the River Wye since 1912.  In recent years, anglers at the club have witnessed a gradual increase in the frequency and duration of algal blooms on their fishery in parallel with the expansion of the free-range poultry industry in the upper Wye catchment.

Following the notification, under the Environmental Damage (Prevention and Remediation) (Wales) Regulations 2009, Natural Resources Wales must investigate and ensure that the farms in question put in place proposals to prevent further damage from occurring.

An “Appropriate Assessment” should be carried out to determine the harm being caused to the Wye by poultry farming, under the Habitats Directive. As a result, the environmental regulator will need to establish with certainty that the current farming practices are not adversely affecting the integrity of the River Wye Special Area of Conservation.

Paul Unsworth of Ross Angling Club, who has been an angler for over 55 years, said, “Natural Resources Wales appear to have been sleeping on the job. Whilst I can see that individual poultry farms in Powys may be acting responsibly, the regulator has clearly failed to assess the impact that all of these farms are having on the river in combination.

“The Wye’s ecology is of the utmost importance. It supports the whole tourism industry in the Wye Valley and provides recreation for people of all ages. Sadly, Natural Resources Wales has allowed the number of chicken farms in mid-Wales to proliferate to the point where one industry could potentially kill off this precious river and the livelihoods of people who rely on it. Hopefully, this formal notification will force them to do something to protect the river before it is too late.”

The fate of the river was recently highlighted by the Wye and Usk Foundation, who reported algal blooms for the first time ever occurring as high up the catchment as Llanbister in an area with very few other phosphate inputs to the river.

Justin Neal, Solicitor at Fish Legal said, “It is worrying that the regulator responsible for protecting the Wye has stood by without using its powers to prevent damage to the river. This habitat should be pristine. But it has become so polluted that the river is failing to meet its status targets under national and European law. Natural Resources Wales now needs to act to prevent further harm to the Wye in line with its statutory duties.”

Natural Resources Wales has been given two weeks to respond to the formal notification.

Stuart Singleton-White, Head of Campaigns at the Angling Trust, said, “We’ve had enough of regulators not doing enough to protect our rivers.  This is an extreme example.  Unfortunately, is it not a rare occurrence.  Whether it is chicken waste, agricultural runoff, or the tens of thousands of raw sewage incidents from water company sewage overflows, too many people still treat our rivers with contempt.  If Boris Johnson and the government want to “build back better” after the lockdown, they should start with sorting this mess out.”