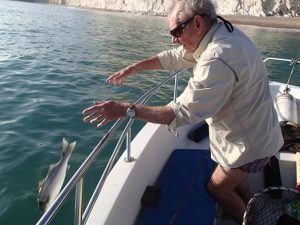 Ian Hockley was born in Hillingdon on 24th August, 1947, and was pretty much a fisherman all his life, starting out on local rivers and canals and progressing to winning the Players No 10 match prize in the 1960s.

His great love was river fishing, particularly in the clear waters of the Berkshire rivers where he developed a love of sight fishing. First it was chub and barbel, later it was a fly for trout and grayling, then further afield for salmon and sea trout and eventually overseas for bone fish, permit and tarpon.

Ian retired from a haulage business he ran with his brother Graham and decided to become more involved with fishing. He was one of the first people to qualify as an instructor by the old STANIC, administered by the Salmon & Trout Association, and he began teaching people to cast and arranged fishing trips for clients.

Tony King, fly-fishing instructor, guide and close friend of Ian, said: “Regular visits to Scotland honed his skills as a salmon fisher and it was on a Scottish border river that we first fished together.

“When I lived in Scotland we formed an alliance and worked together with parties of mixed ability and experience fishing for salmon and sea trout in my local rivers. He went on with the support of Guide fly fishing, Maggie and others to fish in many foreign countries for salmon and saltwater fly species.

“Ian was a member of the Hardy Academy and played an active part in the organisation of fishing and casting instruction at the CLA Game Fair and later still the Game Fair during which time he was a staunch supporter of the casting events which he saved from being dropped entirely.”

Ian acquired the lease for the wonderful little spring feed lake and stream fishery Lochinge near his home in Wantage which he has successfully ran as a syndicate trout fishery and was home to Westlake fly fishing.

He was a member of REFFIS and APGIA. When GAIA was formed he was one of the first members and, serving on its management committee, proved a very able and valued member. He was a relentless pursuer of what he believed in and did all the necessary work to complete the Angling Trust coach qualification as well as GAIA (APGIA) and AAPGAI qualifications.

In recent years Ian developed a passion for warm salt water fly fishing, bone fish and permit in particular, and latterly hosted parties for Gofishingworldwide to Cuba and Mexico.

Tony added: “Always amiable and easily funny he was a good instructor and taught many to fish and many others to be better at catching them. He will be sorely missed by all that were privileged to know him.”

Mark Lloyd, former Chief Executive of the Angling Trust & Fish Legal, added: “I was very sad to hear of Ian Hockley’s death after a long struggle against cancer. Ian gave up a huge amount of his time to help others discover and enjoy fully the delights of fishing. It was a pleasure to work with him developing new initiatives for coaching and he helped foster an excellent working relationship between GAIA and the Angling Trust in recent years through his thoughtfulness, strategic vision and generosity of spirit.”