The Canal and Rivers Trust (CRT) intend to allow a commercial barge to continue to operate through the Knottingley section of the Aire and Calder Navigation in West Yorkshire despite admitting it is killing massive amounts of fish.

In an email to the Angling Trust on 17th December, CRT admitted the barge is responsible for the fish deaths but say they are investigating contributing factors which will not be complete until the end of February.

Meanwhile, CRT have said that “until we know the recommendations, freight operations will continue.”

The Angling Trust wrote to CRT in support of two angling clubs – Mirfield and Walton – who had raised concerns that every time the barge passed through the area it left a trail of dead fish in its wake. Photographs and video footage support their claims with seagulls following the barge to feed off the dead and dying fish.

“I find it unbelievable that CRT are acknowledging the vessels are causing damage and that by continuing to run the vessels it will help them to identify the contributing factors. How many fish do CRT intend to sanction killing in order to reach a conclusion in late February?”

CRT’s investigation is focusing on a combined sewage outfall, which they do not identify in their email to the Angling Trust, and from a “toxic soup” caused by the barge disturbing the silt of the Aire and Calder. According to CRT this could “possibly [be] stunning them and subsequently making them susceptible to propellor strikes.”

The Angling Trust has called for the commercial operation to be halted immediately and should not restart until the investigation is completed.

“The failure of CRT to stop this barge operating is akin to allowing a woodland to be cut down during the nest season by a commercial logging operator. If it were a woodland, there would be a huge amount of public anger, and rightfully so. CRT need to know there is public anger over the killing of so many fish.

“Their relaxed attitude and lack of concern around the devastation this barge is causing is astounding and extremely disappointing. They need to act now, not in late February. Operations should remain suspended until that cause is resolved, and the navigation returned to an ecological condition that can allow the operation to recommence without the killing of fish.”

The Angling Trust is seeking an urgent meeting with CRT to discuss the matter. 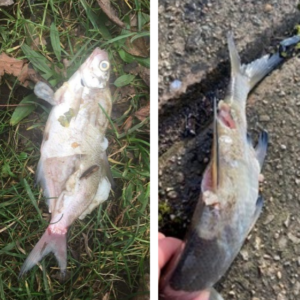