Following double gold for Team England at the first-ever Kayak World Championships last weekend, manager Steve Collett takes us behind the scenes from the big event in Portugal… 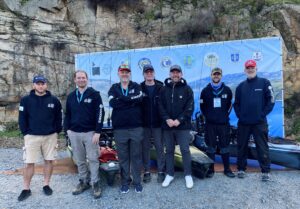 First, the venue – Sabor Lake, near Torre de Moncorvo in Portugal – is unlike anything we’ve seen or fished in the UK.

Depths reach over three hundred feet, and the lake contains a species not found in our waters – black bass – and so with fish completely new to many anglers our preparation for this event was crucial.

We started our approach to the competition by getting up to speed with the species and tactics we’d need to compete at the highest level and that meant the team had to put in the hard miles.

We started by heading out to Lake Bolsena in Italy to compete in a national championship where black bass were the target fish, and we picked up loads of vital information for the World event.

Many of the team had never seen a black bass let alone caught one so it was a case of gleaning knowledge from local guides and a network of tournament bass anglers from all over the world, pooling our findings to create a battle plan.

At the world champs there are catch limits in place and we would be looking for two zander (only counting as half a point per cm) and three bass – a target we felt we could catch and, importantly put a decent score together. Come the event, we were quietly confident of a good finish.

The Angling Trust England team consisted of the finest competition kayak anglers in the country and brought together a huge range of skills from multi species hunters to serial predator title winners.

Mike McGuire, Alan Robson, and Andy Dougan were also part of the successful England boat squad which had just returned from the Czech Republic and joining them were the hugely successful trio of Martin Collison, Mark Radcliffe, and Sean Milner.

I must admit that, as manager, I’m incredibly lucky to have such top-quality anglers with a multi sector skill set, guys who are just at home on the Severn as they are fishing in the sea.

But more importantly they all have a strong team ethos which is essential when going into a new world championship.

Day 1 – a flying start We couldn’t have asked for a better start! Flying off the blocks it was clear to see that our strategy of targeting early Zander was crucial, especially as we’d worked out that they stopped feeding at 12.00pm each day! 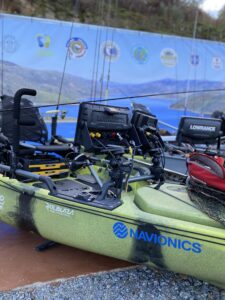 Kayaks kitted out for success

That strong start on day one gave us a massive boost, but we didn’t know where we really were in the ever-changing table due to an admin error at FIPSed – a nightmare for any manager as the tactics could change at any time and places can easily slip away from you.

Fortunately, Mike McGuire’s full card and a superb set of back up catches from the rest of the team put us in first place going into the final day with home nation Portugal and big rivals Italy taking up the silver and bronze medal positions overnight.

The final day proved to be much tougher for most competitors with overnight temperatures dropping well below zero and a freezing fog during the start of the competition meant bank running became almost impossible as visibility dropped below five metres.

I was filmed by another team pacing up and down like a caged animal, my instructions were being hampered by bad signal coverage and I couldn’t see the guys with my binoculars – it was the most stressful few hours of my life!

Slowly though information came through that the Italians were catching well but I had worked out that they could not catch us mathematically and a medal was almost guaranteed. 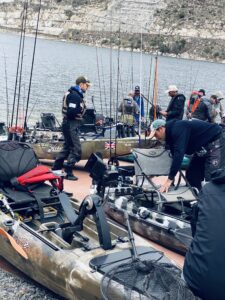 But I craved the gold and pushed the guys to the very limit both physically and mentally.

As word filtered through that Mike had caught two bass, he moved near the finish line to maximise his last 10 minutes of the match and caught a zander right in front of the crowd with only seconds to spare.

We reckoned that this fish, backed by the rest of the teams’ catches were enough to secure gold, but I didn’t want to celebrate anything until the FIPSed website had it down in black and white.

And then there it was – England were world Champions! Scoring a huge 668.5-point total we’d secured out first-ever gold in the lure fishing disciplines.

It kept getting better

When the result did come through, I admit, I became overwhelmed with emotion. Those who know me know how much I have put into this Team England lure fishing programme, the tantrums, the tears, and the sheer emotion became too much. We are World Champions, I had to keep saying it, almost in disbelief. 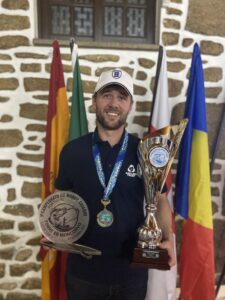 The next few hours were a blur to be honest. I had hundreds of phone calls from all over the world offering congratulations.

Mike’s individual gold and Sean Milner’s fourth place finish were the icing on the best cake – what a team, and what a performance.

I can still feel the goosebumps when that national anthem played, and we were standing on top of the podium. We had in our midst an individual World Champion and gold medals as a team – it doesn’t get any better than that. 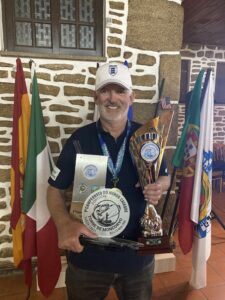 Team England Lure fishing is in a great place. The Street Fishing team narrowly missed out on a medal due to a admin error at the event and the boat squad putting in a highest place finish has made this a superb year that we should all be very proud of.

The level of financial and personal commitment these guys have put in has been truly phenomenal and I feel privileged to work with such a great set of people.

Hopefully, this result, combined with the performances of Street and Boat squads, will be the platform we need to push lure fishing forward and to move up the international ranking table – watch this space!