A Cheshire angling club has launched a local campaign to clean up the River Bollin following Water Quality Monitoring Network (WQMN) tests they carried out as part of the Angling Trust’s Anglers Against Pollution initiative.

The tests conducted by members of Mottram St. Andrew Fly Fishing Club, founded and chaired by Grayling Society Conservation Officer Ron Taylor, provided evidence that there was heavy pollution of the Bollin.

United Utilities’ Prestbury Water Treatment Plant is immediately above the club’s stretch of the river and has regularly been seen discharging raw sewage through storm overflows. The company admitted there had been 114 spillages in 2021 and 34 so far this year up to 13 September.

The stretch of water was home to a good head of trout and chub, but the club says few are now caught and algal growth can clearly be seen along the bed of the river.

The club involved the Parish Council and enlisted the support of Macclesfield MP David Rutley who helped arrange a tour of the treatment plant to try to understand why discharges were being allowed to continue.

David Rutley also visited the site himself and both visits highlighted decisions made by United Utilities which were restricting improvement of the situation. The club has now written to the United Utilities CEO requesting a meeting to discuss improvements where inadequacies had been exposed. This will take place in mid-November.

An article advising the public of the high levels of phosphate and nitrate in the Bollin has also been published by the local newspaper warning people to stay out of the water.

“The Water Quality Monitoring Network and the results produced have been the catalyst for improvement, providing evidence to rely upon. The Angling Trust, assisted by the Grayling Society, has provided the opportunity for all angling clubs in England and Wales to become involved in testing their own waters and pursuing their own campaigns based on the results.”

The WQMN was launched in May as part of the Angling Trust’s Anglers Against Pollution campaign to engage angling clubs in better understanding pollution issues on their waters. Test findings will help the Angling Trust hold the government to account, ensuring it lives up to its rhetoric on improving our environment and meeting its own legal responsibilities, and support local initiatives to improve our rivers.

“The response to the Water Quality Monitoring Network project has been fantastic from clubs all over the country. The initial pilot project on the River Severn was rolled out nationally in July and we already have over 200 volunteers from 87 clubs signed up with the Trust to take and test regular water quality samples using equipment supplied through the scheme.”

The initiative is supported financially by Orvis UK and APTUS tackle and the “Big Yellow Boxes” are supplied by Flambeau Outdoors. If your club would like to get involved, please contact [email protected] 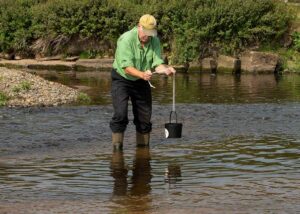