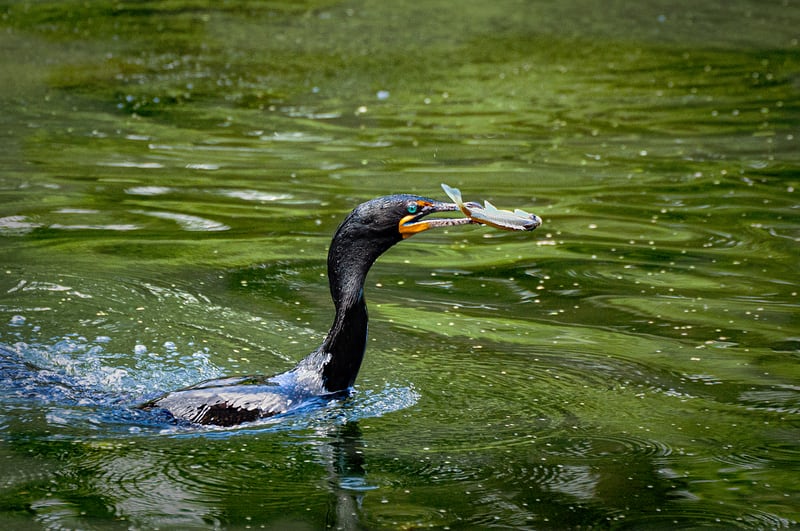 From campaigning for fish-eating birds like the cormorant and the goosander to be added to the general licence, to advising on otter predation preventative measures, the Angling Trust is lobbying Westminster to take action to protect our precious freshwater fish.

Since the inception of the Angling Trust in 2009 we have been campaigning for stronger management and enforcement of fish-eating birds that threaten the populations of our vulnerable freshwater fish species here in the UK.

The cormorant is an apex predator, unmatched in nature, and is unquestionably one of the biggest threats to the health of our inland fish populations, with there being hardly a country in the world that accepts it as an acceptable coexistent without robust management.

Cormorant numbers in the UK have increased from 2,000 in the 1980s to a current over-wintering population of more than 62,000, and with each bird requiring at least one pound of fish every day, the level of conflict is immense.

This burgeoning population, now over-wintering here in the UK, is mainly made up of the European sub-species Phalacrocorax carbosinensis, which prefer living and hunting inland in the freshwater of our rivers, streams and lakes.

Since its conception in 2009, the Angling Trust has been campaigning to make it easier for fishery managers to protect their precious fish stocks from cormorant predation and for greater control of these extremely damaging fish-eating predators. We continue to believe that the best outcome would be for cormorants to be included on the general licence as long as the conservation status of the birds is not threatened. However, we have not been able to persuade ministers to adopt this approach which is why we are pressing for the best possible outcomes within the licensing framework.
Pressure from angling organisations and angling-related businesses initially saw a previous government introduce a limit on the number of cormorants licensed to be shot of 2,000, with a temporary increase to 3,000. Since then, the work of the Angling Trust since then has led to fishery managers applying for a far greater number of cormorant licences.
In 2012 we launched Cormorant Watch – a data-gathering website where anglers could log sightings of cormorants, in addition to goosanders and red-breasted mergansers – other highly damaging fish-eating birds. Thousands of anglers took part and registered over 120,000 sightings, which gave us a much better understanding of the abundance and distribution of cormorants in England.
The Angling Trust used the information generated from Cormorant Watch to convince the government to change the way cormorant licences work in England. This reform saw the introduction of the Area-Based Licence system, which have reduced bureaucracy and costs for hard-pressed fishery managers and angling clubs. Furthermore, our campaign resulted in the government funding two full-time Fishery Management Advisors to be employed by the Angling Trust to help fisheries and clubs nationally with licence applications and with non-lethal control of predators. The introduction of Area-Based Licences has been welcomed by those participating in these schemes.

Thank you to everyone who reported sightings of cormorants and goosanders for our second Cormorant Watch initiative, which has now closed. This has provided us with useful information about the distribution of birds over past winters and we’ll continue to use this information to press for more improvements in the management of fish eating birds in England and Wales. At one point, Cormorant Watch attracted the attention of wildlife groups and a few animal rights extremists, some of who suggested that it should be anglers, rather than cormorants, who should be shot! The issue flared up on Twitter, demonstrating the sensitive nature of discussions around predation and fisheries. We have to tread a very careful line.

The Angling Trust has campaigned very vigorously over many years to improve the protection of vulnerable fish stocks from predation by cormorants and goosanders. In that time, we have had some success, securing funding for two fisheries management advisors (FMAs), who have been employed by the Angling Trust since April 2014 to help angling clubs and fishery owners reduce predation, to co-ordinate applications for the new area-based cormorant licences we secured and to gather better evidence about the number of birds in each catchment. For the past few years, the number of cormorants shot has risen from below 2,000 per year to around 3,000, but Natural England has made it very difficult for fishery managers to control goosander numbers.

We continue to fight for an increase in the national limit on the number of cormorants that can be shot each year and a reduction in the evidence requirements to control goosanders which often results in applications being flatly refused. We have raised the issue repeatedly in letters and meetings with the Environment and Fisheries Minister, the Chief Executive of Natural England and the Cabinet Secretary in Welsh Assembly Government.

We have taken the head of the Defra Wildlife Management team on a site visit to the River Exe, where salmon stocks are being depleted by cormorants and goosanders eating smolts as they try and navigate the many weirs on the river. We have presented scientific evidence, gathered by the Atlantic Salmon Trust, that shows between 40-60% of salmon smolts are lost to predation as they make their journey down river to the sea. We also represented anglers at a meeting with Natural Resources Wales where we discussed how greater controls might be introduced to protect declining stocks of Welsh fish.

Our position remains that cormorants are now so common that they should be added to the general shooting licence (along with pigeons, crows, magpies etc.), subject to an annual review to ensure the conservation status of the birds is not threatened. We’re currently working with Natural England and the Environment Agency to try and carry out some pilot projects in three river catchments to see what impact this would have.

Most of the cormorants we see in this country fly over the North Sea from the Baltic region, where numbers have increased dramatically in recent years. As the Baltic region becomes colder after the summer they migrate southwards. If there is a cold winter in mainland Europe, we experience a significant influx of birds in the UK. As a member of the European Anglers’ Alliance, the Angling Trust is working with angling organisations in these countries on a Baltic cormorant management plan to monitor the impact of the birds and to manage their numbers at sustainable levels.

Feedback suggests that this is one of the most important issues that nearly all of our members want us to get the authorities to resolve. We are aware that not all of our members feel the same way, and a small minority feel that we should concentrate instead on campaigning and legal action to tackle pollution, water levels and habitat damage. Our ultimate objective is of course to address all of the environmental threats to our fisheries, and we have won many battles in recent years at a local and national level. However, there is a long way to go, and we believe that in our heavily-modified natural environment there is a very good case for managing predation by fish eating birds at sustainable levels, so we will keep fighting for sensible, proportionate action to protect fish populations, many of which are under severe threat.

As otter numbers have successfully recovered across most parts of the country they are at times having an impact on some fisheries through predation of stock.

In the last few decades while otter numbers were low, still water fisheries stocked with large carp became widespread throughout the country and specimen sized fish became a real prospect in our rivers due to improved water quality, habitat and little predation.

Now otters have returned to most areas, they are presented with foraging opportunities that sometimes comes into conflict with angling interests, with numerous examples of expensive or highly prized specimen fish being taken by otters.

The Angling Trust and the Avon Roach Project have campaigned jointly for more than seven years to have the cormorant placed on the ‘General Licence’ enabling the legal right to better protect our vulnerable inland fish populations.

We have pushed for a review of the current woefully inadequate, restrictive and inflexible licensing regime, and last year, finally, we had the opportunity to achieve the changes we seek and to better protect our fisheries. The Wild Birds General Licence Survey ran until December 5th 2019 and we thank all of those who participated in the survey.

The cormorant is an apex predator, unmatched in nature, and is unquestionably one of the biggest threats to the health of our inland fish populations, with there being hardly a country in the world that accepts it as an acceptable ecological coexistent without robust management.

Cormorant numbers in the UK have increased from 2,000 in the 1980’s to a current over-wintering population of more than 62,000, and with each bird requiring at least one pound of fish every day, the level of conflict is immense.

This burgeoning population, now over-wintering here in the UK, is mainly made up of the European sub-species Phalacrocorax Carbo-sinensis, which prefer living and hunting inland in the fresh water of our rivers, streams and lakes.

86% of all rivers here in the UK are failing good ecological status according to the Water Framework Directive, which is partly assessed on general fish assemblage. The cormorant is widely recognised, even by the Government’s own Moran Committee as causing an unsustainably high level of ecological conflict.

We are the current custodians and have a duty to leave our environment and our fisheries in as good, if not better, ecological state than when we inherited them.

Comprehensive overviews of the impact of cormorants on our fisheries have been produced in two reports from the Angling Trust and the Avon Roach Project and we strongly urge you to take the time to read them – you can find links to these in the ‘useful information’ section below.

Thank you to all anglers and angling clubs which took part in this survey.

We have received a response to the General License Review. You can view this news story here.

Once again, government ministers have failed to approve proposals that would help control cormorant…
Read more