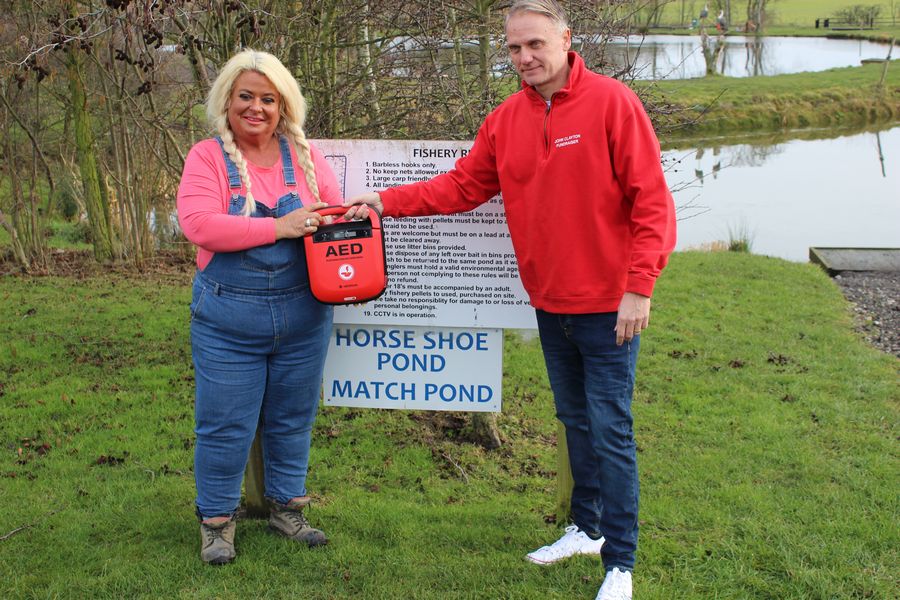 Joanne and Stuart told me about how last summer the site’s CCTV captured a commotion during which an angler fell face down in the water and other anglers went to his aid. They quickly called an ambulance, rushed to the scene and, using their first aid training, started resuscitation.

Despite a delay while the ambulance found the fishery, the angler survived due to the fast actions of all involved.

On hearing this I realised I might be able to help the fishery. An angling friend Peter Clayton’s brother died in a football charity match due to Sudden Cardiac Arrest. Peter’s brother John was a workmate of mine. A very quiet and friendly family man, unfortunately taken far too soon.

Peter now assists the Charity ‘North East Hearts with Goals’ with fundraising to place defibrillators (defibs) in as many local places as possible – town centres, parks and so on.

I spoke to Peter to see if we could help Joanne and Stuart’s fishery. Peter and the charity were fantastic and with the support of North East Hearts with Goals we delivered a defib to the fishery in February.

I hope other fishery owners, venues and anglers get to read about this and can apply for funding or even raise their own funds to install a defib. Maybe you could forward this article to your local club or fishery and ask them to contact me for help, using my details below?

Fishing venues are often the same places that get used by other people who love being outdoors – think dog walkers, runners, boaters and so on. So perhaps any anglers reading this could connect with these kinds of groups, combine forces and help everyone benefit by having one of these life saving pieces of equipment near to where they work, rest or play…