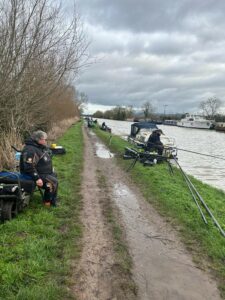 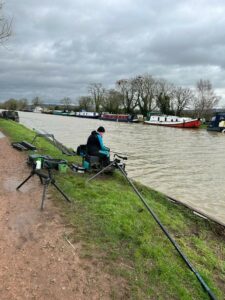 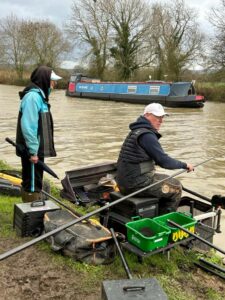 Angling Trust Team England Masters manager Joe Roberts has selected what he describes as one of the strongest line-ups ever for this year’s World Masters Championships in France.

Following an assessment day for the 55 to 65 age category on the Gloucester Canal last weekend, Joe has picked seasoned internationals Sam Wildsmith, Billy Reynolds, Graham Smith, and Matt Hall, with the addition of new England cap Ben Bray making the five-man squad for the big event in late May.

“Conditions were pretty miserable on the day,” admitted Joe, who will be assisted on the bank in France by Mark Harper and Mick Denton.

“We expected small fish to be the target, but the canal was tanking through and flooded so the anglers had to adapt and I was impressed by what I saw.

“The squad is one of the strongest we’ve ever fielded, and new angler Ben Bray fished brilliantly to earn his place.”

Joining them at the teams-of-four event will be the Team England Veterans squad – for anglers over 65 – and manager Dickie Carr has largely stuck with the team which won double gold in 2021 and bronze last summer.

Mark Downes, Steve Sanders, Harry Billing, and Roger Marlow all return to earn England caps, but there’s a move for one of last year’s Masters anglers into the Veterans line up.

Former World Champ Tommy Pickering, who fished with both the Masters Float and Feeder teams in 2022 and won individual silver at the Feeder event in September, has moved up to the Veterans squad.

Both squads will be tackling a notoriously tough canalised section of the River Moselle, near Toul, eastern France, in early June 2023 where pole and float fishing for lots of small fish like roach, gobies, and skimmers and skills with the pole, worm, and joker will be the main approaches.

“We’ve fished the venue before in August and the fishing was centred around gobies on a short whip,” added Joe. “In May it’s likely to be a different match with small roach and skimmers on the long pole. Whatever we end up facing I’m sure we have the anglers to cope and bring home a medal.”