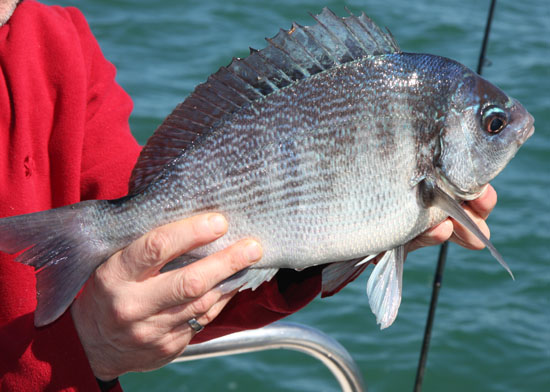 The Sussex IFCA has introduced a new Marine Protected Area byelaw. Schedule 1 of the byelaw contains details of management measures for activities taking place within the Kingmere Marine Conservation Zone.

For sea anglers this means new measures on where they can fish, when they can fish there and how many black bream they may retain per day.

The Kingmere was designated as a Marine Conservation Zone to protect the seabed features which make this the single most important known nesting site for black bream around the coast of the UK.

In order to protect the adult nesting and aggregating population of black bream using the site management measures have been introduced to limit the impact on the species while allowing important social and economic activities to take place – such as recreational fishing.

Anglers are now limited to retaining four bream per angler per day when fishing within the MCZ. One of the areas within the MCZ is also closed to recreational angling during the spawning season from April 1st – June 30th. Measures restricting trawling, netting, lining and potting are also in place throughout the MCZ.

The measures agreed are the result of lengthy discussion and consultation between the Sussex IFCA, the Angling Trust, local anglers, wildlife organisations, other stakeholders and Natural England.

Representatives of the Angling Trust’s Sussex Marine Region put in an enormous amount of work to ensure that as many anglers as possible were aware of the process and able to contribute to the discussions taking place on the management measures needed to achieve the conservation objectives of the MCZ. They also highlighted the huge value to the local economy of the many charter boats who rely on taking anglers fishing on the Kingmere reef.

Sussex anglers were consulted and many public meetings were held at fishing clubs and other venues along the coast. The compromise agreement reached leaves recreational angling in a very strong position to ensure that anglers and charter boats can continue accessing the Kingmere reef and fishing for black beam throughout the year.

The Angling Trust’s Head of Marine, David Mitchell, said: “Many organisations would have liked to have seen angling banned altogether in the Kingmere MCZ in order to protect the nesting black bream. The Angling Trust has worked incredibly hard to ensure the best possible deal for anglers and charter boat businesses.

“Anglers will have access to all but one section of the MCZ throughout the year and will now have to comply with a four-bream-per-day bag limit. Alongside restrictions on trawling, netting and lining, recreational anglers are playing their part in conserving and securing access to this hugely valuable recreational fishery.”

A voluntary code of conduct is also in place for recreational fishing.