Ticket sales will be open around March 2022. Please check back for updated information.

The Individual National Championship is for all individual members of the Angling Trust over the age of 16 on the day of event.

This is an individual event scored by overall weight, the winner will become the Individual National Champion.

Pegs are limited and are served on a first come first served basis.

Entry fee: £30.00 (All in)
Headquarters: tbc
Draw: tbc
Anglers to go straight to pegs on the morning of the match.
Fishing: 11:00am – 4:00pm (Duration of 5 hours)
Closure of waters for practice: tbc
Licences: All competitors must be in possession of a current Environment Agency Rod Licence. Any competitor reported by the Environment Agency to the resulting team on the day of the match will be disqualified.
Keepnet: Minimum length of 2 metres
Rules / Bait bans: No bloodworm & joker. Further local rules tbc closer to the time.
Refreshments: tbc
Eligible fish: All fish caught are eligible for weighing with the exception of Game fish, Pike, Zander & Crustaceans.
Procedures: All weighing in and recording will be carried out by Senior Stewards who will be supplied by the organising club.

Despite the venue being in dour form of late we still had the biggest turnout for an Individual National we have seen for many a year.  Heavy downpours in the days preceding the match did nothing to improve the sport and most competitors struggled for just a few bites with 49 competitors not bothering the scalesmen.  Despite that, there were some respectable weights recorded by those that were lucky enough to find themselves on feeding fish with 2Kg plus required to finish in the top 40.  Paul Abbott was over the moon to be drawn peg 145 on the mouth of Yardley Marina and he made no mistake in winning this prestigious contest and take the accolade of Individual National Champion 2021 and the gold medal with 12.770Kg of bream taken on ground bait feeder tactics.

Another fancied peg, peg 1 at Stoke Bruerne was drawn by Terry Molloy and after a bumpy start losing 5 good skimmers on the trot he managed to keep the rest on the hook and ended up as runner up and a silver medal with 9.610Kg of skimmers.  Graham Smith was drawn at peg 188 at Drift Farm which had a bit of form and despite falling behind in the early stages to the pegs below him he clawed it back to finish in the bronze medal position with 7.680Kg of skimmers. 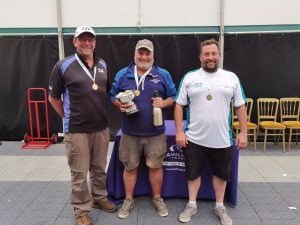 Full results can be found posted on the Angling Trusts Competitions Facebook page.

The canal is now closed to practice so 2 weeks’ rest should now give us a better Division 1 National to look forward to.

The Angling Trust would like to thank Chris Howard and his team for organising the day and Northampton Nene AC for use of their waters.