There are no heats or regional eliminators, just a simple two day competition with a fantastic prize fund up for grabs.

The competition is open to all clubs and match groups from the UK, Ireland and further afield but places are limited to a maximum 18 teams. These will be allocated on a first come first served basis when entries open in 2021. Angling Trust member clubs will benefit from priority access to tickets and a reduced entry fee.

The competition is fished to International Rules scored on a full catch, measure and release basis and the match will be regulated by boat stewards.

Entry fees for member and non member clubs are all inclusive and will cover fishing permits, boat hire for two days and administrative costs. Individual membership is not a requirement to compete. Details on the costs for the 2021 competition will be announced soon.

Angling Trust Club/Match Group membership starts at £60 and clubs can join at www.anglingtrust.net/membership

Entries for this competition will open in 2021 and are through the Angling Trust Booking system only at https://anglingtrust.net/our-competitions/

You can download a PDF of the rules and FAQs at the bottom of this page.

Six anglers will form a team, each team will be split into two sub teams of three anglers.

A briefing will be held at Draycote Lodge on day one and a presentation held at the fishery at the end of day two.

The match will be fished to international rules and on a full catch, measure and release basis. Boats must return to the jetty in time for the end of each session where score cards will be submitted to organisers. The combined team length in cm over two days will determine the overall result and winning team.

Boats for practice must be paid for direct with the fishery and are not included in the competition entry fees.

Competitive fly fishing has been crying out for a prize fund that can be compared to those in other disciplines of the sport. The Loch Style Team Championship will do just that and with no heats and no regional qualifiers, teams head straight to the big money match!

The total prize fund is expected to be a whopping £5,500*. The biggest cash pay-out in competitive team fly fishing in the UK.

*minimum 15 teams required to run the event and maximum of 18 teams, prize fund subject to entry

NOTE: The format and rules for this competition may change in 2021 due to Coronavirus. Updates will follow in due course.

The weekend of the 15th/16th June 2019 brought the second Angling Trust Loch Style Team Championships held this year at Draycote Water. Sixteen teams were to battle it out for their share of the £6,000 prize fund with the 2018 champions Fulling Mill FNF Nymphomaniacs returning to try and retain their title. There were several new teams this year with Team Costa entering three teams and the England Ladies, after their gold medal success at Draycote in the Ladies Home International a week previous, also putting a team in for the first time.

The format of the competition was the same as in the first year, with three, three-hour fishing sessions split by a 30-minute break allowing score cards to be handed in and for teams to regroup and share tactics and flies for the following sessions. Out of each six-angler team two anglers would control in another team’s boat whilst the other four anglers would fish in pairs. The match was fished to full catch and release with fish measured and recorded by the boat controllers. The winning team would be the team that had the overall greater length of fish over the two fishing days.

Many teams practised in the run-up to the competition weekend and found fish in Toft Shallows, Dunn’s Bay, A buoy, J Buoy and out in open water. As always anglers found a mix of methods worked during practice with Di5 lines and a FAB and Booby combo, to Buzzers under the bung, tip lines with FAB’s/Booby and nymphs and even dries.

Session one on match day started at 9am and there was a three-way split with the boats. Some of the field headed to A buoy/Rainbow Corner, some made their way to Toft whilst the others headed to D Buoy. It soon became clear that the fish off A Buoy had switched off and Dunn’s, the open water and Toft were the places to be. At the end of session one Elinor and Draycote Rio Masters were out in front with 16 fish.

Session two again saw a three-way spilt with the open water, Toft and Dunn’s seeing the most action. Toft in particular had switched on and the Flash Attack Reservoir Dogs made the most of this with 14 fish coming to their boats. The final session brought mixed results with some teams struggling whilst others put fish in the boats with both the Reservoir Dogs and Pitsford Pirates catching 17 fish.  At the end of day one things were close at the top with everything to play for on day two. 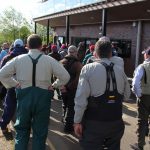 Briefing on day one at the lodge. 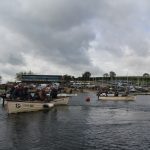 Preparing for the off on day one. 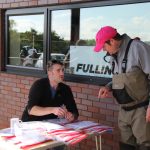 Session one of day two saw boats head to Toft and the open water- it was here that the Draycote Rio Masters found fish willing to feed and they brought 18 fish to their boats for measuring. During the second and third session the fish had wised up and the fishing became more difficult and these last sessions were taken by Fulling Mill FNF Nymphomaniacs who had found bigger fish up by the tower. It was clear that it was going to be very close at the top by the time the boats were tied up.

With no weigh-in the results were soon announced and the Fulling Mill FNF Nymphomaniacs had done enough to retain their title catching 70 fish for a total length of 3211. An outstanding achievement. The Nympho’s tactic to target the bigger fish at the tower on day two paid off. 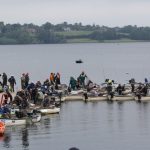 Tackling up for day two. 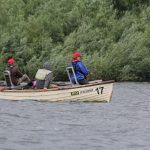 England Ladies entered a team for the first time in 2019. 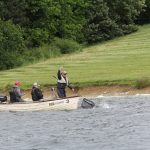 Paul Haskey of Team Elinor nets a fish early on. 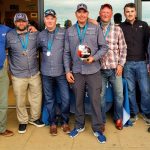 Kieron Jenkins Captain of the Fulling Mill FNF Nymphomaniacs said “We arrived at Draycote Water two days prior to the second Angling Trust Loch Style Championship in hope to search out the best areas, methods and flies. The first practice day was on fire, fish were all over the lake bulging to daphnia, sipping green midge and sporadically hitting shoals of pin fry. All of the team caught good numbers of fish using Blobs and Boobies on Di3’s to nymphs and buzzers on a floater. Practice day two saw things slightly change, the weather slightly turned with heavy downpours of rain and spells of total flat calm. Our catch rate on the sinkers dropped dramatically and the floaters/tips stood out massively.

We took a chance and sent all the team out on the same method; Airflo 6ft Slow Tip, two FAB’s and two nymphs strung up on 7lb Fulling Mill Masterclass Fluorocarbon. After the first day of competition we were around seven fish behind the leaders, Reservoir Dogs – a great place to be heading into day two with no reason to change our tactics.

Again, the weather played its part and halfway through the day the wind picked up making things slightly more difficult. I dropped from a 6ft Slow Tip to the 6ft Fast Tip, hoping to get my flies to bed-in to the wave, allowing me to fish the same depth and speed as the previous day. Fortunately, the change paid off, and we’d managed to win the second session. Back at the jetty we had an in-depth team talk and decided to go for broke, sending our two boats to the corner of the dam where we’d caught a good number of fish, all setting out on the 6ft Fast Tip. The last session saw us land 15 fish between the two boats, three more than any other team, giving us another session win.

We knew it was a close match with a handful of other teams doing well throughout, and the word on the bank was that we’d caught the same number of trout as The Pitsford Pirates, and a couple more than day one leaders the Reservoir Dogs. The wait for the results was intense with great banter between the teams. The results were read from tenth place and we were delighted to hear that Pitsford Pirates were called third and Reservoir Dogs second, putting us in first, winning the £3,000 prize and the Angling Trust Loch Style Championships for the second time running!”

Craig Barr from the Flash Attack Reservoir Dogs said “The Angling Trust six-angler team event is awesome. The format, three, three-hour sessions a day in which four of your six anglers are fishing at any one time is exciting. It brings excitement, teamwork, focus, and fun. You get chance to regroup as a team, and if necessary, change your plan of attack. This competition gives a buzz like no other.”

Charlie Abrahams Captain of the Pitsford Pirates said “We found this a terrific event with the innovative format placing a large emphasis on teamwork. The time off the water was as important as the time on the water. We honed a method based on fishing buzzers close to the north shore. By sharing flies and experience we managed to perform very consistently even in the middle of the day and during the windy conditions. It was an extremely close finish with it all to play for in the final session. Congratulations to the Nymphos and Dogs!”

Andy Taylor Angling Trust Competition Support Officer said “I’ve had the pleasure of fishing this competition over the last two years and it really is a ‘team’ event with plenty of banter between the teams. We have moved from 11 teams in the first year to 16 this year and we now plan to offer 20 team places for this competition in 2020. We have booked Draycote Water again for 2020 and have provisionally booked the weekend of June 13/14th. A BIG thank you must go to the anglers who took part this year, to Ifor Jones, Tom Bird and the staff at Draycote Water for hosting the event and to Ben Thompson and his team at the Angling Trust for all the background work in running this great team competition.”