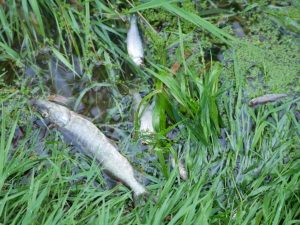 The Maple Lodge Sewage Treatment Works (STW) is located west of London in the Colne Valley. The storm discharge from this STW enters the Mill End loop of the River Colne/ Grand Union Canal which is separate to the main channel, but joins it further downstream. The Mill End loop also diverts over a spill weir into another river channel that runs parallel to the canal, through several angling sites and joins up further downstream.

Date of the incident:

On the days leading up to the incident there had been a number of pollution events and some non-pollution induced dissolved oxygen crashes in still waters in the region meaning the EA Fisheries officer was stretched having to respond to multiple cases.

What was found: Storm discharge which mainly went into the spill weir. The river downstream was an awful grey colour and stank of sewage. Significant numbers of dead and distressed fish were evident for an estimated mile downstream of the discharge point. It could have been further but as the incident was reported in the evening the failing light prevented the full extent of the event to be established.

14th Aug 2020: CVFC were informed that an EA Environmental Team were attending, and Thames Water had been informed through the National Incident Reporting System (NIRS) system. CFVC didn’t see anyone attend to inspect or take samples of the pollution incident. CVFC emailed the EA and Thames Water asking for their incident reports. The generic 20-days to respond email was received from the EA.

21st Aug 2020 (one week after incident): Thames Water sent over their response, which stated they had listed the incident as a ‘no pollution’ incident.

10th Sept (20 days after incident): After no response from the EA within their 20-day response window, CFVC sent a follow up email to the EA. Following this, CVFC received an email which contained a page outlining what they couldn’t tell CVFC (none of this information had been requested) and a report for a completely different incident in May 2020 which the EA fisheries officer and CVFC were not aware of.

CVFC are still awaiting the report for the event on the 14 August 2020.