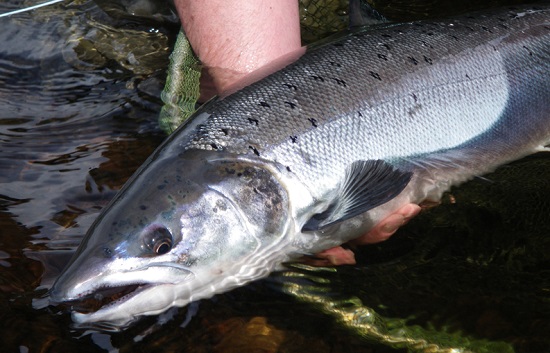 The Atlantic salmon (Salmo salar) is an enigmatic species and the basis for a huge recreational angling sector in Britain. It is an anadromous, migratory fish and therefore undertakes the majority of its growth phase in the marine environment but requires access to clear, fast-flowing, gravel-substrate areas in the headwaters of rivers in order to successfully spawn.
Click here to find out more about the Atlantic salmon’s lifecycle

What is the issue?

The 2014 assessment of Atlantic salmon stocks showed a further decline on previous surveys to the lowest catches on record, and therefore action must be taken immediately if we are to halt the demise of this iconic part of our natural heritage. It was recently estimated that a “severe decline” in salmon stocks would equate to an overall societal economic loss of £350 million annually in England and Wales alone.
Click here to read full report by EA on Economic evaluation of Inland Fisheries 2009.
The Angling Trust was voted to lead the ‘Save Our Salmon’ campaign by readers of Trout and Salmon magazine, and therefore in the years ahead we intend to commit a great deal of time and resources into reversing Atlantic salmon decline.

What are we doing and how will your donations be spent?

The Angling Trust intends to focus our approach to halt the decline in Atlantic salmon stocks into three broad areas:

The Angling Trust believes that it is now time to bring an end to all commercial fishing of both salmon and sea trout throughout the United Kingdom. Individual fish represent much greater value to the economy as a recreational sport fish than as a commercially exploited resource in an industry that supports relatively few jobs and causes massive fish mortality. Importantly, the UK’s lack of action on netting for Atlantic salmon has been used to justify increases in salmon landings through coastal netting by Greenland and other nations. Therefore, it is of paramount importance that we act now to conserve the species throughout its distribution range.
Please see below under ‘progress’ to find out how we’ve driven change.

The second key issue to address if we are to halt Atlantic salmon decline is restoring good water quality and sufficient flows in our rivers. Decades of agricultural intensification in both arable and pastoral farming has resulted in poor land management and consequently a variety of substances feeding into aquatic systems. Huge increases in maize production and poor land management have led to vast quantities of soil and sediments entering our streams and rivers, which can smother key gravel spawning sites, irritate salmon gills, and carry a range of nutrients (slurry and organic fertilisers) and pollutants (pesticides) into aquatic ecosystems. It is very likely that a factor contributing to low marine survival rates (and therefore a link between the two key factors to address) is the sub-lethal impacts of pollutants on salmon smolts, which may reduce their ability to transition from the freshwater to the marine environment.

The Angling Trust aims to increase awareness of the severity of agricultural pollution in the UK and intends to launch a campaign for the government to make the £2 billion subsidy paid to farmers work much harder to protect the water environment. The Angling Trust and Fish Legal will also investigate the case for a Judicial Review of implementation of the Water Framework Directive, as they successfully did with the WWF UK in 2010. Fish Legal will also seek to secure adequate compensation for members who’s fishing may be impacted by agricultural pollution.
More information can be found under Agricultural Pollution.

Predation by Cormorants and Goosanders

The Angling Trust wants to make it simpler and easier for fisheries to obtain licenses and protect their fish stocks from highly damaging predation by piscivorous birds, principally cormorants and goosanders. In 2013 we ran a successful campaign to do exactly this and forced a change in government policy by commencing a pilot programme using area-based licensing together with the employment of two staff to advise fisheries. These Fishery Management Advisors were funded by the EA and DEFRA, and the Angling Trust will campaign for the pilot project to continue, while pushing for more licenses to be issues and for a similar programme to be implemented in Wales and Scotland.

The Angling Trust’s successful bid to front Trout & Salmon’s Save Our Salmon campaign in 2015 led to the government organising a ‘Salmon Summit’ in November of that year. Defra issued a very unhelpful press release during the summit threatening to impose mandatory catch and release on anglers. More positively, the Environment Agency announced a Five Point Approach to addressing the issues facing salmon, pledging to improve marine survival; reduce exploitation by nets and rods; remove barriers to migration/enhance habitat; improve water quality; and safeguard sufficient flows.

The Angling Trust has been leading on the work to reduce exploitation by nets and rods in England. Our aim has been to reduce unsustainable netting and to get rid of all mixed stock exploitation (which catches fish at sea from a number of different rivers), whilst avoiding the imposition of mandatory catch and release on anglers.

Major campaign success – all salmon netting to end in 2019!

The Environment Agency recently announced that, in no small part due the Angling Trust’s campaign, that all targeted netting for salmon in England will end in 2019. The north east coastal drift net salmon fishery, which takes the vast majority of salmon, will close in 2018, with other net fisheries to follow.

Please find more information on the EA proposals for 2018 here.

On all rivers, they would like to see better practice being used to ensure that as many released fish survive as possible. The Angling Trust, Atlantic Salmon Trust and FishPal have teamed up to make a series of films called “The Gift” which are available on YouTube. The film explains the best tackle and techniques to avoid causing damage to fish so that they can go on to spawn successfully. We understand that the Environment Agency may also be consulting on by-laws about types of tackle which may be used. Please make your views about these proposals known through the consultation process, and if you’re a member of the Angling Trust and Fish Legal, please let us know too so that we can represent you.

Part 1 in a series of films produced by the Angling Trust, Atlantic Salmon Trust and Fishpal to help promote best practice catch and release fishing for Atlantic salmon. Other films in the series are available on YouTube here.

Scotland has of course already implemented its system for classifying the Conservation Status of rivers, imposed mandatory catch and release in category 3 rivers and ended all mixed stock netting. We have recommended a voluntary approach to Natural Resources Wales, which seems intent on mandatory catch and release. We will be doing so again when they consult on their measures later this year.

Of course, the real threat to salmon comes not from anglers, but from pollution, predation, fish farming, over-abstraction and hydropower. We will keep pressing for real progress to address these and other issues affecting our magnificent fish.

This campaign is no longer active and was archived in June 2020.