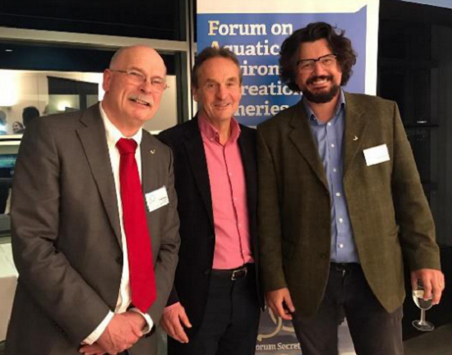 David Mitchell, the Angling Trust’s Head of Marine, went to the European Parliament in Strasbourg with colleagues from the European Anglers Alliance for the relaunch of the Forum on Recreational Fishing and the Aquatic Environment.

EU legislation is increasingly including recreational fishing – but not in a positive way – and may continue to do so even after the UK leaves the EU.

David met the new EU Commissioner and a number of MEPs from different parties including Chris Davies who is chair of the Parliament’s influential Fisheries Committee.

David raised a number of issues with Mr Davies including proposals for recreational fishing in EU legislation and the outcome for sharks at the recent ICCAT meeting. He also highlighted the importance of shark fishing in South West England and Wales.

Hosted by German MEP Niclas Herbst, representatives from the EAA were joined by colleagues from the European Fishing Tackle Trade Association (EFTTA) and Members of the European Parliament from a number of EU countries.

As Chair of the event, Niclas Herbst underlined the importance of the Recfishing Forum and said: “I am convinced that the discussions we have in the Forum matter a lot for us as MEPs, to regularly check with stakeholders and people that the policies we adopt are practicable and fit for purpose.”

Mr Virginijus Sinkevičius, Commissioner for Environment, Oceans and Fisheries said that anglers’ commitment to sustainable fisheries and conservation of the environment fit in with some of his key priorities such as clean water and full implementation of the Common Fisheries Policy.

He also stressed that “data is gold” and added: “We need more data on the recreational fisheries sector to make sure that our decisions are based on scientific evidence.”

“This is about a leisure activity that brings people together, contributes to the conservation of the environment and biodiversity, provides jobs in many SMEs and perspectives to communities in coastal and rural areas” said Mr Bel.

“Recreational fishing also offers a positive contribution to health, social and cultural well-being of citizens and communities in Europe,” continued Fred Bloot. “Together we can make better policies in Europe in the area of fisheries and environment,” he added, highlighting the Common Fisheries Policy and the Water Framework Directive as two key legislations to work on.