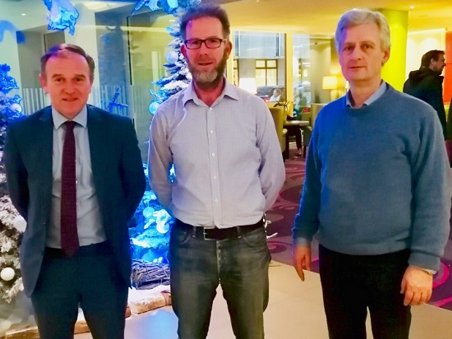 Hard work by Save Our Sea Bass and the Angling Trust has resulted in a better deal for recreational bass fishermen next year. Anglers will be allowed to keep up to two bass per day from March 1st to November 30th after the EU Council of Ministers agreed catch limits for 2020.

This positive move repairs some of the damage done since 2015 when the public’s ability to take a bass for the table was first reduced then completely extinguished by the EU for most of 2018, and only increased to one fish for a seven–month period in 2019.

The Angling Trust has been working with the European Anglers Alliance and Save Our Sea Bass in pressing DEFRA ministers and officials to ensure a fairer deal for anglers was achieved in 2020. Lobbying has occurred over the course of 2019 to provide the evidence in support of increasing the bag limit for anglers.

The Angling Trust had called for an increase in the bag limit to three fish per day for seven months, based on scientific evidence.

“This is great news for bass, as the science shows that the stocks are recovering as a result of the restrictions on commercial netting. It’s also great news for the fishing public whose right to take a few fish for the table has been severely curtailed in recent years. We still have some way to go before the public’s access to our bass stock is back to where is should be but this welcome news shows that anglers are being listened to and that our views have been taken into account.”

“I am delighted to see this morning that the restrictions on bass anglers have been relaxed. Recreational anglers didn’t cause the problem with bass stocks and they have been unfairly penalised. We must follow the science and make good decisions based on the evidence.

“The Angling Trust have shown once again their influence on policy and I am delighted to be working with them on behalf of thousands of sea anglers in the UK.”

David Curtis, from Save Our Sea Bass, was in Brussels following the EU negotiations which went on late into the early hours of the morning. He said:

“It’s taken a lot of time and a great deal of hard work, but it’s finally paid off. Both the science and our own catches told us that bass stocks were in trouble and that action was required. Whilst we would have preferred a three fish bag limit most anglers will be pleased with two and an extended season.”

The EU countries also agreed to respect the scientists’ lower sustainable catch recommendation meaning that the stock should continue to rebuild over 2020 in a win-win for anglers and the long-term health of the stock.


Winter is a fantastic time of year to get outdoors and enjoy some time next to the water. The new Ge…
Read more
The Angling Trust has joined forces with bait manufacturers Dynamite and Mainline in urgently seekin…
Read more
After a hectic and successful week navigating the consequences for angling of the government’s decis…
Read more
Martin Salter has timely advice for all anglers, along with the inside story of how we managed to ge…
Read more
The government rolled over the 2020 bass fishing measures into 2021 as we waited an outcome from the…
Read more
With anglers everywhere opting to keep it safe and local at present, short sessions make perfect sen…
Read more
The Government have now formally responded to the representations made by the Angling Trust. We have…
Read more
Following yesterday’s written communication from the Cabinet Office that fishing is to be proh…
Read more
The regulations have now been published and confirm this evening’s message from the Cabinet Office t…
Read more
It might be cold out there, but there are still some great fishing opportunities. Angling Trust blog…
Read more
Dave Munt is a Club and Fishery Development Officer for the Angling Trust and he gets to work with s…
Read more
Dawley Angling Society based in Telford, Shropshire is supporting the ‘Take a Friend Fishing&#…
Read more