Sunday 8th March brought the last bank qualifier for the 2019/20 campaign at Blackdyke Trout Fishery in Norfolk.  Fifteen anglers fished this rearranged qualifier which was originally cancelled due to the storm conditions that were forecast on the original date. The wind however was there to greet the anglers on their arrival making casting and fishing tricky for those anglers competing at the second attempt.

The match was nearly twenty minutes in when the first fish was caught at 9:19 by Billy Thompson. The first session was unusually quiet. Things picked up in the second session with John Hardy and Paul Kitchen taking three fish each. At lunch 12 anglers had caught with it all to fish for in the afternoon sessions.

The afternoon saw anglers continue to catch with a final tally of 52 trout for a rod average of 3.5. Tactics varied but is was the indicator with shammies and shimmies and a Di3 with lures fished quickly which accounted for the majority of the fish.

The AT-TEFF would like to thank the team at Blackdyke Trout Fishery for hosting this qualifier and providing breakfast and lunch for the competitors and Lee Cartmail for running the event. 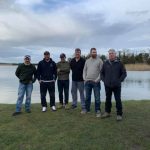 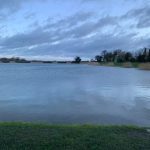