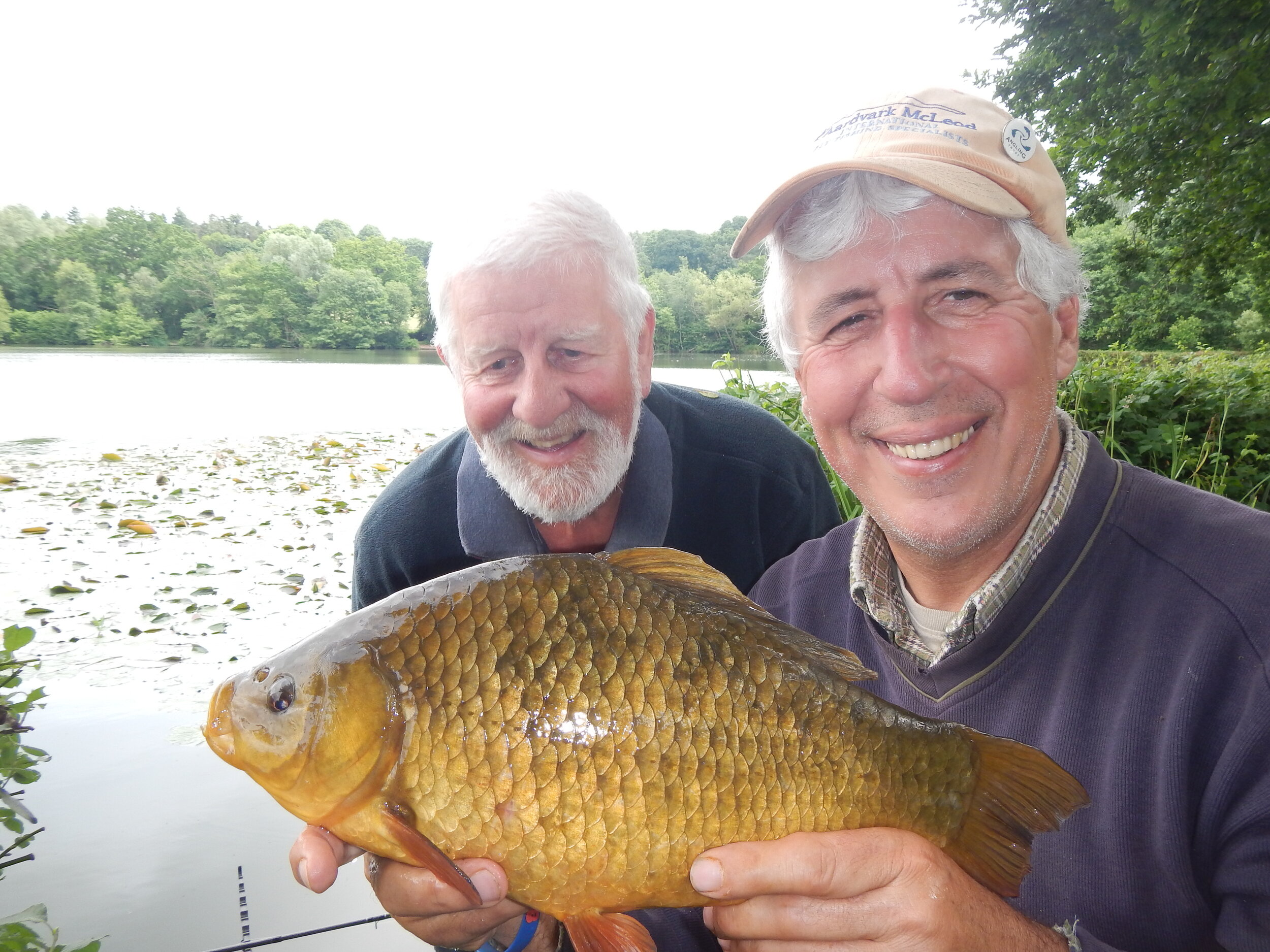 The Angling Trust ambassador and artist Chris Turnbull and I have a lot in common. We have a romantic attachment to the essence of fishing, we celebrate diversity in all its forms and we are turned off by the commercialisation of our sport and the seemingly endless drive to create a ‘king carp monoculture’ in the UK. We are also both old hippies who remember with some fondness, and not a little fuzziness, the era and the music of Neil Young from which the title of this piece is derived!

As it happened I had been mulling over our ‘Campaigns Grid’ at the Angling Trust and was looking for a new stillwater issue that could connect angling and conservation when Chris phoned me up to see if we would be interested in getting involved in a crucian carp project. We hit it off straight away and, after a preliminary meeting with the Environment Agency in Peterborough the National Crucian Conservation Project (NCCP) was formally launched at the Angling Trust Coarse Fish Conference in Reading in May 2014.

It’s worth looking back at why we started, what objectives we set ourselves and how the world of angling has responded.

Chris put together a very helpful short paper entitled: The case for the conservation of Crucian Carp as an angling resource which nicely summed why action was needed.

Setting out the plight of crucians he wrote:

The crucian carp (Carassius carassius) is a native British species of fish that was once common throughout much of England. Primarily a still water species, crucian carp are traditionally associated with smaller, shallower still waters, such as ponds, marl pits, some estate lakes and millponds. In recent times, however, crucian carp have fallen onto hard times for a variety of reasons, leading to their local extinction in many areas that were once strongholds of the species. Many of the ponds once known to hold them have suffered from drought or habitat deterioration through neglect, while other waters have been lost altogether due to being backfilled in order to develop the land. Above and beyond this, however, the overriding factor behind the decline of the species has been the introduction of closely-related non-native species of fish into traditional crucian habitats, including various strains of king carp Cyprinus carpio and Goldfish Carrasius auratus with which crucians have been able to freely interbreed resulting in high levels of hybridization occurring, leading to the gradual decline of the genetic integrity of the species resulting in its localized extinction eventually taking place.

Today this situation has become critical putting crucians under such pressure that they are can be considered to be an endangered species. King carp now dominate angling to such an extent that few fisheries are without them and unless angling clubs and fishery managers take proactive steps to conserve crucian carp, it is entirely likely that they will eventually become nationally extinct apart from in a tiny number of fisheries currently being managed as specialist crucian carp fisheries.

Serious moves need to be made to extend the number of specialized crucian fishing waters, while efforts must also be made to protect and restore the few remaining natural crucian populations that exist in unmanaged waters which are likely to eventually die out unless special efforts are made to conserve them.

The National Crucian Conservation Project set out with the laudable mission of seeking to reverse the decline in crucian habitat and to promote designated and accredited ‘true crucian’ fisheries. We brought together an impressive collection of knowledge and expertise including crucian champion and ‘Crock of Gold’ author Peter Rolfe who has been developing crucian ponds for over 40 years and Dr Carl Sayer from University College London who has researched the decline of crucian habitat in his native Norfolk and is an acknowledged expert on the species. I agreed to chair the group on behalf of the Angling Trust and secretarial and technical support was provided by the Environment Agency’s Roger Handford and then Russell Robertson. Also represented on the NCCP committee is the Government’s Centre for Environment, Fisheries and Aquaculture Science (CEFAS) and the Institute for Fisheries Management (IFM). The full aims and objectives published in 2014 are set out below.

The National Crucian Conservation Project is a group of representatives from public, academic and voluntary sector organisations and individuals who share a common interest in furthering the status of Crucian Carp (Carassius carassius) in the UK.

The primary objectives of the project are to:

The resulting benefits will include: improved understanding and protection of ‘wild’ or ‘pure’ crucian stocks; more opportunities to catch the species; and better sharing of information on lake and pond conservation.

Some suggested outputs and/or aspirations are:

So what’s happened since?

It’s fair to that for a project with next to no funds and very few resources, save for a lot of enthusiasm, expertise and goodwill to draw upon, we have done remarkably well. New crucian waters have begun to spring up in various parts of the country and some existing crucian waters have been improved and rejuvenated.

Early examples included: Little Melton Lakes in Norfolk, Rocklands Mere and Mill Lodge Farm Fishery, both also in Norfolk.  Yaddlethorpe Ponds at Scunthorpe, Grace Lake at Biggleswade, the Moat at Marsworth, Kinver Freeliners water, Warwick’s Water in Newbury, Holtwood Ponds at Christchurch and Edmonsham Ponds at Wimborne. There are many more, including some we will probably never hear of, created by angling clubs and fishery owners inspired by our efforts and guided by the helpful online resources available on the main Angling Trust website.

It is clear that our ‘crucian crusade’ hit the spot in the minds of many anglers and fishery owners and we have now had hundreds of enquiries from individuals wanting to help conserve and promote this fabulous little species and from clubs eager to learn how create bespoke crucian fisheries for their members.

Role of the National Coarse Fish Rearing Unit at Calverton

None of this would have been possible without the wholehearted support of the National Coarse Fish Rearing Unit Calverton whose staff have been magnificent. They have not only provided huge numbers of top quality one and two summer crucians for stocking but have been on hand to offer advice and expertise. All of us at the project are grateful to Alan Henshaw and his team for their passion, commitment and professionalism. Crucian production increased at Calverton in response to the increased demand caused by the project. The latest figures show that between 2013 and 2016 they stocked a total of 152,046 DNA tested Crucians into 195 separate waters.

We have produced several videos which show how clubs can go about developing crucian fisheries by working in partnership with their local EA area teams. We have a dedicated crucian webpage on the Angling Trust site which hosts all our videos and Fact Sheets including the new crucian ID guide produced by the EA.

There are two versions of the new guide which have been produced by the Environment Agency fisheries experts in collaboration with the Angling Trust and the National Crucian Conservation Project. The quick version can be easily downloaded in hard copy or to a smartphone for those anglers who might want to double check their captures.

Much of the work we have done so far has been guided by Peter Rolfe who is an absolute font of knowledge and incredibly helpful. Peter has his own crucian website at: www.crucians.org

His site also hosts the sterling work done by angling author and fellow crucian enthusiast Mark Wintle who has painstakingly put together a categorised list of all the crucian waters that we know. It can be found here: http://www.crucians.org/html/crucian_fisheries.shtml

There is thriving Facebook group – The Association of Crucian Anglers (ACA) – led by Chris Netto and Chris Turnbull and an associated blog edited by Jason Skilton: http://theassociationofcruciananglers.blogspot.co.uk/

The group has provided a useful forum through which to announce events, share news and information and generally bring crucian enthusiasts together online.  Two national fish-ins at Godalming’s Marsh Farm have been held and new friendships and partnerships have blossomed.

The idea for a dedicated ‘Catch a Crucian Month’ came from the ACA and from Chris Netto in particular. The Angling Trust agreed to set up a judging panel for the best photos submitted in various categories and to seek sponsorship from the Tackle Trade.

The competition was launched in 2016 and has run for four years. It is designed to promote crucians as a species, to assist in the recognition of true crucians, to encourage more anglers to take up crucian fishing and to highlight the need to develop specific crucian waters in line with the aims of the National Crucian Conservation Project. The competition is sponsored by Bait-Tech and Angling Direct with some great prizes. The entries were judged by a panel of leading crucian crusaders including Chris Yates, Hugh Miles from Passion for Angling, the author and crucian expert Peter Rolfe, big fish specialist Gary Newman and of course Chris Turnbull.

All details including the winner entries can be found at www.catchacrucian.wordpress.com

We have decided to put the competition on hold for now, in part due to the Coronavirus lockdown.

Was it all worth it?

There is no doubt that the project has been an outstanding success with more and more bespoke crucian waters coming online and a far greater number of angling clubs and fishery owners now wanting to restore and develop ponds specifically for crucian conservation and fishing. We have a database of crucian waters (which needs lots of updating and verification), we have our crucian ID guide and have produced invaluable guidance for fishery owners and clubs on best practice in managing a crucian fishery. Angling clubs have engaged, the tackle trade has engaged, the guys at the EA have been great and most important of all this wonderful little species now has a fighting chance of a brighter future. You can be assured that there’s now a dedicated band of crucians enthusiasts all still searching for that ‘Crock of Gold’!