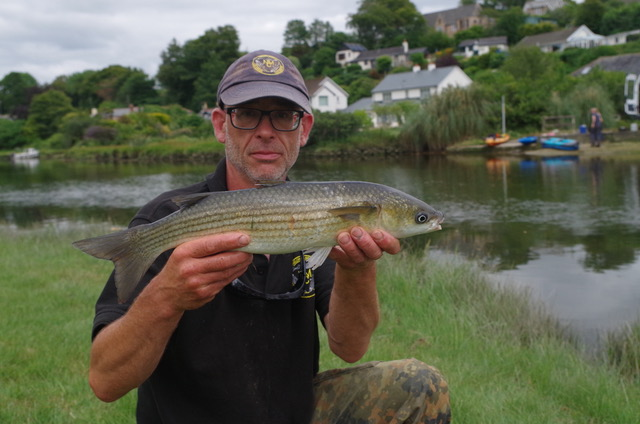 In this next instalment, Andy Burt, Chairman of the National Mullet Club, talks about why grey mullet species are threatened, not least by targeted netting.

Scientifically there is a lot we do not know about grey mullet, strange for something we were used to seeing during the summer months in our harbours and estuaries. What we do know is fascinating; they can grow to over 15lbs, not especially interesting but then consider they might be 25 years old, they did not mature until they were maybe 12 years old. They can migrate often hundreds or even thousands of miles from the Atlantic coast of France in winter to the north of Iceland in summer returning to the same place netting and predation willing each summer, then, aggregating in huge shoals after Christmas spawning, who knows where, no man has ever seen this. We just know they aggregate and are full of spawn, disappear and return a few months later spent. The fry are pelagic and drift with the currents inshore where they hopefully they will survive until they mature.

For years they were largely left alone living as they do on detritus, often around sewer outlets grey mullet were obviously not a fish most people would choose to eat, they don’t even sound appetising. Yet, in recent years more and more effort has gone into promoting them as a food fish. Some disreputable fish sellers try and re market them as ‘silver mullet’ or give them other more appealing names. Others lie as to where they were caught, not for them the horrible truth of an inshore gill net and a diet of mud and chemicals, no they were far out to sea…

Overfishing especially for bass in the last 20 – 30 years has meant commercial fishermen have fished further inshore and for other species not previously of commercial interest. Subsequently as stocks deplete more and more mullet end up in these nets. Recently conservation measures forced upon the commercial sector to reverse the crash in bass stocks has put extra pressure upon the fragile grey mullet stock which now finds itself a target to allow continued netting for bass. Why? Well, the average market value upon landing of grey mullet is around £2.20/Kg, for bass, £12/Kg or often more, you do the maths.

Offshore grey mullet are often caught alongside other species in what is termed a ‘mixed fishery’. Aside the use of monofilament which should never be allowed, (a different issue but an important one), these fisheries generally operated by the small U10 metre fleet should not threaten grey mullet stocks on their own. What must be stopped to restore grey mullet stocks are the targeted fisheries falling basically into two types:

A fundamental principal of fishery management is that you don’t net aggregations, let alone spawning ones! This happened for years primarily in Cornwall where the huge shoals no fail to aggregate and greedy short sighted fishermen still target them in winter using seine nets. Until a few years ago pair trawlers prowled the channel looking for aggregations of bass, a fish that has a lot in common with grey mullet. They would spot an aggregation of fish on the sonar and net the whole lot. On retrieval they would find grey mullet not bass and often discard the whole lot dead before continuing to destroy bass stocks or sell them for little money for fertiliser or fish meal. Fortunately, the practice of pair trawling in this manner has been stopped but much damage was done to both bass and grey mullet stocks.

The beach seines were once essential to many small fishing communities in Cornwall giving them much needed food and income in winter months. Times have changed though; grey mullet are not the abundant resource they once were and any income gained from netting these aggregations amounts to a bit of beer money. The damage to the grey mullet stock is huge though. In 2016 an aggregation in Sennen cove was netted, over 10 tonnes in one go, in one night. The price crashed to £0.20/Kg and a once productive winter fishery has now gone. This amounts to greed and stupidity, there is no place for it in today’s world and it needs to be stopped.

Targeted fisheries now pose the biggest risk to grey mullet stocks not only because authorities are loath to manage all stocks  – something they are supposed to do; but because these fisheries are actually right in the nursery and refuge areas vital for both grey mullet and other species such as bass. Commercial fishermen like to sell grey mullet of about 38cm in length around 7 – 8 years old, the female thin and thick lips (golden greys are not present in the same areas in large numbers in these areas and can be discounted).  About 50% are mature at about 47cm and 12 years of age, a size that is termed as L50 allowing the fish to breed at least once, it is considered the minimum a MCRS Minimum Conservation Reference Size should be set at. It is obvious that they stand very little chance of growing to maturity and spawning especially when they will likely be caught in the nets at a far smaller size.

Any mullet angler will tell you they are seeing fewer and finding it increasingly difficult to catch grey mullet especially thicklips, walk around a harbour in summer and look under boats where a few years ago grey mullet could be spotted hiding under them, now they are gone, even boaters who said they would at one time be woken by grey mullet scrapping the algae from the bottom of their boats now report an eerie silence.

The National Mullet Club has been keeping records for over thirty years and these records show over the last ten years not only a decline in the number of mullet caught but importantly a sharp decline in overall size a known indicator of declining stock. Over the same period a decline has also occurred in the commercial landings. When asked about this fishery management try and dismiss it saying it could be down to number of factors, look a little deeper into the landing data and you find that the amount of grey mullet landed compared to effort has declined dramatically. Strange they often fall silent at this point!

Authorities are supposed to manage stocks in a sustainable manner and for all stakeholders of which recreational anglers are one. It would be great if sustainability were at the heart of fishery management in the UK but unfortunately, quite obviously it is not! Fish stocks are managed for personal gain of commercial fishermen and nothing more it would appear. This is demonstrated by Brexit which has been promoted as an opportunity to take back control and manage our fisheries in a world class manner. The question is though, why in these inshore waters where we have always had this opportunity, for fish considered commercially unimportant, has this never happened? What has changed now? Until the mindset changes nothing else will.