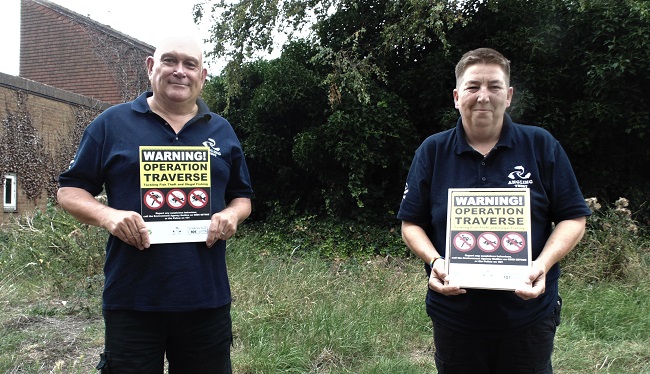 Two Angling Trust volunteer bailiffs on the lookout for illegal activity at a river in Northampton rescued an elderly man stuck in mud and up to his chest in water.

Area Co-ordinator Vanessa Warner and fellow volunteer bailiff Steve Allen had stumbled across a pair of trainers and a dog lead at the top of a steep bank when they heard a commotion in the thick reed beds below.

Beating a path through the overgrown weeds and nettles, Vanessa and Steve peered over the reeds and were amazed to find the grey-haired chap unable to free himself from the riverbed and with water up to his chest.

He told the pair he had been trying to free his nine-year-old dog who had become trapped in the reeds when he fell from the bank into the water. He had been in the water for about 30 minutes when the volunteer bailiffs found him and was feeling very cold.

Vanessa and Steve kept the man calm as they lay down across the nettles to grab hold of his leather belt. After a few attempts they were able to free him sufficiently to enable him to scramble out of the water to the safety of the bank.

With the man still worried about his dog, Vanessa and Steve then freed the tired, scared animal from the reeds further downstream.

Concerned for the man’s welfare, Vanessa and Steve suggested they call an ambulance, but he declined saying he just wanted to get himself and his dog back home and promising to seek medical assistance later if needed.

Vanessa, a recent recipient of an Angling Trust Volunteering Excellence Award, said: “Somebody must have been looking out for this man because no-one really goes down there. Being on a VBS patrol probably saved this man and his dog. He was so very tired and cold when we got him out.”

Steve said: “If we hadn’t been there at that time, there could easily have been a totally different outcome as he was in a really difficult situation with no chance of getting out on his own and totally hidden from view.”

Vanessa and Steve had been patrolling the river after a local resident had told them they had seen “something odd happening” in a very rural area known locally as Mill Lane, a river that runs from nearby Pitsford reservoir and through Northampton before joining the River Nene.

Mill Lane is a remote area that has very few visitors with the steep banks very overgrown. Despite this, both Vanessa and Steve were able to locate illegal crayfish traps and set lines along one of the banks, tied to electrical wiring, nylon washing lines and old ropes hidden by undergrowth.

None of the eight traps they found had otter guards attached but one contained a small pike which was safely returned to the water. It was while continuing their search on the opposite bank they stumbled across the man and his dog.

The Voluntary Bailiff Service is part of the Angling Trust’s Fisheries Enforcement Support Service and is funded from fishing licence income as part of the National Angling Strategic Services contract with the Environment Agency.

Paul Thomas, Angling Trust Regional Enforcement Manager for the East of England, said: “This sort of action by our valued volunteers serves to further prove just how much of an asset to the rural community our Voluntary Bailiff Service actually is.  People think that we deal only with fishing related matters but, as demonstrated by Vanessa and Steve, being the rural community’s eyes and ears along our watercourses means that our volunteers are able and willing to react to a wide range of situations.

“On this occasion, Vanessa and Steve have disrupted serious illegal activity and saved someone’s life. I commend them for their awareness and have no doubt that their prompt actions saved the lives of both the gentleman and his dog that day.”

Karen Hinson, Angling Trust’s National Volunteers Manager, added: “Well done to Vanessa and Steve for their heroic action that day, another example in a growing number where our volunteers have potentially gone above and beyond to help others. Whilst I am extremely pleased that everyone involved came away relatively unscathed from this incident, I think it also serves as a reminder of how hazardous our waterways can be even at this time of year and the caution that is required particularly when alone.” 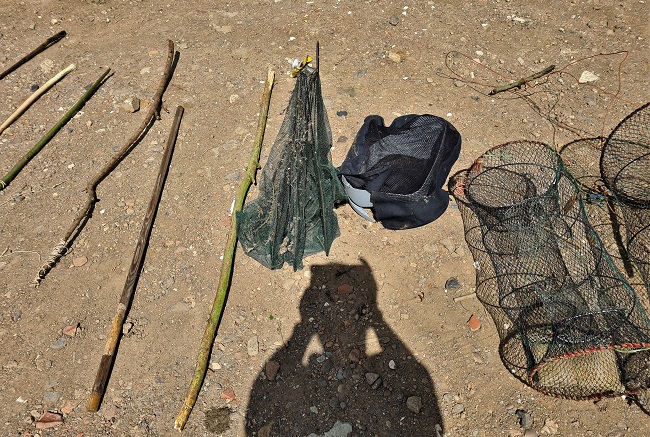 Some of the recovered traps and lines


Moves to ban fishing at four popular lakes in Kent’s Darent Valley have been met with strong opposit…
Read more
Hot (or cold?) on the heels of our winter special fishing tips blog, we have more top advice to keep…
Read more
Anglers and river campaigners have reacted with disappointment to today’s ‘over-hyped’ announcement…
Read more
While it’s something none of us want to witness, it’s vital we know how to react when a…
Read more
The campaign to save freshwater fish from elimination in Norfolk’s Hoveton Great Broad has taken a b…
Read more
The Angling Trust are sad to report the passing of volunteer bailiff Steve Allen, the recipient of a…
Read more
Winter is a fantastic time of year to get outdoors and enjoy some time next to the water. The new Ge…
Read more
The Angling Trust has joined forces with bait manufacturers Dynamite and Mainline in urgently seekin…
Read more
After a hectic and successful week navigating the consequences for angling of the government’s decis…
Read more
Martin Salter has timely advice for all anglers, along with the inside story of how we managed to ge…
Read more
The government rolled over the 2020 bass fishing measures into 2021 as we waited an outcome from the…
Read more
With anglers everywhere opting to keep it safe and local at present, short sessions make perfect sen…
Read more