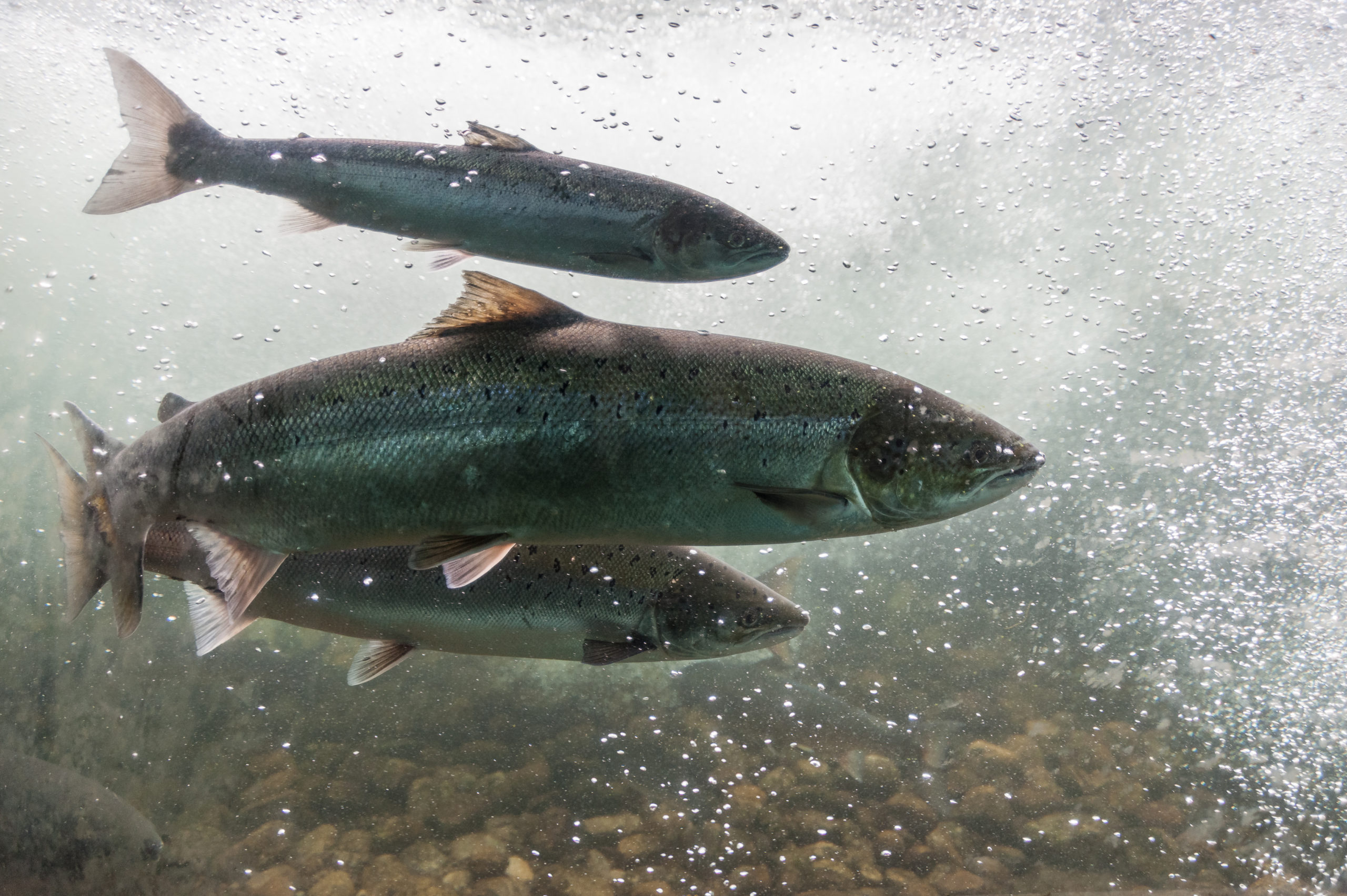 With hydropower, overfishing, climate change and pollution on the rise, monitored populations of migratory freshwater fish species have plummeted by 76% on average since 1970, according to the first comprehensive global report on the status of freshwater migratory fish, published by the World Fish Migration Foundation and Zoological Society of London. Migratory fish, such as salmon, trout and Amazonian catfish, are vital to meet the food security needs, as well as support the livelihoods of millions of people around the world. They also play a critical role in keeping our rivers, lakes and wetlands healthy by supporting a complex food web. Now, their populations are under immense threat from human-made impacts’ and require urgent action to halt and then reverse the alarming decline.

The report reveals a 76% average decline in populations* for the period of 1970 to 2016 including a staggering average decline of 93% in Europe. This is higher than the rate observed in terrestrial and marine species but in line with the overall decline observed for freshwater vertebrate populations as a whole (83%)1.

Arjan Berkhuysen, Managing Director of the World Fish Migration Foundation says, “Catastrophic losses in migratory fish populations show we cannot continue destroying our rivers. This will have immense consequences for people and nature across the globe. We can and need to act now before these keystone species are lost for good.”

Habitat degradation, alteration, and loss account for approximately half of the threats to migratory fish. Wetlands are essential habitats for migratory fish species, but, globally, wetlands are disappearing three times faster than forests2, while dams and other river barriers block fish from reaching their mating or feeding grounds and disrupt their life cycles.

Over-exploitation, such as unsustainable fishing and accidental by-catch account for around one- third of the threats to these populations. Furthermore, populations are threatened by the impacts of the climate crisis as changes in temperature can trigger migration and reproduction, causing these events to happen at the wrong time, and therefore misalign reproduction and the period of greater food availability in a specific habitat.

“Migratory fish provide food and livelihoods for millions of people, but this is seldom factored into development decisions. Instead, their importance to economies and ecosystems continues to be overlooked and undervalued – and their populations continue to collapse,” said Stuart Orr, WWF Global Freshwater Lead. “The world needs to implement an Emergency Recovery Plan that will reverse the loss of migratory fish and all freshwater biodiversity – for the benefit of people and nature.”

Migratory fish are invaluable to human health and the global economy. Fish and fish-byproducts represent one of the world’s most traded products within the food sector. The recreational fishing industry alone is worth billions of dollars and tens of thousands of jobs. Overall, the figures represent the need for more protective measures for migratory and freshwater fish worldwide. In North America, the decline in populations is less severe showing a 28% average decrease. The slower decline suggests that management can have an impact. Some management strategies include management of fisheries, habitat restoration, dam removal, setting up conservation sanctuaries, species-focused management and legal protection.

In the USA, for example, many dams have been removed over the last few decades and the dam removal movement is growing. In 2019 alone, over 900 upstream river miles were reconnected through dam removal projects, improving habitat and biodiversity in rivers and their resilience to a changing climate. This is beginning to happen in Europe, as well. Dam removal has significant positive environmental impacts, is cost-effective, and supports job creation. Several case projects have shown migratory fish populations come back quickly in response to dam removal and nature-like solutions. For instance, in 2016, The Penobscot River Restoration Trust partners, including the Nature Conservancy, completed a river restoration in the Penobscot River in Maine, USA, opening up over 3,200km of habitat. The following spring, the river herring numbers grew from a few hundred to nearly 2 million.

“Rivers and migrations are the connective tissue of our planet – and migratory fish are bellwethers for not just rivers, but for the countless other systems they connect, from the deep sea to coastal forests. Losing these fish means losing so much more,” said Jeffrey Parrish, Global Managing Director for Protect Oceans, Land and Water at The Nature Conservancy. “By factoring in these species and systems into sustainable energy and food production, and by investing in their protection and restoration, we can bring them back.”

There is still an opportunity to turn the tide through more research to understand the fate of freshwater migratory fish and by developing practical solutions that restore and protect these animals. The global community need to do more to protect free-flowing rivers and guide basin-wide planning by addressing existing threats, adhering to ongoing conservation initiatives and water protection laws, investing in sustainable renewable alternatives to the thousands of new hydropower dams that are planned across the world and fostering public and political will.

“The global decline in freshwater fish species remains poorly appreciated among national and international policy making bodies,” says William Darwall, Head of the Freshwater Biodiversity Unit in the International Union for Conservation of Nature’s Global Species Programme. “This report will hopefully increase the importance given to this unprecedented biodiversity decline in policy targets and lead to the urgent actions necessary to safeguard this vitally important component of biodiversity which serves as a critical resource for so many people.”

There are many initiatives around the world supporting the recovery of migratory fish species and freshwater biodiversity in general. The recently released Emergency Recovery Plan, published in BioScience, highlights a variety of measures that together will transform the management and health of rivers, lakes and wetlands for the benefit and health of freshwater biodiversity. The new Global Swimways Initiative aims to balance conservation of migratory fishes with human development in and around rivers, and will be the first step towards connecting fish, rivers and people globally using ‘swimways’ – fish migration routes. For the past five years, the Dam Removal Europe coalition has advocated for the removal of out-of-use dams in Europe to free Europe’s rivers from over 100,000 obsolete barriers. Since 2014, the WFMF has organized World Fish Migration Day every two years to raise awareness about migratory fish, the next one is scheduled on October 24 , 2020 with over 50 countries participating so far.

Lead author Stefanie Deinet from ZSL: “To understand how populations of migratory freshwater fish have changed over the past 50 years, we looked at data from 1,406 populations of 247 species for this report. We run similar analyses for a range of different ecosystems and groups of animals as part of our work on the Living Planet Index. A 76% average decline is one of the most severe we’ve found.”

Herman Wanningen, Founder of the World Fish Migration Foundation: “The statistics are shocking but we know migratory fish populations can bounce back. We need to act now before populations get to the point where they are too low to recover. Now is the time to value migratory fish and the rivers that sustain them.”

*The average figure was found using abundance information for 1,406 populations of 247 fish species listed on the Global Register of Migratory Species as using freshwater for some of their migration.


Following the government’s announcement of a roadmap out of lockdown and the resumption of outdoor e…
Read more
When Emma Harrison got in touch with our Head of Participation Clive Copeland late last year, the fi…
Read more
With the state of our rivers very much in the public eye since lockdown began, Fish Legal, Angling T…
Read more
The Angling Trust Fisheries Enforcement Support Service (FESS) has welcomed the launch of a new asse…
Read more
The Angling Trust is backing proposals by the UK government to ban damaging fishing activities, such…
Read more
Many anglers make use of their own boats to go fishing.  This can add a lot of cost to the pleasure…
Read more
Leading tackle manufacturer to support organisation’s work to protect fishing and grow sport T…
Read more
Let’s face it, the year 2020 was pretty well… rubbish! The new virus, lockdowns and rest…
Read more
The Metropolitan Police Service (MPS) – the UK’s largest police force – have pledged to support the…
Read more
The Angling Trust are delighted to receive the support of River Action, the newly formed campaigning…
Read more
David Mitchell, Head of Sea Angling, shares his views on recreational sea angling being represented…
Read more
Anglers in Kent are celebrating the decision of Kent Wildlife Trust to allow angling to continue on…
Read more