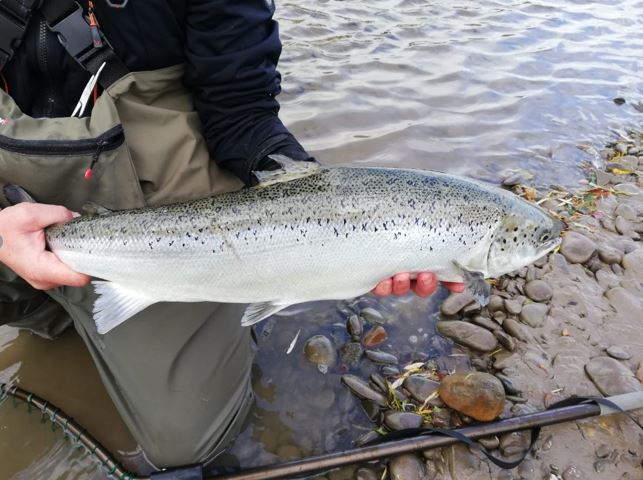 On 20th August 2020, Storm Ellen caused damage to a fish farm in the Firth of Clyde on the Scottish west coast that resulted in the escape of almost 50,000 farmed Atlantic Salmon. Over 100 of these fish have been caught by anglers fishing rivers on the Scottish West coast in the broad proximity to the farm from where they escaped. At least 5 farmed salmon have also been caught in Cumbrian rivers and the Border Esk. It is well established that potential interbreeding between escaped farmed salmon and native wild salmon is damaging to the native stock, so it is strongly recommended that any farmed salmon caught be humanely destroyed and removed from the river.

The Environment Agency have now issued a local enforcement position which will allow anglers to remove these fish and send scale samples for analysis.

This new enforcement position is temporary and can be removed at any time. It covers the following rivers:

We would encourage all angler to read the detail of this Temporary Local Enforcement Position themselves by clicking this link however the key conditions are that:

Only farmed salmon may be taken and killed. Wild salmon must be returned to the water unharmed (unless the provisions of the River Leven and Crake Byelaws apply).

The farmed salmon are relatively easy to distinguish from wild salmon. Specifically, the farmed salmon tend to have ragged dorsal, tail and pectoral fins, often have shortened or damaged gill covers, are more heavily spotted, and tend to be more silver in appearance than the wild salmon that are much more coloured at this time of year. The escaped farmed salmon are mostly of uniform size around 8 to 9 pounds in weight. A visual guide to demonstrate the difference between wild and farmed salmon is available HERE

All captured farmed salmon must be reported as quickly as possible using the Fisheries Management Scotland online reporting form This can be completed by mobile phone.

A sample of scales must be scraped from each captured fish, wrapped in paper and sent to the Ayrshire Rivers Trust Office, 1 Gibbsyard, Auchincruive Estate, Ayr, KA6 5HW.

Anglers must complete their annual catch return to the Environment Agency as normal after the end of the fishing season, including the details of any farmed salmon caught.


The campaign to save freshwater fish from elimination in Norfolk’s Hoveton Great Broad has taken a b…
Read more
The Angling Trust are sad to report the passing of volunteer bailiff Steve Allen, the recipient of a…
Read more
Winter is a fantastic time of year to get outdoors and enjoy some time next to the water. The new Ge…
Read more
The Angling Trust has joined forces with bait manufacturers Dynamite and Mainline in urgently seekin…
Read more
After a hectic and successful week navigating the consequences for angling of the government’s decis…
Read more
Martin Salter has timely advice for all anglers, along with the inside story of how we managed to ge…
Read more
The government rolled over the 2020 bass fishing measures into 2021 as we waited an outcome from the…
Read more
With anglers everywhere opting to keep it safe and local at present, short sessions make perfect sen…
Read more
The Government have now formally responded to the representations made by the Angling Trust. We have…
Read more
Following yesterday’s written communication from the Cabinet Office that fishing is to be proh…
Read more
The regulations have now been published and confirm this evening’s message from the Cabinet Office t…
Read more
It might be cold out there, but there are still some great fishing opportunities. Angling Trust blog…
Read more