Firstly, a big well done to all the competitors for their exemplary conduct in adhering to the strict Covid restrictions that we had to follow to in order to allow this match to take place.  The current Covid situation had an impact on teams attending this year though we still had a good turnout of 15 teams (150 anglers).  Also a massive thank you to Drennan Lindholme owners, Aaron & Neil Grantham for allowing us to re-arrange this National Championship event after it was postponed back in April.

Some of the anglers though, may have wished it was called off completely as Lindholme was not in its usual productive form.  Typical weather for this event saw a cold snap overnight followed by strong winds and lots of rain during the match making it very difficult to attain perfect bait presentation, add to that the immense angling pressure the venue has seen over the last few months its not really surprising it was a difficult match.   David Shires (North West Angling) took the Individual honours with a decent catch of 40.075Kgs from Bennys peg 13.  David caught 35 F1’s and silvers on maggots fished at 11m.  Runner up, Jay Baker (Stainforth Angling) was a fair way behind with 28.675Kg from Strip peg 4 and 3rd place went to Alex Reynolds (Team Browning UK) with a level 27Kg from Bennys peg 4.

But the match is all about the Team result and taking home the winners cheque of £2500 (donated by Drennan Lindholme).  Usually this event is a tight battle between Lindholmes home team and local rivals Drennan Barnsley, but this year it was Drennan Spotted Fin North West that gate crashed that party.  Recording 4 section wins and no one finishing lower than 4th in section they dropped just 13pts to take take the crown of Angling Trust Stillwater Commercial Team National Champions 2020 with 67pts.  It was indeed very tight between the 2 usual contenders, Lindholme Elite and Drennan Barnsley finished neck and neck on 59pts but Lindholme Elite just snuck into 2nd place with a small weight advantage of 137Kg to 128Kg. 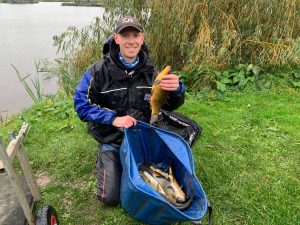 The Angling Trust would like thank Aaron & Neil Grantham and their staff at Drennan Lindholme Lakes for their help and continued sponsorship of this event.  Also thanks to Jemma Phillips and her team for managing the resulting process.  The full results can be viewed at www.match-angling.co.uk.


Why should your club or fishery get its Fishmark Certificate? Here, carp fishing legend and fishing…
Read more
We asked James Roche, one of our Partnership Development Managers, why you should forward this page…
Read more
A former police officer with over 30 years’ experience in the force has been appointed National Enfo…
Read more
What it means for angling The Angling Trust has now had an opportunity to consider the government’s…
Read more
The Angling Trust are sad to report the passing of volunteer bailiff Neil ‘Ted’ Pocock, who received…
Read more
Angling Trust CEO Jamie Cook explains why it’s important – but simple – for coarse…
Read more
It’s no secret that plastic is suffocating our seas. From tiny microplastics invisible to the naked…
Read more
The AT-TEFF are pleased to announce the appointment of Peter Scholes as AT TEFF Rivers National Coor…
Read more
Once again, government ministers have failed to approve proposals that would help control cormorant…
Read more
Invasive non-native species are increasingly present in our waters causing significant impacts on ou…
Read more
Anglers can today celebrate winning the first round in their battle to save an important bream spawn…
Read more
Angling Trust boss warns against ‘irresponsible actions’ that puts fishing at risk An angling club h…
Read more