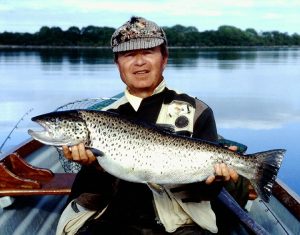 The history of angling is littered with great names of anglers who created their own aura of brilliance. Dick Walker, Ivan Marks and more recently John Wilson passed on having left an indelible mark on the sport we love so much. Now Bob Church has joined that legendary group and perhaps he was the most influential figure of all.

In the 1960s Bob was a prime mover in specimen hunting, as it was known then. A founder member of the highly-regarded Northampton Specimen Group, Bob’s varied approach saw him as a captor of huge fish of several species, especially barbel, chub, tench and pike.

Then came the fly fishing revolution on the giant Midlands reservoirs, especially Grafham and Empingham Reservoir, that became known as Rutland Water and it wasn’t long before Bob was the man. He mastered the art of tempting the trout that were stocked in these big lakes, often able to sort out the larger, overwintered fish.

Bob invented an incredible number of flies, designed to catch reservoir rainbows in both competition and leisure angling as well as the big browns that usually roamed the depths. Bob used lead core lines to reach the depths and used methods that were just about within the rules but catch them he did. I fished with Bob at Grafham as his boat partner and I learned more about boat fishing in those few hours than I could have imagined. I also bought one of the boat seats he designed!

He was also a fine angler on smaller stillwaters and I recall a day at the beautiful Chalk Springs where the water is so clear every speck of bottom can be seen in 12ft of water. It was a friendly competition called The Hat Trick where one each of the three stocked strains of spottie had to be caught…only this year there were four, with blue and gold strains of rainbow added to the regular rainbow and browns.

The event was divided into 45 minute segments and I spotted a pretty decent goldie in my part of Middle Lake. I tried it with tiny buzzers and bugs, unweighted nymphs and, out of frustration, dries that looked like one of the old Queen Mother’s hats as well as damsels, tadpoles and other large lures. It chased a couple but refused to eat.

The whistle to change pools was blown, I crossed the stream towards my next lake and Bob strolled up, cast out and caught ‘my’ golden rainbow before I’d reached East Lake! It weighed 8lb 9oz too.

I tench fished Sywell Reservoir with Bob for Tight Lines and he worked out what they needed so well we were the only two anglers with tincas on that day. Bob was a wonderful guest in the studio too; the biggest problem was getting us both silent at the same time and then, when we did start, to keep on track because Bob had so many diversions and tangents he could take on a subject. The hour of the programme was nowhere near enough.

I’ve just realised that I’ve written for Angling Times exactly the same number of years as Bob but whereas my column is opinion-based (if you hadn’t noticed…) Bob’s was far more practical and informative. He’s also written close to 20 books too, all superb in their own way whether advice/how to based or memoirs.

Bob is a tremendous loss to angling but he leaves behind an enormous legacy of his works, his tackle – rods, reels (large arbour fly reels are his idea) and clothing designs as well as the techniques (and boat seat) he introduced that are as effective today as they were the first time they ever saw the light of day.

His MBE was well deserved and it’s hard to think I won’t ever talk Cobblers to Bob again…well, he was Chairman and, on his retirement from the board president of Northampton Town Football Club. I remember telling him that my first visit to Arsenal stadium in 1954 was for a reserve match against ‘his’ team.

Even in his later years when Parkinson’s Disease made things so difficult for him, he was always smiling – and fishing.

My sympathies and condolences go to his lovely wife Jeanette, Steven and Nicola. Rest in peace Bob Church MBE. All trout are safer today.