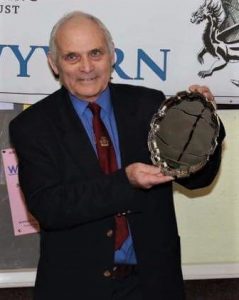 We are all very saddened to hear the news that David Rowe, one of angling’s most stalwart and dedicated volunteers and officers, has passed away following a long illness.

David’s earliest memory of fishing was angling with his father from the age of six or seven at Teignmouth. He started sea angling in earnest from the age of ten and continued until he left school and home and started work as a student apprentice with a major car manufacturer.

After marrying and returning to Devon in the early seventies, it became his main hobby because it enabled to spend quality time with his family and friends. He later became a member of the Wyvern Regional Committee of the then National Governing Body, the National Federation of Sea Anglers, and its chairman in 1986.

In 1998 he became the first Sports Council Development Officer for the sea angling. During his time with the Federation he developed the angling coaching scheme and serviced and managed the national teams for the sport at international level, including winning a world championship gold. His interest in conservation issues were developed through the NFSA conservation group and in 2005 David became a vice president of the world governing body CIPS with its sea section FIPS-M.

During this time he was invited to become a founder member of the European Angling Alliance whose sole purpose was to represent angling and its conservation issues at the European Commission in Brussels. The EAA has since become a powerful lobbying organisation in Europe and the Angling Trust is a leading member of this organisation.

He became the MAFF sea angling appointee to the old Devon Sea Fisheries Committee in 1996 and continued as a DEFRA appointee with its successor the Devon and Severn Inshore Fisheries and Conservation Authority, a post he held until his passing.

He retired in 2009 at the age of 67 as the CEO of the National Federation when the three governing bodies for the sport joined together to form the Angling Trust after many years of what he described as “intense and hard, but rewarding, work on behalf of sea angling.”

David also served as the secretary of the British Record Fish Committee and helped the Angling Trust develop this important body for anglers of all disciplines.

We are very grateful to David for all he has done for fish and fishing and we will miss him terribly, but remember him fondly. His warmth, humour and kindness were evident to the many, many people whose lives he touched.

Nigel Hewlett, who was a colleague on the British Record Fish Committee, added:

David was the first to greet me when I joined the BRFC about 15 years ago. He made me feel instantly at home. I only knew him through the committee but he would always greet me as if meeting an old friend. He always made me feel welcome and valued. His passion for angling and for the work of the committee were always clear. I count myself lucky to have known him.