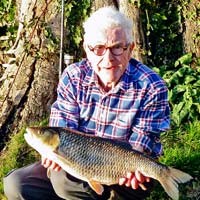 Just before the start of this year’s river season the world of angling lost one of it’s ‘greats’. Frank Guttfield, author, broadcaster, and an old school specimen hunter, who fought and subdued many big fish in his time, finally lost his battle with cancer.

I can’t remember exactly when it was that I first fished with Frank – probably around 17 years ago when I joined the Red Spinners. We both enjoyed fishing the smaller Thames tributaries around Oxford. Sadly they were already in decline but both the Windrush and the Evenlode still held a few fine specimen chub, roach and perch if you knew where to look. That was one of Frank’s great strengths, he really was quite expert at not just catching fish but at tracking them down.

For several years he ran a small syndicate on the Windrush of which I was a sometime member and he guided me on to a number of very welcome two pound roach which are still my favourite species today. But I guess it was chub fishing that was Frank’s speciality and he was certainly one of the finest exponents of light ledgering that I’ve ever seen. He knew how to balance the weight with the flow and would angle the line so that even a shy pick up from a big wary old fish would result in a gentle and hittable drop back bite rather than a sharp nervous pull and ejected bait.

Frank was a man interested in many things including politics and persuaded me that I should have him up to lunch in the House of Commons during my time there. I was happy to oblige and I shall never forget him pulling out a musty old file and regaling me with some conspiracy theory he had about corporate wrongdoing that I should be investigating. I asked him when all these shenanigans were alleged to have taken place and he said: “Oh .. sometime in the 1960s but I was just waiting until I met the right person to take this on!”

Although I politely declined Frank’s kind offer to immerse myself in a 30 year old case many miles from my own constituency we remained on good terms and he particularly enjoyed fishing with some of my angling MP friends including Charles Walker who now chairs the All Party Parliamentary Group on Angling. Frank even persuaded me to offer a work experience placement to his super bright young son Max who proved to be a great asset to my parliamentary office.

Frank could be awkward and irascible, charming and warm, grumpy and witty but there was scarcely a dull moment when he was around. There was always something going on in that sharp brain of his and it is a great shame that he has fished, written, spoken, loved and laughed for the last time.