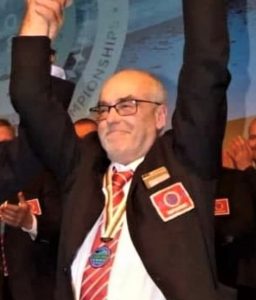 The Angling Trust would like to mark the sad passing of Ian Golds with a tribute to one of our country’s most respected and decorated international sea anglers. Ian was diagnosed with cancer in 2018 and fought courageously until his final day.

With an international career spanning 30 years, Ian represented England at World Championships on 27 occasions, including 23 as an angler and three as a team manager.

During that time, he won 14 medals including four gold, six silver – including individual silver in 2004 – and four bronze. In addition, Ian represented England in the Home Nations International adding a gold and bronze medal to his collection and won many high-profile competitions in the UK.

Ian was passionate about a sport that had provided him with so many memorable moments and in 2020 he launched a project he called ‘Kick the Bucket Ten Grand Challenge’.

His aim was to raise funds to support and promote junior and female participation at international level in the UK.  To date, the project has raised over £20,000 and all proceeds have been donated to the international teams of England, Wales, Scotland and Ireland.

Ian was an incredibly generous, kind and caring man, held in high regard and well respected among his peers, he will be sorely missed. Ian leaves two children Kris and Becky, granddaughter Ella-Mae, his partner Angela and three stepchildren Ashleigh, Danielle and Thomas.

The Angling Trust would like to convey our deepest sympathies to Ian’s family during this difficult time. A private funeral service will be held on 18 May, however there will be a live stream and further details will follow.