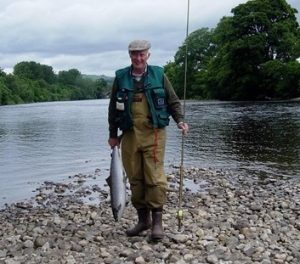 Jim Glasspool, who died on 7th September 2020, played a key role in the creation of the Angling Trust and Fish Legal and served as a director of both organisations.

As long-time secretary of the Test & Itchen Association, Jim was in many ways the embodiment of the chalk stream heritage and an influential figure in fighting to protect our freshwater environment.

He combined strong principles with great kindness; his ability to build trust between people played a critical part in bringing together our precursor organisations.

Mike Heylin OBE, friend and former director of the Angling Trust, recalls the role Jim played in the forming of the Angling Trust: “In the move toward angling unity, Jim was a key figure and used his undoubted skills to good effect, initially as Vice Chairman of the Fisheries and Angling Unity Group, known as the Moran Committee, under Lord Moran as chairman. In reality, the work fell on Jim’s shoulders and he successfully moved us forward through the various stages of unification until finally we could launch the Angling Trust.

“At the formative meeting of Fisheries and Angling Conservation Trust Ltd (FACT) on 17th January 2005 I had the honour of seconding the motion that Jim be appointed as vice chair, again under Moran, full knowing that effectively Jim would be running the show. At our next meeting on 24th March, Moran resigned as he had not been an active participant in unification and was appointed President while Jim was elected as the new Chairman.

“Jim worked diligently to bring people and organisations with him. I never once saw him in a temper although he was certainly sorely tried by some participants. He remained cool, composed and a gentleman throughout. His resolve and apparent lack of ego helped dramatically when others were not so sanguine. It was always hard to say, “No” to Jim and few did.

“At a meeting on 23rd June 2008, with Jim in the chair, it was agreed that a Transition Board be formed to convert FACT into Angling Trust. At the ensuing meetings Jim, in conjunction with Roger Furness, as vice chair, oversaw the legal and financial matters necessary in any merger with skills and ability which few others at the table had.

“As we approached the launch window in January 2009 we had resignations from three member groups of FACT who no longer wanted to be part of the project. Jim took the news equanimity, and I never did find out exactly what he thought of those who had worked alongside us for so many years only to pull away at the last moment. His ship sailed on and Angling Trust was launched as planned in January 2009. Without Jim at the helm it could so easily have sunk. That is the measure of the man who was Jim Glasspool.

“It was a pleasure to know him and to work with him. We and angling and fisheries owe Jim a great debt. Jim will be sorely missed by those of us fortunate enough to have enjoyed his company and ethics. I deeply regret his passing. His contribution was immense.”

George Graham, Fish Legal Chairman, said that as chair of FACT, Jim’s good humour and diplomatic skills, as well as a finely-tuned sense of when to push things forward, were instrumental in bringing all sides together in the merger that created the Angling Trust.

“A good deal is like a fish; if you leave it on the table too long it goes off,” was a favoured saying.

“I count myself fortunate that Jim was still serving on the Fish Legal Committee when I arrived. His insights and thoughtful decision-making processes were really beneficial. We will miss him.”