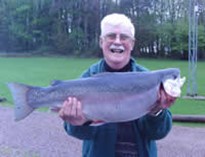 It is with great sadness that I write to inform you that John Maitland died peacefully on Thursday 13th August 2015 in Peterborough Hospital having endured very considerable challenges with illness and mobility, for many years.

He was born on 1st April 1933 and commissioned in to Royal Air Force in 1953. During his very successful career as a both a fixed-wing and rotary-wing pilot, he became a popular Chairman of the Royal Air Force’s Competitive Angling Association not least because of his love and passion for all types of angling and, in particular, fly fishing.

During a career spanning 39½-years he qualified to fish for the England International Fly Fishing Team. Following retirement from the Royal Air Force in 1993 in the rank of Group Captain, he became a very supportive member of the English Fly Fishing Association (EFFA) and held the position of EFFA President from 2009 until 2011.

His love and passion for fly fishing made John an extremely successful fly fisherman, exemplary fly tier, distinguished author and excellent company. He was a much loved husband to Jan and father to daughter Julia.

His gentlemanly qualities and stoic, Churchillian attitude of ‘never giving in’ regardless of the circumstances serves as a splendid example to us all. He will be greatly missed.