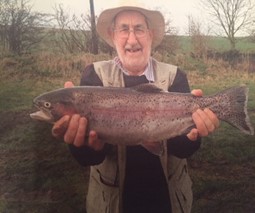 It was there as a child that Ken began his lifelong love of angling by exploring a large reservoir and several ponds nearby with his cousin Len.

From a young boy Ken started to record his fishing adventures in the form of fishing diaries. This is something that he continued working on all through his life. These included extremely detailed information on which fish were caught, or not as sometimes was the case! They also included wonderful drawings, photographs and what he described to his eldest son Ben as ‘’reflections and little anecdotes” about his life at the time.

Ken spent many hours on his fishing diaries, and he always intended for them to be read after his passing by his four sons: Ben, Tim, Mike, Andrew and his grandson: Jacob. They were all typed up, and professionally bound. There were also special copies for good friends he shared fishing holidays with. His love of angling took him to many countries including Spain, Canada, Russia and Africa to name but a few.

Ken was involved in many capacities with numerous fishing clubs over the years. He would use his experience from being a Chartered Accountant to help chair and treasure, as well as help with the books. Some of the clubs that benefited from his expertise, generosity and humour included Luton and Stewartby.

Fishing was more than a hobby for him it was a lifelong passion and way of life. Ken lived and breathed fishing, and the only thing that came before fishing to him was his love for his family and friends.

He is greatly missed, but never forgotten. 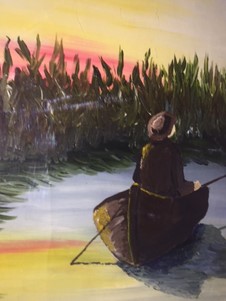 One of Ken’s oil paintings