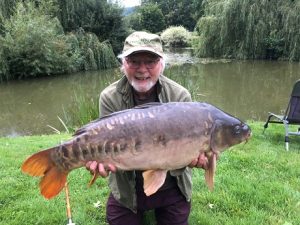 The Angling World has lost one of its true ambassadors and angling icons in Len Arbery.

Writing what follows isn’t easy for me, because I am very, very sad, a sentiment I am sure many of you reading this will share. Nevertheless, I’m truly humbled to have been asked to portray what follows by some of Len Arbery’s family and will do so to the best of my ability. Today, Len’s close family, his wife June, son Tony and daughter Karen, are experiencing the devastating loss of a husband and dad; nothing can compare with that.

Additionally, the angling community has lost a huge personality with his passing. As I sit and compose this now, I am shedding genuine tears, which I am sure will be shared by all of you who got to know Len over the years, and who knew him as a friend, gentleman, and truly great contributor to angling at all levels. Len was one of a generation of anglers who grew up both having to invent the tackle they used and also having to engineer and make it themselves.

For right or wrong, these days we sadly live in an era where the younger generation of anglers bandy around words like icon, legend, superstar with gay abandon. Can I respectfully suggest those of you who use these expressions, all stand back and look at the contribution Len Arbery made to angling and Carp Fishing as a whole, you may all be slightly humbled! Redmire Pool (along with Kevin Clifford), Carp for Life, The Haunting of Redmire Pool (with Adrian Curtis), Recollections (with his great friend Bob Buteux), Barbel for Life, In Pursuit of Big Tench, Royalty Days, Catching Big Tench and various other written contributions just add to that. He was a truly accomplished angler, with a list of captures that would be envied by many, even in today’s ‘easy world’ and a magnificent person, at many levels, as all of those who knew him will testify.

Throughout Len’s recent illness we have both talked on a regular basis, about how we would celebrate many of the carp fishing pieces of history he has collected over the years. They were not always easy conversations, but ones Len stuck to quite stoically as anyone who knew him would have expected.

The Carp Society will be working with his son Tony and others to produce a book, which will benefit June, Len’s wife and family as we move ahead. For now, I personally want to say, how sad I am at his passing. Rest in peace my friend, a sentiment I know will be echoed by many others. Go forward on your journey, secure in the knowledge you have made a huge contribution and will be remembered fondly by many! In the passing of time I might find it easier to share some of our recent laughter, and pain, but for now, Gods speed, thank you for your friendship, for your contribution to angling as a whole, and the laughter we both shared. RIP my friend. X

It was with great sadness that the Angling World received the news of Len’s passing.

Unlike the many others who had known Len Arbery since their 20s, I had only known Len for 10 years, but what an interesting 10 years they were.

We first met at a book launch and soon discovered we both had an interest in collecting old books and fishing tackle. On discovering my love of vintage Roach Poles he said he had two to sell which he would bring to my home. On arrival he said he could only stay for two hours and must be home for Sunday lunch. Four hours later we were still talking and a sound friendship was forged. Len was one of Angling’s true gentlemen, always happy to help solve a problem, courtesy of his vast engineering skills.

Whilst he was a good all round angler – he once held the barbel record – his early years of specimen hunting involved tench and carp, of which he wrote more than 5 books and co wrote Redmire Pool with Kevin Clifford. He was, of course, in the early Redmire syndicate with his good friend Bill Quinlan. Unusually, Len preferred a swingtip as his chosen method of bite detection for both carp and tench fishing.

In latter years he concentrated on the chub of the middle Thames, and touch legering with his favourite bait of cheese paste he caught chub to over 7lb.

In his last year of fishing he came to fish my small lake throughout the summer months for carp and tench. On one occasion, accompanied by his son Tony, they caught 42 tench. Other times he returned to his childhood days and used floating crust to take a number of 20lb carp, the best going 29lb.

Sitting together on one occasion he related the tale of a long weekend’s fishing with a friend. Nothing stirred, until they were about to pack up on Sunday morning when the fish suddenly began feeding and they carried on fishing. These were the days before mobile phones. When Len eventually pulled up at his friend’s house that evening to drop him off, a very angry wife opened an upstair’s window and hurled untold amounts of verbal abuse at him, banning him from ever entering her home again! We chuckled.

There is so much that can be written about Len, but I, like so many others, will always remember him as a kind friend and one of Angling’s greats. Indeed, a true gentleman. 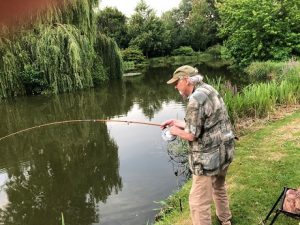 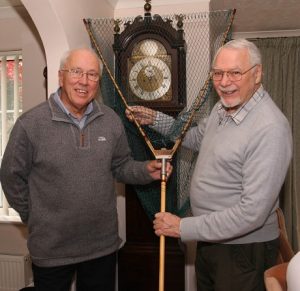