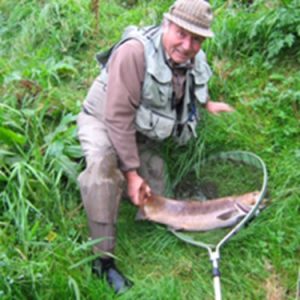 There was standing room only in the West Berkshire Crematorium as friends and family were joined by many from the world of fishing to pay their respects to Mike Stratton – the former Reading tackle shop owner, well liked countryman, one time world match record holder and, in his later years, a canny and renowned antique tackle dealer and successful fishery owner.

Mike was the eldest of two sons born to John and Winifred in 1935. He attended the prestigious Blue Coat School in Sonning from the age of 11 to 18 years where he became known as ‘wee Mick’ due to his size. A popular boy, who was extremely sporty and who loved to play cricket, he rose to become Head Boy of the school.

Michael wanted to pursue a career in farming but he contracted glandular fever and sadly had to give it up and instead decided to join the family retail fishing and gunsmith business with his father John and brother Peter.

John introduced his sons to fishing and hunting at an early age and Michael took an instant shine to fly fishing. He was also very interested in wildlife, particularly fish and birds. John bought some land in Theale beside the Kennet and Avon canal and he introduced some trout to the small lake there in the 1950’s. This piece of land also adjoined the same beautiful stretch of the River Kennet made famous by the writings of Dick Walker in his book ‘No Need to Lie’. It was here that the young Michael learnt much about coarse angling whilst being mindful of his father’s instruction not to disturb the fishing of such prestige luminaries as Peter Thompson, Bernard Venables, Fred and Joe Taylor and of course Walker himself, all of whom had obtained permission to fish the stretch.

In 1960, at just 26yrs old, Michael opened Thomas Turner’s fishing tackle shop, in Reading. Although he was, at the time, a keen salmon angler Michael established Turner’s as both a coarse and game fishing shop providing top quality tackle, bait, expert advice and excellent customer service.

‘What never changed was the character of the place, which was the outward and visible expression of the character of the owner, Michael Stratton. Mike was an all round angler, as passionate and knowledgable about casting a fly for salmon as trotting a caster for roach.

The attraction of Turner’s lay not so much in the gear, but the quality of the time Mike and his men gave their customers.’

Mike’s knowledge base and respect grew and he expanded himself and his business into various strands including:

From 1964 Michael became more interested in competitive coarse fishing and was an active member of Reading & District Angling Association eventually becoming team manager in 1977. He secured sponsorship from the Reading Evening Post to establish the Kennet Championship, one of the most popular competitions in local match calendar.

Michael fished the All England Team Competitions numerous times and became a successful individual match angler winning section places on the Thames Championship and many trophies and competitions. One time he missed the start of the match on the River Nene, in the Midlands, so he could not enter the pools. Inevitably he won the match but lost out on a substantial payout from the pools!

Perhaps his most well know feat occurred in October 1977 when he set a new world five hour match record on a local stretch of the Thames at Pangbourne with an incredible float caught bream haul of 175lb 4oz. This remarkable catch broke the existing record held by world champion angler Ian Heaps and made the front page of the Anglers Mail.

In Michael’s latter years he enjoyed his annual Salmon fishing holidays in Scotland, often on his favourite River Devron, where he became well know by the ghillies, keepers and fishing folk in the area. He also enjoyed fly fishing for trout on the Wilderness fishery – a location for the acclaimed Passion for Angling TV series.

In 1999 Michael ‘retired’ to Theale, just outside Reading, with wife Betty to setup and run Hayward’s Farm Trout Fishery. Here he was able to pursue his interest and love for fly fishing and antiques tackle and developed a popular internet site, with the help of his nephew, James, which attracted customers from as far away as Canada and Japan. This business expanded to the point where Michael had one of the most extensive collection of Hardy rods, reels and vintage tackle in the world. His advice was sought by dealers and enthusiasts from far and wide and if he did not know the answers Michael would study and research antique catalogues and books to give guidance. Despite being in his 70’s most of this knowledge was firmly embedded in Michael’s active and considerable brain and need for study was minimal for him. He was a true guru in his field and whoever acquires his collection will inherit a treasure trove of angling history.

Mike Stratton sold me my first pint of maggots when I moved to Reading over 30 years ago, he was free with his knowledge and advice and set many others on the road to a lifetime of wonderful fishing memories. He leaves behind his wife Betty, his three daughters Helen, Louise and Clare, some great friends and a legacy of some fine fisheries and a life well lived doing what he loved best.

With thanks to Michael’s daughter Clare and to Bill Green his long serving work colleague and loyal friend who continues to bailiff and tie flies at the Haywards Farm Fishery.