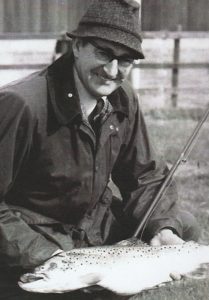 Norman Chown was a highly respected and active member of the English Fly Fishing Association from 1970 until he passed peacefully away in his home town of Northampton on the 14th January 2018.

Norman was a lifetime angler born in Northampton and as a young boy he roamed Kingsthorpe and the surrounding countryside on his bicycle. Snaffling bacon rind from home, going down Mill Lane to the stream, tying it to string and lowering it carefully into Crayfish holes, then up to the Merry Tom Stream with nets to catch sticklebacks.

Norman was best known at his local Pitsford Reservoir which he had fished since its official opening when he was a guest representing the business community of Northampton.

Norman was proud to represent England in the 1972 Loch-Style International on Llyn Alaw and in 1974 he caught a 6lb 10½oz Brown Trout at Grafham, the largest that season (pictured).

Norman also loved the pursuit of Salmon sharing a beat on the River Wye near Hay for years. Leaving work, he would drive across country for the evening, then drive home and be up again for work the next day.

Then there was the annual pilgrimage to the Thurso and for a few years he would join Frank Aran in his plane and fly up to Wick. Other times there would be car sharing and they never stopped overnight just a straight through drive of approximately 600 miles. Some of the equally mad culprits along with Norman and Frank, were Richard Dickens and Viv Church. This love of fishing made for great and lifelong friendships.

His daughter Lorraine recalls: “Father felt my brother and I should be educated and shown the beauty and heritage of this wonderful country. So, every bank holiday, suitcases packed, off we would go. It took years for us to realise that there was more to UK than rivers, lakes and reservoirs!”

In 1995 Norman won the English Fly Fishing Association’s Annual Match fished on Chew and he still fished with the Association until his 90th year and it was always a pleasure to share a boat with him, he will be hugely missed.