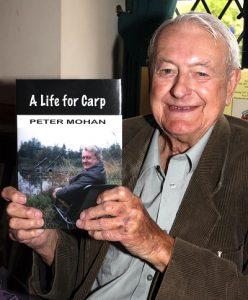 Peter Mohan was an iconic figure in the early days of modern carp fishing. His many books and writings, including the acclaimed ‘Cypry the Carp’, were inspirational to a generation of pioneering carpers as can be seen by this touching tribute from fellow carp author Tim Paisley:

There is always a universal feeling of regret when a high profile figure passes away, and Peter Mohan, who died in December at the age of 85, was one of the more prominent members of the world of carp fishing. Peter was an extremely influential figure in carp circles, and certainly someone who had a major influence on my life.

In 1969 Peter co-founded the BCSG with the late Eric Hodson. The BCSG was looked on as an elitist group for experienced carpers, so in the early 70s Peter formed the Carp Anglers Association (CAA), which was open to anyone. The CAA came into existence at a time when I was becoming captured by carp fishing, and I attended the inaugural meeting at Billing Aquadrome in May 1974. Mike Starkey was Peter’s second in command at the time and he was at the meeting. In reality it was my introduction to the wider world of carp fishing, and also to the world of publishing, in that Peter had with him the page proofs for his book Carp Fishing Step by Step at the meeting, to run through with Mike.

CAA members were encouraged to write for the CAA Newsletter, and tentatively I submitted a couple of pieces, both of which were used. They were of little consequence in the greater scheme of things, but seeing them in print was an encouragement, and gave me the confidence, and belief, to continue putting pen to paper, and rattling away on the typewriter. I became a branch secretary for the CAA, and met a number of my current friends from the world of carp fishing at those 70s’ meetings, including Greg Fletcher, Kevin Clifford and Rod Hutchinson.

Peter was a great organiser, and launched the national conferences that are now a familiar part of the carp scene. He could be a tad dictatorial, back then, and even his best friends would admit that he could be difficult. He was inclined to fall out with people, and it was the rumblings about some of his policies, in particular his declared aversion to angling politics, that led to the formation of the Carp Society in 1981, at the instigation of me and Greg Fletcher. The formation of the Carp Society led to the publication of Carp Fisher, ultimately the trigger for the glossy carp magazines of today. The Society’s Carp Fisher triggered the launch of the CAA’s The Carp Catcher (‘They fish for them, we catch them!), and through those two magazines, and the later commercial products, writing and photography have become an extensive and influential by-product of fishing for carp. It’s fair to say that Peter helped put that progression in motion, and I am not alone in thinking that he was the springboard for any publishing and writing success many of us may have had in carp fishing. Peter undoubtedly helped launch the carp-related careers of Mike Starkey and Kevin Maddocks, and ultimately numerous other carp writers, carp consultants, and tackle and bait manufacturers.

Peter was a man of many talents. He was an international table-tennis player, and played for Uruguay in the Stockholm World Championships (via a residential qualification when he lived in Uruguay for a few years). He was also an international bridge player and represented England in tournaments in several countries. He launched the first carp-only magazine, the BCSG private circulation The Carp, and had a number of books published between 1972 – ‘Carp For Everyone’ – through to his final, fitting book, published in 2014, ‘A Life for Carp’. Peter was an achiever whose influence will be felt in carp-fishing circles for as long as carp anglers meet, and read carp books, and magazines.

I attended Peter’s funeral at Bedford on 7th January, which was well attended by many of his old friends, from both carp-fishing and bridge circles. It transpired that his organisational skills had made themselves apparent in the world of bridge-playing in his last few years, and that he had even published a book on the subject! He was a man of many talents, but first and foremost he was a dyed-in-the-wool carp angler, from an era when such people were thin on the ground. The titles of his first and last books make a fitting epitaph: Carp for Everyone could be said to be prophetic, at a time when it was actually for comparatively few, and A Life for Carp was a fair reflection on Peter’s raison d’être. Thanks for the heritage you have helped create and pass on, Peter Mohan. RIP.