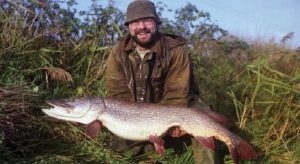 Professor Barrie Rickards was a distinguished palaeontologist who wrote prolifically on his subject and an ardent angler, the author or co-author of 31 books on fish and their habitats.

Richard Barrie Rickards, or Barrie as he was more usually known, was born in Leeds in 1938, the son of an engineer. A boyhood freedom to roam over the Yorkshire countryside nourished a talent for observing, documenting and interpreting the natural world. The young Rickards was a distracted pupil at Goole Grammar School, showing more aptitude for sports than for academic study, helping it to win the Northern Schools Cross Country Championships and going on himself to have trials for Wolverhampton Wanderers FC. Kept in the sixth form by his headmaster for his running prowess, Rickards excelled at chemistry and graduated in geology from the University of Hull with a BSc in 1960 and a PhD in 1963. He specialised in graptolites, an extinct group of zooplankton, which thrived in the Ordovician and Silurian periods (488-416 million years ago).

Rickards had short appointments at University College London, Cambridge, the Natural History Museum and Trinity College Dublin before returning to the geology department in Cambridge in 1969. There he spent his career as successively lecturer, reader and professor and as a Life Fellow of Emmanuel College.

His academic career can only be described as stellar, over the course of which he published more than 270 papers, winning the Geological Society’s Lyell Medal in 1997 and becoming Emeritus Professor in Palaeontology and Biostratigraphy at Cambridge. He was former curator of the Sedgwick Museum and his drawings of graptolites, of which he was a world expert, were exhibited at the Kettles Yard Art Gallery in Cambridge.

Rickards’s internationally renowned geological research mostly exploited the rapid evolution of graptolites to date the rocks from the time of greatest expansion of marine ecosystems in the geological record. He employed innovative techniques to study graptolites. Scanning electron microscopy demonstrated their relationships to living animals, while collaborations on their hydrodynamics progressed from simple models in swimming pools to wind tunnels and computer simulations. In addition, he showed that the enigmatic fossil Promissum pulchrum was an exceptionally preserved primitive vertebrate.

But for all his professional and academic achievements, it is as an angler and angling writer – he wrote more than 800 articles on fishing – that Rickards will be remembered by many. An avid fisherman, one of the first fish he caught was a 3oz perch and one of the last was a Nile perch almost 500 times as big. In between he pursued his favourite species, the tench, with a passion and, inspired by the great writer on angling Richard Walker, who died in 1985, he applied his analytical skills to the pursuit of pike and zander in his adopted Fenland.

Writing in a number of publications in the late 1960s, it was not long before his work took the long form and he began to publish books on fishing. Collaborating with his angling pal from university days, Ray Webb, the pair wrote Fishing for Big Pike (1971), which has gone on to become one of the most seminal works on the subject yet written. Although Rickards became an author in his own right in 1973 with the publication of Perch, he more often than not collaborated with other anglers, publishing three books with his great friend the late Martin Gay, Pike, Pike Fishing: a Technical Guide and Fishing for Big Tench.

Fishing was a hobby for Rickards but his approach to it was nothing short of scientific, to the extent that soon his achievements and stature in the sport began to mirror those in his professional life. He was a founder member of the Pike Angling Club of Great Britain, a former president of the Pike Society and later president of both the Lure Angling Society and the National Association of Specialist Anglers. In all of these positions Rickards’ insistence on the correct dissemination of information and his love of teaching shone through. He taught a generation of anglers to fish through his works and his talks and was a tutor well beyond the walls of his Cambridge college.

Having retired from full-time teaching in 2005 Rickards continued to fish and became a champion of angling through his fortnightly forum on the Fishing Magic website, where he staunchly defended the sport against its antagonists. A naturalist at heart with a giant collection of cacti in his Cambridge home, he was as much the fishes’ friend as the anglers. He studied the species he fished for, understood their habitats and their habits and preached respect for both, knowing how fragile their world had become. He was not afraid to criticise organisations that he felt misrepresented angling such as the Royal Society for the Protection of Birds, whose rank and file he respected but whose policy-makers he felt were narrow-minded and ill-informed, and indeed some anglers whom he felt treated their own sport with apathy.

All the while his pen never erred and he continued to add to his canon of 800 angling articles and 30 books. From a number of respected writers he was elected to write the biography of Richard Walker in collaboration (again) with Walker’s wife, Pat, which was published in 2007 to critical acclaim.

During his recent illness Rickards was working on his fishing diaries, which he had kept since the 1950s, a biography of Ray Webb, and had submitted Zander – How to Catch Them for publication. All the while he talked of future fishing trips with enthusiasm, including one to Australia, which was planned for this winter with his partner, Mandy Lyne, a solicitor.

Rickards’ dual fame as a fisherman and a palaeontologist was not widely known. He was too modest to advertise his fishing writings to the geological community and vice versa. Fewer still knew him as a sub-three hour marathon runner. However, generations of students remember him for his quietly inspiring teaching, and his friends for his integrity, optimism and sense of humour.

His only son died in 2000 and he is survived by his partner, Mandy, and two stepdaughters.

Professor Barrie Rickards, palaeontologist and angler, was born on June 12, 1938. He died of complications resulting from cancer on November 5, 2009, aged 71