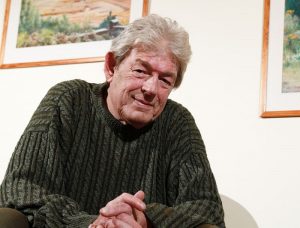 It would take a book to capture the essence of Rod Hutchinson, and even then you would have to leave so much out that it would only tell half the expurgated story. Rod was a war child, born during WWII, and a product of the sixties, a heady combination which in his case produced a highly intelligent, multi-talented, multi-faceted personality that struggled with some of the niceties of life, was prone to addictions and occasionally (make that frequently) took refuge from the realities of life by ‘smelling the roses’, as he put it.

In his prime he had a pop-star aura about him, and grown men could be lost for words in his company. His angling heroes were Dick Walker and Fred J Taylor, but Rod extended their thinking, and certainly their tactics, when his attentions moved on from specimen hunting to being serious about carp fishing. Rod had an enquiring, inventive mind, which led to him making major advances in the fields of tactics (bolt rigs were very revolutionary when he started using them with particles in the early 70s), tackle, rods and carp baits, a field which he pioneered and excelled in. Many of today’s most popular flavours were originally products of Rod’s inventive, scientific mind working in collaboration with commercial flavour experts.

He was a confusing mixture of a larger-then-life extrovert personality coupled with the need for privacy. He had a close circle of loyal friends with whom he was comfortable but beyond that circle he could be awkward and you never quite knew which Hutchy was going to show up. He was academically bright but was expelled from school for an incident which would probably see the master involved being expelled now. (When a hard-backed blackboard cleaner was thrown at him by the teacher Rod threw it back at him!) Fortunately his English master saw in him and praised his talent as a story teller and this was a talent we all benefited from in his carp fishing writings and meant I had the pleasure of working with him on a number of his books. Any book is an achievement, and to have played a small part in helping make some of Rod’s books available will always remain a matter of some pride. As a story teller he was unique, and some of the one-liners around which his articles and chapters were based were memorable. Back at a time when carp writers were thin on the ground Rod’s next monthly offering was eagerly anticipated and devoured with relish, as his books have been in more recent years.

Rod was a former footballer and boxer and loved his football and boxing on TV. He was a musician manqué and song writer and had a music room at home. He loved jamming with his mate Mally Roberts, ‘brother-in-law’ Keith and anyone else who was willing to sit around strumming and singing for hours on end. His pub singer imitation was a show stopper!

Rod’s first book was Rod Hutchinson’s Carp Book. Thereafter I had an involvement in the compilation and production of The Carp Strikes Back (many people’s favourite carp book), Carp Now and Then, Carp Along the Way Volumes One and Two and Carp Inspirations. We were working on Carp Along the Way Volume Three when he was taken from us so suddenly, unexpectedly and shockingly. That was how losing him felt to many of us. For as long as my generation of carpers had been carp fishing from the early 70s onwards Rod had been a public hero-figure, in my case first as a distant hero, then as an acquaintance and then as a friend. His recent years had been difficult following a series of detached retina operations which had limited his eyesight and eventually reduced his mobility. He didn’t take kindly to his developing inability to live life to the full, which put a restriction on his beloved carp fishing activities.

He was a family man who has left two daughters, Kath and Emma, four granddaughters and three great grandsons. He was hugely influential and the global outpouring of affection following his death has demonstrated the admiration he was afforded and affection in which he was held. He was talented, influential and loved well beyond the normal degree of esteem in which hero figures are held. For all his eminence, talents and achievements he was looked on as one of us, made good. He was special and has left a void which may never again be filled by one man.

He coined the expression for his new, unexplored carp waters ‘where dreams are still alive’, a quote which will be taken into carp fishing lore. Sadly the dreams are no more but his legacy and the memories will live on.

Tribute by Derek Stritton, on behalf of the Carp Society

It was with great sadness that the Carp Society heard of the recent passing of Rod Hutchinson. Rod was a life member of the Society, and fondly remembered for the many slide shows he gave at our conferences and regional meetings over the years, the first of which was at our inaugural meeting in May 1981. He was also a great supporter of our junior events.

Rod was, without doubt, a true pioneer of carp fishing, not only in this country but across Europe as well. Much of today’s thinking about carp fishing reflects Rod’s early writing and his massive contribution to the tackle trade.

On a personal level, I first got to know Rod at Johnson’s lakes in Kent, where I often went to visit Fred Wilton, and then later when I fished alongside him at Savay Lake and North Harrow in the Colne Valley during the early 1980s. Although a very talented angler, Rod was also very down to earth and had a wonderful sense of humour. Some of his stories could make you laugh so much, that your sides would hurt!

Rod will be fondly missed by the entire angling community, already demonstrated by the many tributes paid to him. Carp fishing has lost not only a great character, but also a “true pioneer.” The Carp Society has lost a “true friend!”

Go forward on your journey Rod, secure in the knowledge that your memory and writings live on, and that you will be remembered always as a carp fishing hero, and admired by the many anglers you inspired along the way! 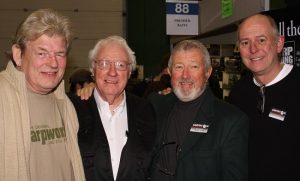