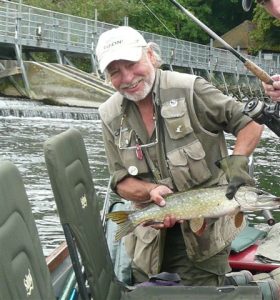 I can think of few more appropriate souls whose passing typifies the allure of this shared watery world than Roger Wyndham Barnes – the last of the Thames professional angling guides whose death, following the diagnosis of a brain tumour in 2013, prompted a flood of affectionate tributes from far and wide. John Bailey, Keith Arthur, Jon Ward-Allen, Keith Elliott, Ian Welch, Steve Wozniak and many more have penned generous memories of this lovely man. But we start with the words of his good friend John Buckingham.

“Roger was many things, artist, writer, bluesman, biker and great storyteller, but above all he was a natural countryman and had the ability to read a river or a landscape. He wasn’t just in the countryside he was a part of it, and the spirit of the river, its moods and its seasons, flowed in his blood.”

Although an accomplished writer Roger never sought a high profile for himself, preferring simply to pass on his skills and love for the river to others. He wrote not to deadlines but when the spirit grabbed him and some of his observations in publications such as Waterlog and Thames Guardian and for the Golden Scale Club are heartfelt celebrations of the natural environment. Hardly surprising then that he was a staunch supporter of the old ACA and subsequently a member of the Angling Trust. I first came across his musings in a series of delightful contributions he provided for our local Twyford & District FC newsletter. I loved the way he always signed off with the words ‘Enjoy the River’ – something we should do over and above just catching fish.