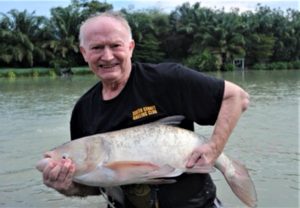 Steve Smart passed away in hospital on 24th April, 2018, after a terrible accident when a car collided with him as he was stationary waiting in traffic.

Steve was born in 1951, known to his friends as ‘Smarty’, was a keen footballer and cricketer in his younger days, and a lifelong angler.

He lived all his life in the village of South Cerney, Gloucestershire, in the heart of what is now known as the Cotswold Water Park. He spent much of his working life with Bradley’s Aggregates, working with the gravels dug from around his local area.

Smarty had been a popular member and character of South Cerney Angling Club for over 50 years, fished many club matches, regularly represented the club in the Nationals but also spent many fishing hours introducing his friend’s children to fish.

In more recent times Smarty has been fishing just for pleasure, and had become a keen barbel angler, but also fishing for various other species on SCAC waters. Earlier this year he gained even more angling experience whilst holidaying with friends in Thailand, catching several very big fish

He was a regular and very keen volunteer in SCAC’s coaching activities and in 2011 gained his Level 1 Coaching Qualification, of which he was very proud.

Not only was he a good angling coach with great technical knowledge and ability, he was also an entertainer and knew how to make fishing fun for those he taught. I don’t know who used to laugh the loudest, him or the children or their parents. He would also try to help his fellow coach and also gave us a laugh too, especially with his Smarty-isms, such as “you should fish towards the aeronaughts” (aerators) or “I’m in a catch 45 situation”.

Steve will be greatly missed by family and friends.