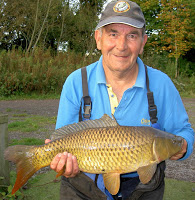 I first got to know Terry at the end of the 60s during South West Angling Times Winter League matches, his dad Sid and I were in the same team. Terry was a Systems Engineer working on Concorde and was sent on French lessons but I don’t think the language stuck. Later he started his own business servicing quarry equipment.

I am not sure what year it was but Terry won every single section in the South West Winter League which was amazing considering there were 14 teams. After this he was referred to as the “one man band”. The feat has never been repeated.

I remember drawing next to Terry in an open match on the Fry’s section of the Bristol Avon and could only watch in amazement him fishing the far bank in 13 foot of water (where the flow was) using bread over home made bread groundbait. He easily won the match that day with 21lb of skimmers, roach and hybrids. No crow quills for Terry, he used a homemade float which I copied – all balsa with a wooden antenna. The interesting aspect of these floats was they could be used top and bottom or waggler – crafty.

Through us both having sons of similar age, all keen to learn match fishing, we became good friends and supported the lads in the various leagues. I remember his son Dave winning a Junior match on the Crane with 18lb of chub from the New Fence Swim, Terry was over the moon. Later we fish the Dads and Lads matches and Terry and Dave won it at Huntstrete with a late 6lb tench, pushing Steve and me into second place. Both our sons went on to fish the Junior National on the Bristol Avon.

Terry loved his carp fishing, particularly fishing in traditional ways, but was equally at home catching silvers. He loved the Hunstrete fishery more than any other and was the record holder until one day I drew peg 16 and Terry was on next peg 15. Terry weighed in 120lb but I was to take his record with 201lb. Typical of Terry, he was the first to congratulate me.

Terry won more matches than most matchmen have had hot dinners. Any venue and method – he did them all. Later in life he focussed on local venues – Hunstrete and Viaduct.

He used to call me regularly especially when “My Dave” did well in a match. He was so proud when this happened.

Terry lived for fishing and fishing lived for him. He was the most focussed angler I knew. RIP matey, you will be sorely missed by me and many others.