The Angling Trust & Fish Legal are saddened by the news that His Royal Highness The Prince Philip, Duke of Edinburgh, has died at the age of 99.

A passionate advocate for wildlife and the environment, Prince Philip was patron of Fish Legal since its formation in 2009 and for many years beforehand was patron of the Anglers’ Conservation Association, being highly supportive of its aims to protect waters from pollution and other damage.

“Pollution of river waters has been the main cause of the decline of fisheries. Without the efforts of the ACA, altogether too many rivers would have become sterile. The support of the membership and the hard work of committees, of officers and staff have ensured that the ACA has been able to campaign vigorously and effectively to protect the cleanliness and viability of so many of our rivers.” HRH Prince Philip, Patron of ACA.

Prince Philip was widely praised for campaigning against overfishing in the oceans and his commitment to conservation internationally, becoming the first President of the WWF-UK when it was founded in 1962 and President of WWF-International from 1981-1996.

In a BBC interview, he once commented:

“I think it’s marvellous we have such a fantastic variety of life on this planet, all interdependent. I think also that if we humans have the power of life or death – or extinction or survival – we ought to exercise it with some sort of moral sense. Why make something extinct if you don’t have to?”

Prince Philip was a keen angler and in recent years fly fishing became his favourite pastime at Balmoral, going out for hours with a ghillie in all weathers.

“As long-term patron of Fish Legal and the ACA before that, His Royal Highness has been a passionate ambassador for conservation and supportive of our efforts to protect waters from pollution for fish and fishing. On behalf of all of us at Fish Legal and the Angling Trust, I extend my sincere sympathies to Her Majesty the Queen, to the Royal Family and to the family of His Royal Highness at this very sad time.”

“His Royal Highness was a lifelong angler who passed on that gift through every generation of his family. He was also a staunch conservationist and has left a legacy through each generation which has amplified the need to protect our natural environment. His support and patronage of the ACA and later Fish Legal was testament to his commitment in this area. We send our sincere condolences to Her Majesty the Queen and to the family of His Royal Highness at this sad time.” 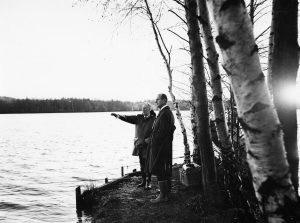 On a visit to a fishery at the Sevenoaks Wildlife Reserve, Prince Philip met representatives from the Bromley & District Angling Society and Kent Wildlife Trust and commented on how well anglers and birdwatchers worked together to protect nature and the environment.


We first met Aisha Mohamed-Goodlett when she helped us get fishing involved in Sport England’s…
Read more
Congratulations to John Vernon on booking his place into the FishOMania grand final in July.  John q…
Read more
Sue Galloway is a Licenced Level 2 Angling Coach who helped run special ‘Fish-a-Bility’…
Read more
A programme, developed in Essex, England, is changing the lives of military veterans by helping them…
Read more
The Angling Trust’s Get Fishing campaign to get more people fishing more often. We will be sup…
Read more
A huge congratulations to Jamie Hughes for winning the Weston Pools FishOMania qualifier on 8th May.
Read more
Joint patrols have been carried out on waterways in Northamptonshire to crackdown on anglers fishing…
Read more
Congratulations to Simon Skelton on winning Lake View Fishery FishOMania qualifier on 5th May. Simon…
Read more
Wildlife crime officers from Humberside joined the Angling Trust and the Environment Agency in a cra…
Read more
Sign the petition now to save angling on Admiralty Pier, Dover.  On Thursday 6th May, representative…
Read more
In June 2020 the Benyon Review on Highly Protected Marine Areas (HPMAs) was published. While welcomi…
Read more
From drowned trollies to discarded drugs, anglers have been removing waste from our waterways this s…
Read more