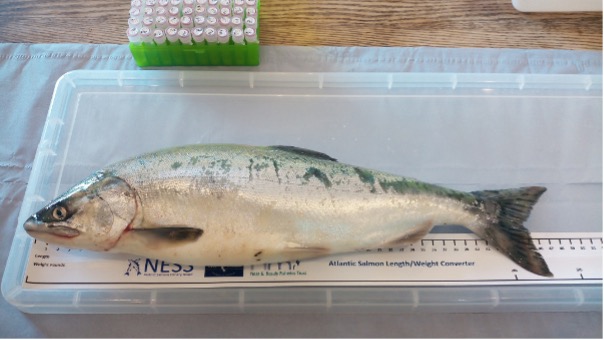 The Angling Trust are asking anglers to be on the lookout for pink salmon and red skin disease in UK rivers this summer.

Originally introduced into Russian rivers in the 1950s, pink salmon have slowly spread westwards and can be found in large numbers in Scandinavian rivers. This species has a two-year life cycle and often spawn in rivers in the summer. Large numbers were reported in Scotland in 2017. During 2019 smaller numbers were reported but early indications from Norwegian sea fishery catches suggest larger population of pink salmon could enter Scottish rivers this year.

Updated advice for fishery managers and anglers on what to do if you capture or spot pink salmon in England, Scotland and Wales has been published and can be downloaded here:

Guidance for Scotland – plus a page for reporting captures and sightings in Scotland.

Anglers are also being asked to be vigilant for wild Atlantic salmon infected by red skin disease. Affected individuals exhibit unusual haemorrhaging on their underside which can appear like a spotted red rash. The rash can either be localised or cover some or all the underbelly of the fish. Low level mortalities with these symptoms have been reported in the past few years in Norway and Ireland. The first case in Great Britain was reported in Scotland in the summer of 2019. Whilst there have been no reported cases of mortality associated with this disease in England and Wales, there have been increased reports of salmon exhibiting these symptoms this year in Wales.

The cause and impact of this disease is currently unknown. Lethargy and mortality have been reported in some rivers, whilst other fish appear in to be in good health and it believed could recover from the disease.

Anglers that suspect they come across an infected fish should contact their national incident hotline immediately but should not remove or handle a fish in distress. Photographs of fish with potential symptoms are useful but should only be undertaken where it is safe to do so. Where any fish has been caught it should be returned to the water as quickly as possible.

To minimise the risk of the disease between accidentally spread between waters we urge all anglers to follow good biosecurity practice and check, clean and dry their waders, nets and other wet equipment after every fishing trip.